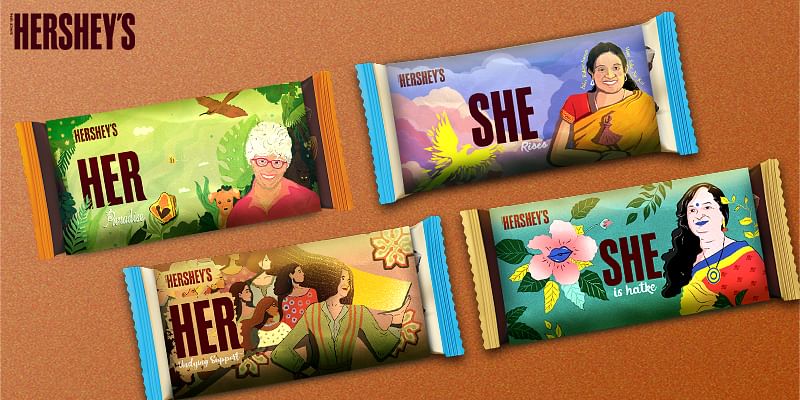 Around the world, women have always been at the forefront of social change. Even in the eye of the pandemic, doctors, nurses, teachers, and mothers have turned their lives around to make sure that the world continues to spin on its axis. It is no secret that women are the true heroes of the world that we live in.

Celebrating the HER and SHE in Hershey’s

It is not just the traditional roles that women continue to excel in, but the avant garde, the unusual and the experimental too, where they keep pushing limits and piloting the improbable. They do not however always get their due and this is where chocolate giant Hershey India decided to step in to make a difference.

In an innovative twist, Hershey India decided to celebrate the work of some of these heroes working in diverse fields through an exciting HERSHE campaign. For a company that has always put its weight behind gender diversity and acknowledged the power of women to change the world, International Women’s Day was just the right occasion to take another step in that direction.

The idea was to recognise the success of some of India’s unsung women achievers and turn the beloved chocolate brand’s packs into a canvas for celebrating their achievements. This was made possible by partnering with some of the up and coming women illustrators who helped to recreate the personas and journeys of the women who were being honoured. The artists recreated the life stories of four remarkable Indian women onto eye-catching creatives that went towards making inventive wrappers for customised Hershey’s packs. Though not for commercial sale, these customised packages have been shared with women leaders, who are being commemorated. This is something women across the country can draw inspiration from.

The four women whose work has catalysed change in different fields were chosen to be honoured in this novel initiative. Here’s a look at the dynamic women who continue to blaze a trail in their chosen path.

Roxanne Davur – An angel for animals

Roxanne has dedicated her heart and soul to animals. After working extensively in the hospitality industry, she took the plunge and moved to Karjat, a small town near Mumbai. There, she founded her own animal shelter called “Probably Paradise”. What began as a passion project has developed into a social cause – the shelter caters to abandoned, injured, and handicapped animals. Roxanne is also a fierce animal rights activist. Her shelter houses domestic animals such as horses, pigs, and donkeys, to name just a few. She aims to expand her shelter and to continue working in the service of her furry friends.

Anandhi Kumar, a self-starter illustrator has recreated Roxanne’s persona for the Hershey’s campaign. Anandhi, who leads design for two global brands, derives inspiration from the world around her.

The founder of SHEROES, an online community for women that offers support, resources, and opportunities, Sairee is synonymous with strength and upliftment. She has been instrumental in the intersection of technology and women, and her work has been largely dedicated towards gender parity in India. Sairee has an illustrious career in media and is also the recipient of some prestigious awards such as the Femina Women’s Award, Devi Award, and Most Powerful Women in Business Award, to name a few.

Sairee has been illustrated by Surabhi Banerjee for the Hershey’s campaign. Surabhi is an architect and an illustrator and let’s her art do most of the talking.

Dr Kriti Bharti has revolutionised the lives of many young girls through her NGO Saarthi Trust. She kick- started her career by working with several NGOs and counselling young girls who were victims of sexual assault and child marriage. She is also the first annuller of child marriage in India. Her NGO works towards rescuing hundreds of children who are forced into matrimony as minors and provides them restitution and rehabilitation. So far, she has managed to save the lives of thousands of girls in the country. She has also been honoured as a change-maker for her work in Girls Not Brides: The Global Partnership to End Child Marriage.

Kriti and her life have been brought alive for Hershey’s by Maanvi Kapur, a visual artist from Bangalore, who has worked extensively in graphic design with Netflix India, Amazon, BBC Media.

Falguni, currently a professor of marketing at MICA, Ahmedabad, has dedicated over two decades of her life to advertising and marketing and has been published in numerous international journals. Falguni has been one of the leading voices in body positivity and has delivered several TED talks on the same subject. Her work has been largely geared towards gender equality, LGTBQ rights, and body positivity. Her research projects have facilitated the understanding of women in media.

Falguni’s achievements have been recreated in art by an array of experienced designers namely Anushri Saraogi, Shwetha Vishwakarma, and Tanya Paul for Hershey’s. These talented women, between them, have years of experience in creative arts and advertising.

By honouring and highlighting the works of these women at the cutting edge of change in India, Hershey’s aims to encourage more women to take a leap, to pursue their passions. The company wants to take the HERSHE campaign forward by inviting consumers to share stories of women heroes who have been a source of inspiration in their life. These selected stories will not only be illustrated on a commemorative sleeve but will also find a mention on the Hershey India social pages. There are many illustrious women out there doing great work that needs our attention and Hershey India is keen to tell their stories.

The world is on the precipice of change; it’s only waiting for women to take charge. Keep an eye out for your woman hero.