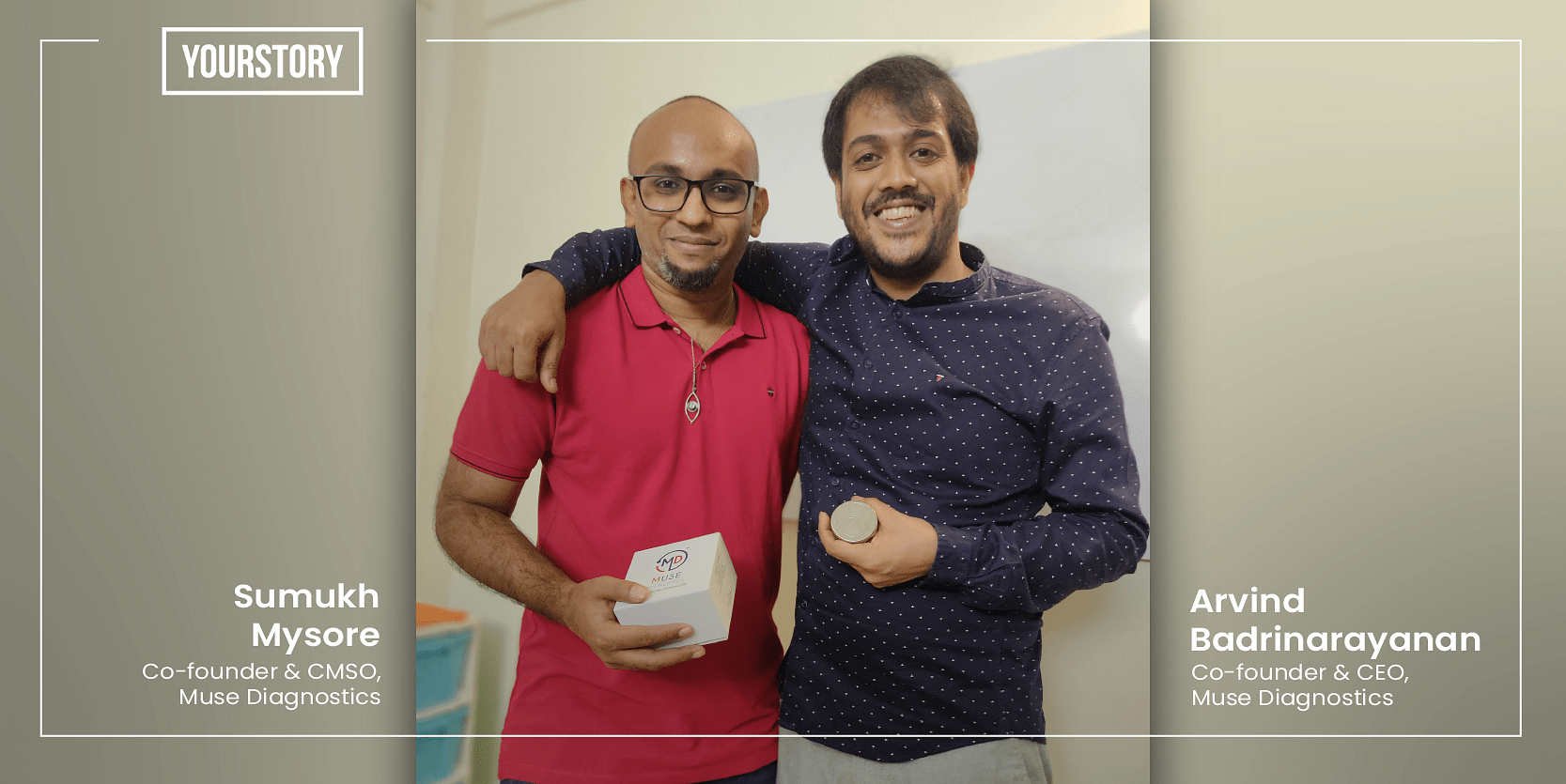 A veterinarian, a sound engineer, and a geneticist came together six years ago to modernise the 150-year-old stethoscope, build analytics around the same, and expand its use case beyond doctors.

In 2016, Arvind Badrinarayanan and Sumukh Mysore conceptualised digital stethoscope “Taal”, which ‘captures’ body sounds and builds analytics for screening and diagnostic purposes, besides empowering it with additional digital capabilities.

In a span of two months, it has sold over 100 units, primarily to telemedicine companies, and is looking at a positive growth trajectory in the future on the back of high prevalence of cardiovascular and pulmonary diseases, rising demand for teleconsultation, and advancements in the technology for sophisticated medical devices.

Practicing as a full-time veterinarian in Bengaluru, Arvind had received a vinyl LP of a dog’s heartbeat and wanted to extract digital heart sounds from it to run through a diagnostic algorithm. He took it to a music studio, where he crossed paths with his co-founder Sumukh. The latter was recording one of his songs, when he got into a conversation with the doctor on “how sounds can be used to draw analytics”.

“We drew inspiration from music application Shazam that identifies songs by analysing the captured sound and seeking a match based on an acoustic fingerprint in a database of millions of songs,” says Sumukh, who worked in the National Centre for Biological Sciences (NCBS) as a geneticist.

The device, along with its companion app Surr, was initially conceptualised for the clinical faculty in the education sector who teach auscultation. With a traditional device, educators have not been able to communicate the real-time nature of body sounds to the students, and subsequently unable to test or help them practice their auscultation skills.

In 2018, the bootstrapped startup raised Rs 50 lakh under Biotechnology Ignition Grant (BIG) Scheme, Department of Biotechnology, which enabled the startup to move from low-cost prototype to high tech and affordable digital stethoscope. It is also funded and incubated by C-CAMP, which is now a co-investor in the startup.

As the pandemic kicked in, Taal found its product-market-fit beyond the education sector in telemedicine, consumers, and intermediaries, and started reaching markets.

A traditional stethoscope has only mechanical filtering and no amplification ability. Building on the same, Taal is designed to mechanically and electronically filter body sounds and give users control over volume and further filtering to hear body sounds.

It can easily be connected through an Aux or a USB and the sounds can be observed, recorded, edited, stored, analysed, and shared through the app. An audio jack can be used to directly plug in headphones/earphones, smartphones or both concurrently with a splitter.

It can be used for telemedicine through a secured sharing and integration application with various other platforms. It comes with a separate emergency and consultation mode for quick recording, and has an offline mode in case of poor internet connectivity.

The device finds its use case in three major segments —telemedicine, rural healthcare, and education.

The former opportunity was elevated post pandemic as demand for virtual healthcare increased. The founders aim to place ‘Taal’ as a smart device, which can be kept at home or become a part of future first aid.

Users can share the recorded sounds through the app with specialists in cities and abroad for consultations and referrals or as a part of their basic medical check-up. They can also get some basic immediate provisional analytics.

“We are building a library of the symptoms and training the algorithm on the same. The validity of the solution is very important and hence the device is not here to replace a doctor, but to make diagnosis and treatment much faster and efficient, especially in rural areas. It is not a conclusive but an assisting device,” says Arvind.

This brings in a huge opportunity in rural healthcare, especially in areas with dearth of medical specialists. An Asha worker or a midwife can be equipped with this simple device and can easily share the sounds with doctors via the app to get immediate medical care. The stethoscope also has the capability to check the health of an unborn baby or a premature born child.

“Taal has the potential to disrupt rural healthcare. The virtual diagnosis can become more efficient, emergency cases can be dealt with better and early detection and treatment can be provided across regions,” says the founder.

The device holds its major USP in pricing. A traditional stethoscope starts from Rs 2,000 (introductory device, typically used by fresh graduates) and goes up to Rs 25,000 (for professionals), with very limited options in between.

In comparison, Taal is priced at Rs 11,500 ($150) while its next best competitor AyuSyn costs around Rs 16,000. The latter has been developed by Ayu Devices, a startup operating out of IIT Bombay’s technology business incubator.

“There could be other products in the market, but we find our USP in low pricing and simplicity. Owing to our strong team of science and audio engineers, the sound is much more fine-tuned and multi-disciplinary as compared to that of other digital stethoscopes,” says Sumukh.

The startup is working with professors and data scientists to train the algorithm for detecting individual health conditions. At present, it has capabilities to detect, what it calls, “healthy and unhealthy sounds”, which can give an alert for an emergency case or serious heart, lung, and bowel condition.

Besides its use for humans, Taal has the potential to be used with animals. “We have sent our devices to vets across Europe and US for trials, besides hospitals in India. Taal is a customisable stethoscope, which comes as another advantage for us,” says Arvind, adding that the startup is in talks with government organisations for collaborations besides certifications in US and European markets.

The recent funds would be deployed in strengthening the sales team, distribution network, and the supply chain, along with research and development.

The B2B startup, which sells its product through its own website and offline distribution channels, claims to have a significant organic online demand through its website.

“Taal is a revolutionary product that will have a far-reaching impact in assisting doctors, nurses, and healthcare workers in both primary and secondary healthcare. The solution with a global implication is all the more important as a household device, considering the pandemic and the need for a handy pre and remote diagnosis,” says Katsuya Hashizume, Executive Officer from Beyond Next Ventures.

How Startups Should Implement Data-Driven Marketing To Drive Growth