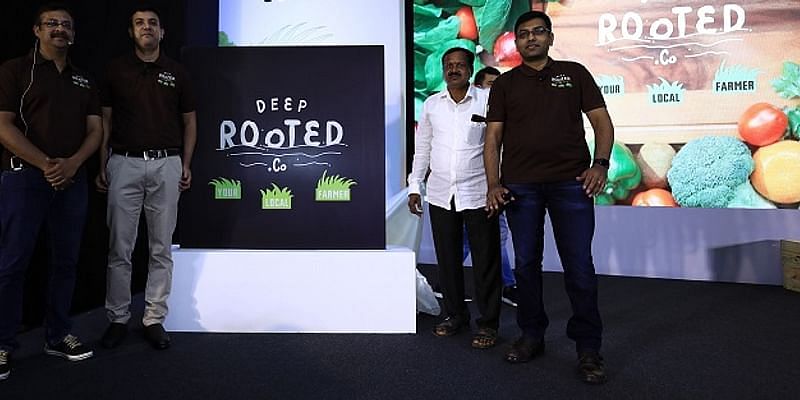 Sometimes, it takes a pandemic to start a brand.

Until early last year, Gururaj Rao, Arvind Murali, Avinash R, and Santosh Narasipura were managing 100 acres of greenhouses, supplying vegetables to 130 restaurants in Bengaluru, and were happy that their farm-to-fork business was growing, when the pandemic and the ensuing lockdown almost brought it to a standstill.

The founders had to act fast or burn cash and eventually run out of money.

As saving the business was their priority, they decided to send the trucks to apartment complexes to supply fruits and vegetables to people, who could not visit retail stores. What started out as a means of survival turned into daily delivery routes leading to 60 apartments in Bengaluru.

This success, of selling directly to customers at a desperate time, led the founders to create a brand called ﻿Deep Rooted﻿, a direct-to-consumer (D2C) farm-to-fork business that sells packaged and curated fruits and vegetables.

“By August, we were thinking of launching an omnichannel brand and business,” says Avinash. “By the third quarter of last year, our D2C idea became a reality.”

Deep Rooted.Co is also available as a mobile app, on which consumers place orders for fruits and vegetables grown on farms contracted by the brand. The app’s algorithm gauges consumer demand and enables farmers to plan their next production season.

More than 70 fruits and vegetables can be ordered on the app. Deep Rooted.Co also packs vegetables and sells them under its brand name at more than 150 retail stores, including Spar and Star Bazaar, in Bengaluru and Hyderabad.

The path leading to the brand

Classmates until Class X, the four founders had worked in the information technology and manufacturing sectors before turning farmers.

An MBA from Cardiff University, Santosh had worked in his family’s manufacturing business. Avinash, a tech graduate, completed his MBA from University of Mannheim in 2010 and worked with RBEI and Aavishkaar Capital.

Like Avinash, Gururaj has a tech background, with an MBA degree from ISB. He went on to work with Myntra. After earning an engineering degree, Aravind worked in various corporate roles.

The four of them decided to start farming in 2018 on a small farm owned by Santosh. They wanted to implement data and technology and capture insights to produce vegetable and fruits of high quality at scale by improving the productivity of the land. They started their business-to-business farm venture, Clover Ventures, where they aggregated 100 acres.

As part of the Deep Rooted.Co venture, the founders work with more than 70 farmers on 100 acres by implementing greenhouses to grow crops for Bengaluru and Hyderabad. In 18 months they want to double the number of farmers and crop area under management. The company will expand to Pune, Mumbai and Chennai in a year’s time.

According to consulting and investment banking company Avendus Capital, the D2C segment is projected to have a $100-million addressable market by 2025, with India expected to have more 3,000 such brands across categories.

When the pandemic hit the B2B business hard, the founders started their B2C venture to ensure that contracts with farmers did not suffer.

“We did not want to abandon any farmer who had grown crops for us,” says Avinash.

Now that their little B2C delivery experiment has worked out and services more than 400 orders a day, they plan to ramp it up to 1,000 by the end of this year.

”In the brick-and-mortar retail business, we have managed to stock very few items in stores,” says Avinash.

“It’s more like a shop-in-shop format to encourage people to experience the brand.”

The D2C startup is now aiming to sell its branded fruits and vegetables at 500 more retail stores by 2021-end, they are currently in 150 stores.

Deep Rooted.Co competes with online grocery marketplaces including ﻿Grofers﻿ and ﻿Bigbasket﻿, but offers a farm-to-fork value chain with traceability and zero use of pesticides as its USP. The founders say they guide farms to use data-led methods for growing crops to the startup’s standards.

Being privately owned, the founders did not want to disclose their fundraising plans for Deep Rooted.Co. However, they said the D2C startup had been funded with $5.5 million raised in a Series A round for their B2B business.

The founders expect revenue for Deep Rooted.Co to grow steadily and touch $1 million in the next 18 months. By FY22, they also aim to garner 50 percent of revenue from Deep Rooted.Co and the rest from their B2B venture, Clover.

Has advertising and marketing industry been disruptive or elevated during COVID-19?