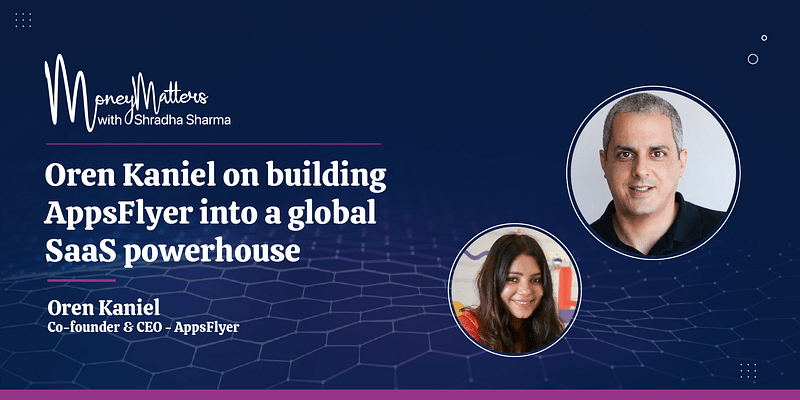 And that is what the decade-old SaaS company helps its 8,000+ technology partners and 12,000+ brands make through its app analytics platform.

Founded in Tel Aviv in 2011 (and now headquartered in San Francisco), AppsFlyer became a unicorn in January 2020, after raising a Series D round of $210 million led by General Atlantic.

“At a $1.6 billion valuation, AppsFlyer has become the first and only unicorn in the attribution category,” Co-founder and CEO Oren Kaniel wrote in an official blog post.

It went on to raise an undisclosed follow-on round from Salesforce Ventures at a valuation of $2 billion in November 2020.

The backing of marquee investors aside, Co-founder Oren believes customers are the “lifeblood” of AppsFlyer. “It starts and ends with customers,” he says.

“From the beginning, it was clear to us that someone needs to be able to measure and enable customers to make very basic decisions,” Oren tells YS Founder and CEO Shradha Sharma in an exclusive interview.

The result: Today AppsFlyer is one of the fastest-growing SaaS startups in the world, and one of the top five such companies in the US.

Its privacy-focused offering allows mobile marketers to measure the impact of campaigns, track organic and inorganic installs, user engagement, returns on every dollar spent, and gather data-led insights for decision-making. “The accuracy and quality of the data is really important,” says the founder.

Riding on the pandemic-led surge in app installs, AppsFlyer crossed an ARR of $200 million. This, despite its “revenue is secondary” mindset. It’s a framework that maximises long-term value for customers and shareholders over short-term gains for the company.

Describing the principle, Oren wrote on LinkedIn, “Revenue is a misleading and lagging indicator. I believe that optimising short-term revenue has a significant negative impact on a company’s long-term success, risk profile, customer value, and eventually shareholder value. In the last couple of years, we’ve been working with a strictly long-term framework. We always try to envision the market and AppsFlyer in 5-7 years, and measure our present decisions in that time frame… As counter-intuitive as it may sound, making revenue secondary is exactly what allowed us to grow it rapidly.”

Today, AppsFlyer’s sprawling empire consists of 1,200 employees across 20 offices in various parts of the world. Its product dashboard is available in English, Chinese, Japanese, French, and Spanish.

Why India is an “interesting” market

Prior to this, he was AppsFlyer’s country manager in India for six years, and was responsible for growing its presence across industry verticals.

Founder Oren calls India  — and developing countries in general — a “very interesting” market. “We have a sense of purpose when we’re serving these regions. India is extremely important for us because the usage of mobile devices is amazing,” he says.

He further explains, “If you look at groceries or ecommerce, 90 percent of transactions are happening on a mobile device. And, India is leading on the payments front. The level of innovation, what companies are doing on mobile, is far more sophisticated and advanced than Western countries. If you compare with the US, mobile transactions were 20 percent before COVID-19. People walk around with a lot of credit cards and have computers here and there. So, only some of the things they do on a mobile, not everything.”

AppsFlyer’s State of Finance App Marketing report found that between January 2019 and March 2021, India had the highest number (149 crore) of fintech app installs in the world. The distant second was Brazil with 60 crore installs, followed by Indonesia with 50 crore installs. The three developing economies constituted over 50 percent of global fintech app installs in the last two years.

The cream of Indian fintech CRED, Paytm, PhonePe, etc. makes up AppsFlyer’s India customer base. The platform also serves other marquee internet companies and unicorns such as Dream 11, Nykaa, Swiggy, BYJU’S, Bigbasket, ShareChat, Hotstar, Discovery+, Airtel, Voot, and so on.

“We found that in developing countries like India, the average lifetime value per device is comparable to the US, and it was mind-blowing,” Oren reveals.

AppsFlyer set up its India office in Bengaluru in 2015

AppsFlyer’s “mission” for India was clear when it set up its Bengaluru office in 2015.

AppsFlyer believes that it succeeds by helping customers succeed.

“It’s not only about the software, but also about the education around what you can do with a mobile app. We’d like to make sure that our partners can innovate for their customers. That’s enabling innovation,” he explains.

Oren shares that operating in a “sophisticated” mobile ecosystem like India’s has benefits too. “Because we learn a lot,” he says, adding, “And I think that’s the culture. There are a lot of similarities between Israeli and Indian cultures. They are very direct. If something doesn’t work, they tell you, hey, this doesn’t work. It’s the ability to go into details and provide good feedback.”

“If the customer is always complaining and finding something that doesn’t work, it’s amazing. It’s the best customer we can have,” states the founder.

AppsFlyer puts a premium on company culture. It is one of the non-negotiable things across its 20 offices in the world, which has helped it grow.

“We have only two values. And every decision we make as a company or any individual needs to satisfy these two values. One, is it good for our customers? And two, does it make you more proud to be a part of the company? The pride thing is critical because it also serves the first one. You cannot be proud of your creation if the product sucks, or if we are doing something that is not good for our customers. And this has really ignited many things that we do in the company, like giving back to communities.”

There is diversity of opinions, he adds, “because pride for you may be different from someone else from another country or background. Different offices are doing different things that they care about in their own communities”.

Part of AppsFlyer’s company values also involves “mastering change” and seeing it as an “opportunity hidden in a challenge”.

Oren elaborates, “Last year was very challenging for the entire mobile ecosystem for various reasons [including Apple’s privacy changes in iOS 14]. With rapid changes, we told our partners – look, there are opportunities. Now the question is, are you capable of identifying them and acting on them?”

“Look at companies that were extremely successful, but have now vanished. Blackberry, for example,” he says. “Companies that continue to walk in the same direction even though the market has significantly changed won’t exist.”

And mastering change is what AppsFlyer has been doing in the last 10 years, “but specifically, in the last year and a half,” according to its founder.

Interestingly, even though changing with the times has been its modus operandi, AppsFlyer also has a keen eye on things that won’t ever change.

Oren says, “The best prediction into the future is really identifying the things that are never going to change. And it’s always going to be customers. Then comes privacy and security. It’s never going to go away.”

Chandrayaan-2 detects presence of water molecules on the moon

OTT Platforms Appoint Body To Comply With New IT Rules 2021