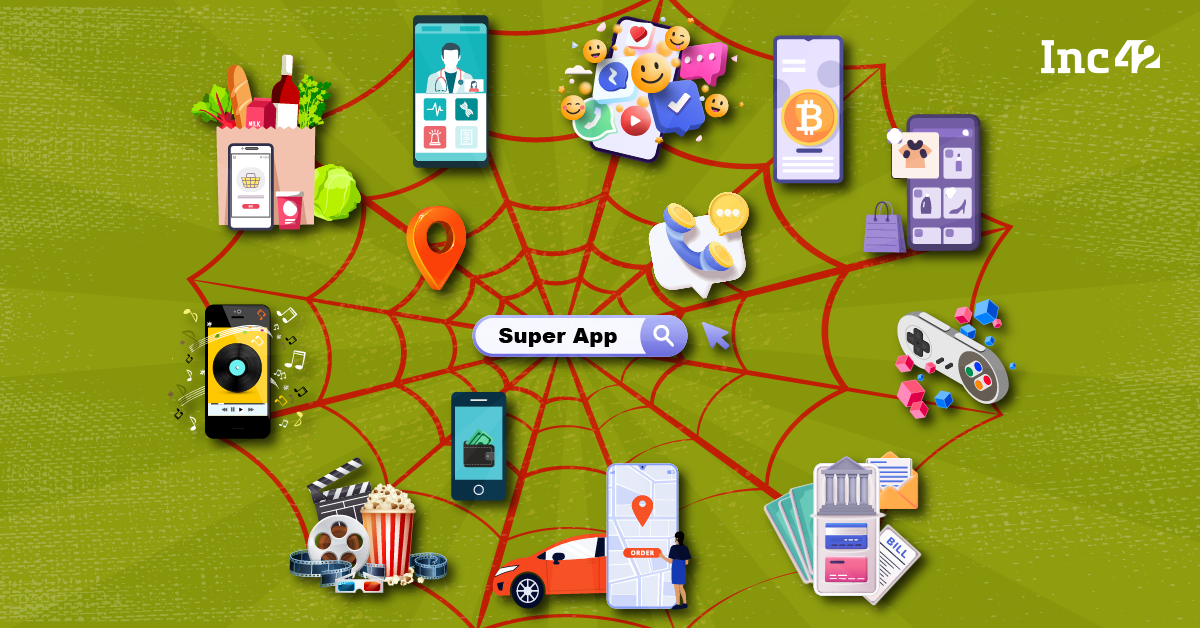 From Reliance to Tata, Paytm to Amazon, the super apps space in India is crowded by conglomerates and startups

However, problems such as price sensitivity, data privacy concerns and the impact of regulatory changes plague the rise of the ecosystem

The consumer internet ecosystem is at the centre of the Indian startup ecosystem. With an ever-increasing internet user base, more and more Indians are becoming dependent on smartphones for everyday tasks. This has led to the birth of ‘super apps’ in India which allow consumers to do everything from ordering groceries to paying bills online to booking flight tickets, all through a single app.

With the entry of conglomerates like Reliance (through Jio) and Tata Group in the sector, which already had presence of startups such as Paytm and Amazon, the super app space has become even more competitive in the country.

The industry giants are competing to make a mark in the vertical as well as the horizontal super app ecosystem by expanding and digitising their existing businesses. Inc42’s latest report, titled ‘The State Of Indian Consumer Internet Q3 2022, Infocus: Super Apps’, takes a look at the super app ecosystem in the country which has vertical players like Paytm, PhonePe, Amazon and horizontal players such as BYJU’s, Pharmeasy, and Swiggy. 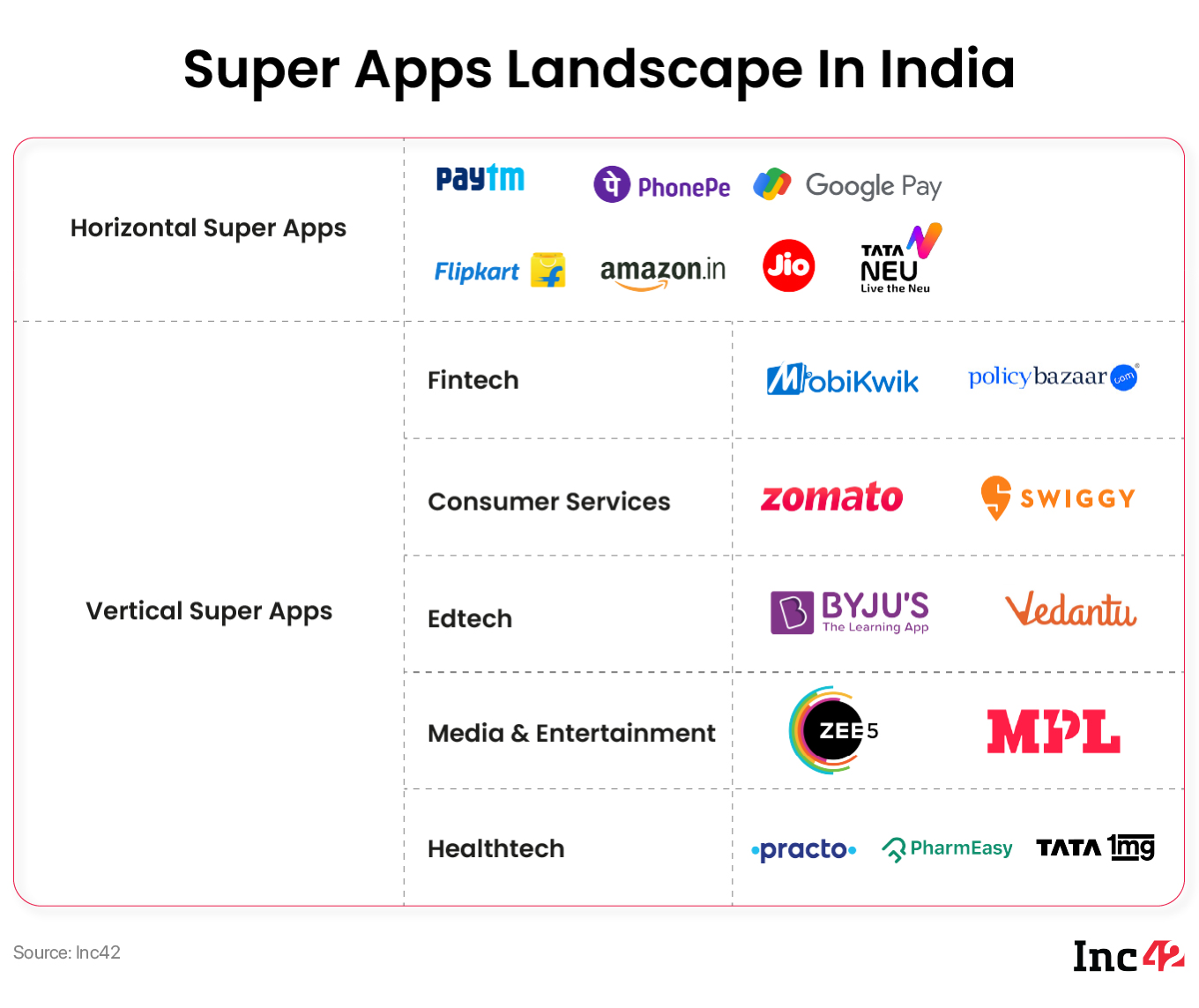 With consumer internet apps becoming a part of everyday life of many digital consumers in India, the ecosystem continues to be a lucrative area for tech platforms looking to build a one-stop solution. However, with scale (in India’s case, population and a large number of internet users), also comes a plethora of problems and challenges. Let’s take a look at the major hurdles for the super apps in India.

For Indian customers, having several ‘options’ and ‘choices’ is a must. There is little in the way of brand loyalty. A buyer may drop her favourite brands in favour of similar quality at a more affordable price point, and there is also an increasing trend of researching before buying.

“The super app market in the country is growing exponentially. Notably, India is a price-sensitive market and not brand-sensitive. So, to be sold, any new service needs to be hypercompetitive. This means that a startup needs to hyper-optimise its prices to sell multiple products under its roof,” banking super app Mewt’s cofounder Rishabh Jain said.

ProcessIT Global founder and CEO Arindam Mitra also believes that the growing number of Indian smartphone users opt for choice over brand loyalty. “The country already has established leaders for different product categories, and comparing prices across platforms and ensuring they get the best deal is in their (consumers’) DNA, which is a setback for super apps,” he said.

Focus On The ‘Walled Garden’ Strategy

All the super apps want the most significant slice of the market in the relatively nascent field. However, more often than not, these apps compromise on an essential aspect – customer experience.

“With a super app, any organisation can offer a multitude of services under its virtual umbrella. This situation can lead to the possibility of the organisation monopolising the market, giving rise to poor customer service in the absence of healthy competition,” Mitra added.

These apps restrict themselves to a ‘walled garden’ strategy; they don’t share their application programming interfaces (APIs) and software development kits (SDKs) with fellow super app players and discourage the adoption of a synergy strategy. It is counterproductive as it usually results in a sub-par version of the original concept, ending up in a poor customer experience.

Consumer internet startups having strength in certain products or service categories are increasingly partnering with the super app ecosystems of large conglomerates. For instance, the Tata Neu ecosystem is mainly built on the acquisitions done by the company’s retail arm Tata Digital.

This creates a quandary for startups building a standalone app with a ‘house of brands’ strategy. For instance, Tata’s existing B2C businesses such as education, fashion and lifestyle, wealth management, ecommerce, DTH, retail payments, grocery, electronics and consumer durables, among others, have been merged with the acquired new-age business ventures such as Grameen eStore, Urja, AccessBell, 1mg, BigBasket and CureFit. 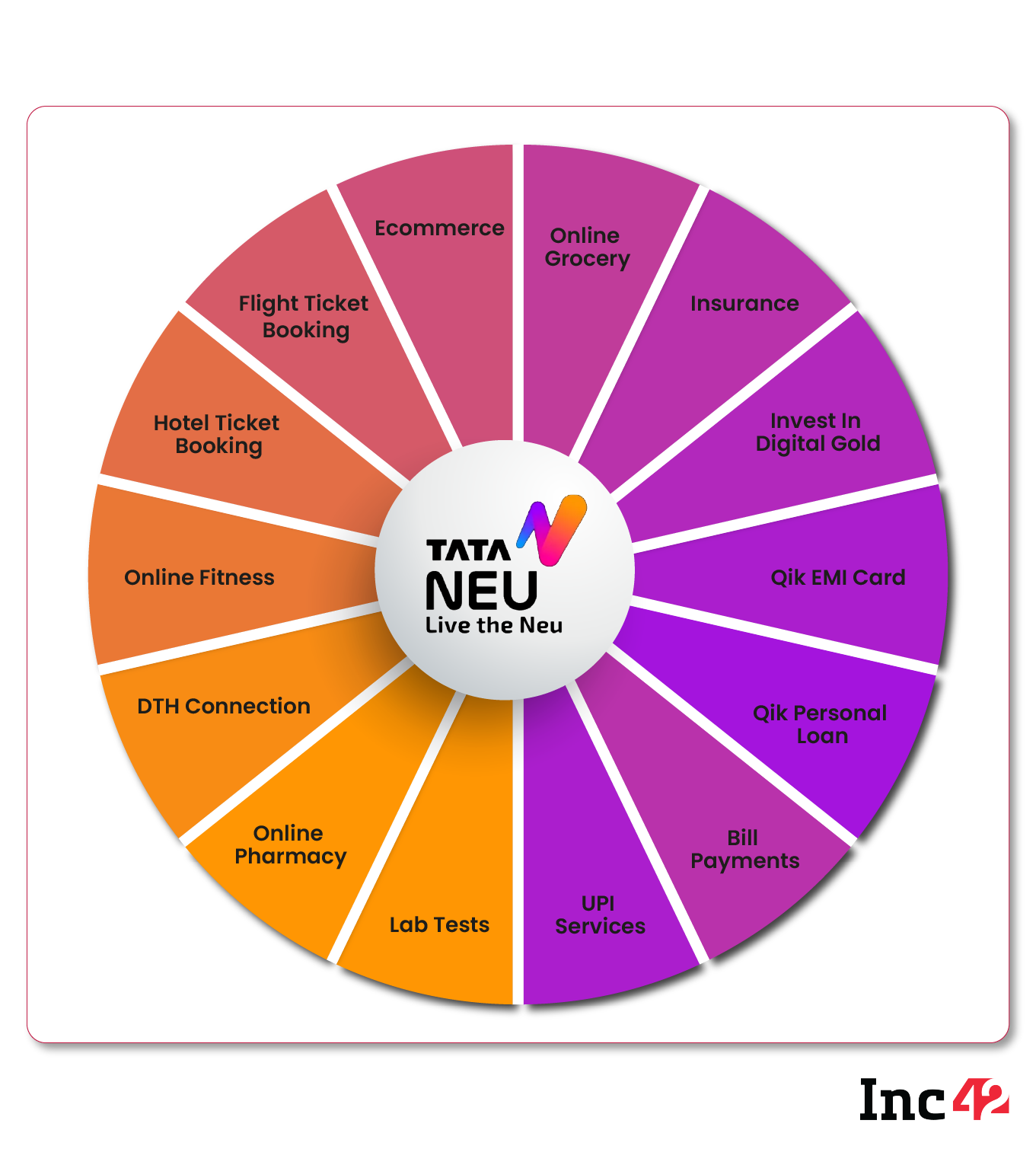 On the other hand, Paytm, despite having deep pockets and a large number of offerings, remains away from the ecommerce ecosystem.

The acquisition of startups by Indian conglomerates to scale the super app ecosystem hampers the growth story of growth and late stage startups in India, where the funding has dwindled by almost 63% in the first half of 2022, compared to the second half of 2021, as per Inc42 Consumer Internet Report.

The challenge of building core products versus following the TPA route and building partnerships to create a comprehensive super app ecosystem is a question that only the maturity of the ecosystem will answer.

Jain said that the conglomerates in the super app space will continue to acquire startups to strengthen their offerings, and this is a challenge that startups should be ready to face.

“This understanding should drive the startups to keep going back to the drawing board and better their core offerings to start growing and competing with these conglomerates that already have a lot of businesses under one roof and deep pockets to fill in anywhere they may be lacking,” he said.

“As the internet becomes a commercial marketplace, consumer data privacy is a serious concern for all the platforms. Since super apps collect customers’ personal information (both financial and social), they have increased risk and responsibility to secure this information,” Harish Kumar, managing director of Protiviti Member Firm for India, told Inc42.

Data protection is one of the most critical issues for a super app. These apps generate a lot more data than a single, standalone app. Therefore, this data’s protection, usage and management become all the more consequential.

The increase in internet penetration and the consequent rise in cybercrimes have made the situation more critical. A large amount of data that super apps collect and store can be misused and is a grave concern for them.

Kumar believes that most of the regulations currently in place by the regulators are an attempt to protect consumer privacy from data mining and privacy exploitation.

“It is imperative to mention here that the super apps do face regulatory bottlenecks. However, regulations should not be restrictive enough to hamper their growth in the digital consumer space,” Kumar said.

While the government has not been explicitly meddling with the affairs within the super app ecosystem, several regulations have a far-reaching impact on the segment. For instance, some of the recent RBI mandates, such as banning loading non-banking PPIs with credit lines, can impact fintech-related services on super apps. Since several apps offer ecommerce and fintech services hand-in-hand on their platforms, this can lead to regulatory problems.

The emergence of the Open Network for Digital Commerce (ONDC), the government’s digital commerce initiative, will also undoubtedly challenge the dominance of ecommerce majors in the country and impact the growth of Indian super apps. With ONDC, every internet platform will turn into an ecommerce marketplace and this will challenge the user acquisition for these super apps, experts said.

However, despite hosting several consumer-facing services, platforms such as Reliance’s Jio and ecommerce giants Amazon and Flipkart have rarely marketed themselves as super apps.

Besides, they have successfully attracted audiences only for specific categories such as ecommerce, entertainment, e-pharmacy and grocery delivery, among others. These super apps are not yet the ‘everything for everybody’ platforms – the unmistakable trademark of a successful super app.

In India, despite several startup consumer internet ‘unicorns’, an ‘everything for everybody’ platform is as mythical as a horned horse. Probably, only Tata Neu comes close to being such a platform. Yet, consumers aren’t exactly excited about Neu and prefer to use Tata’s standalone apps, defeating the super app’s purpose.

Tata Neu recorded 2.2 Mn downloads during its launch week and 11 Mn downloads in April and May 2022 across Apple App Store and Google Play Store, thanks to the IPL fever. However, it managed to clock just $120-150 Mn in gross sales in the first month. Neu missed out on the internal target of $200 Mn, and later the app downloads also fell to 2.1 Mn in June.

The pilot was successful among Tata employees, but when opened to the public, issues such as delayed responses, technical glitches and privacy concerns affected its stand in the ecosystem.

The super app ecosystem is uncharted territory for the Indian consumer internet startups and conglomerates and will pose many challenges for the players. However, with the increasing focus and competition in the space, it seems to be just a matter of time before at least one super app cracks the code for success.

Rural Marketing in the Post-COVID Era: A Lucrative Space