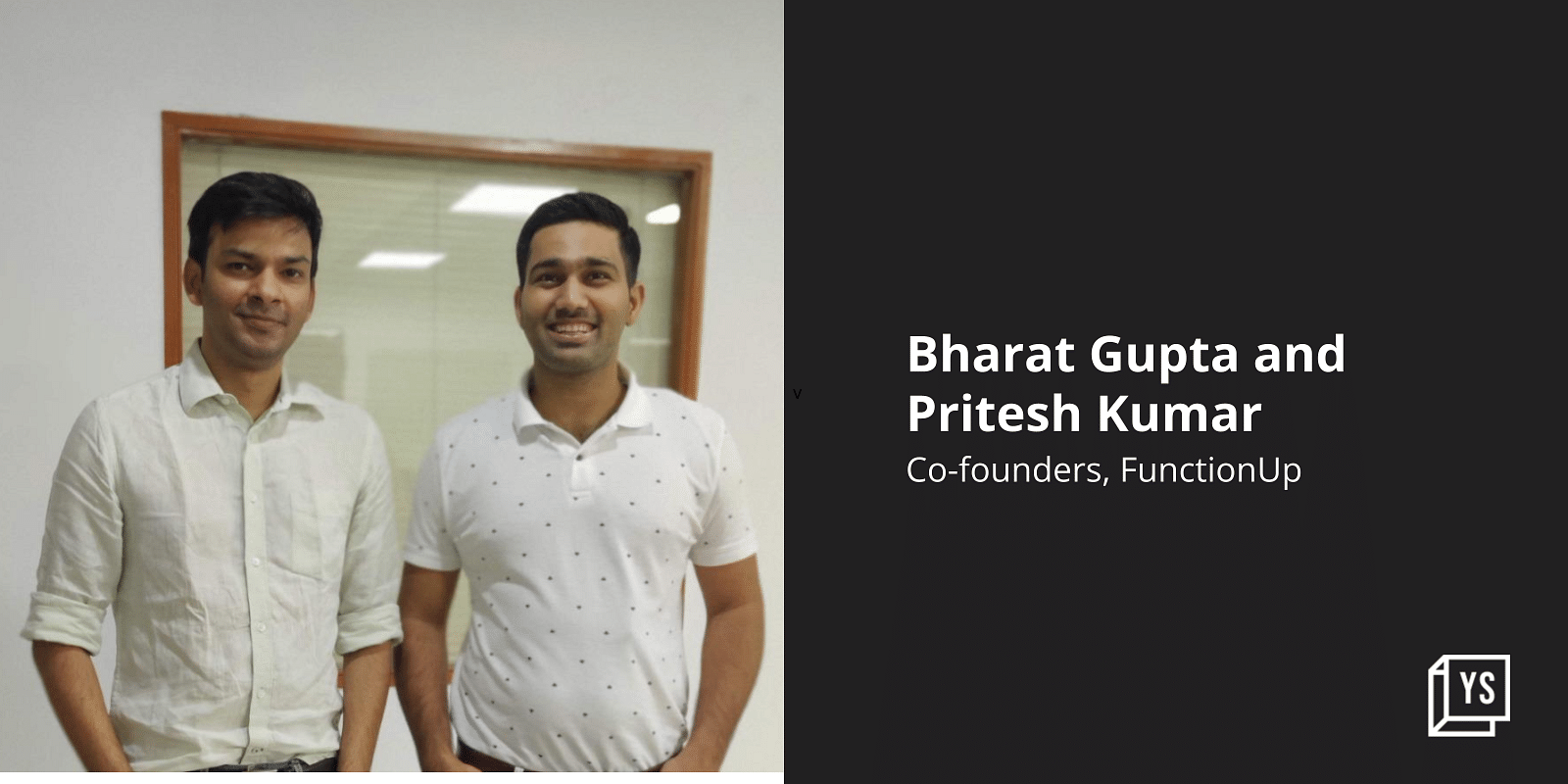 In 2021, serial entrepreneurs Bharat Gupta and Pritesh Kumar founded ﻿FunctionUp﻿ to bridge the gap between college education and the skills required for a job.

“The typical outcome of education is a job. Among edtech businesses, outcome-based courses have a high course completion rate and a high impact on students’ careers,” Bharat Gupta, Co-founder, FunctionUp, tells YS.

At present, FunctionUp has a team of 30 mentors from several of India’s NITs, IITs, ISBs, and IIMs, as well as over 4,000 students. In the last nine months, the startup witnessed a 150 percent monthly growth in the number of enrolled students.

Each month, FunctionUp receives between 35,000-40,000 applications, where it selects the top 2 percent (about 800-1000 students) in its cohort. The startup commences a new batch every six weeks.

Since its inception, FunctionUp has launched nine cohorts, and students from three cohorts have already graduated.

The startup specialises in backend engineering, coding, and programming languages, where each course takes up to four months to finish. Besides, students have to complete a total of nine hours dedicated to software development daily.

While it conducts some classes with larger groups, the mentors solve doubts one-on-one or in smaller groups on the FunctionUp platform.

FunctionUp has helped its graduates gain employment in startups, including Paytm, NoBroker, Justdial, Klub, Dr Reddys, Sunstone Eduversity, Medpiper, and Winuall, among others.

However, if these students fail to secure employment within three months of their course completion, they can join the next cohort to re-skill themselves, which can go up to a year until they find a job.

Farheena Ibrahim, a FunctionUp graduate, says, “The structure we were taught at FunctionUp while doing industry-grade projects, to my surprise, was the same structure used in their software development, which helped me immensely to concentrate at work.”

“We are closely connected to the industry. We know what skills are required in the industry and in an entry-level job. We are confident in our programme to say we do not charge upfront. We only charge fees after getting the students placed,” Bharat says.

According to Statista, by 2025, the Indian edtech industry is expected to reach $10.4 billion, while upskilling edtech startups will reach $0.73 million.

According to a blog by Keshav Bagri, VC at Bertelsmann India, in India, only 35 percent of students are placed at the end of an MBA programme.

“The pay after placement model has emerged as a viable alternative to tackle this quality conundrum and ensure that colleges focus on not just churning out graduates in bulk but to ensure that they provide them with viable jobs at the end,” the blog read.

Edtech startup FunctionUp operates a pay-after-placement business model and signs an Income-Share Agreement (ISA) with its students, where they pay 17 percent of their monthly salary to the startup for 36 months.

An ISA helps students avoid paying education fees at the beginning of the course by promising a certain percentage of their income for a fixed time to the institute once they get a stable job. Startups, including Sunstone Eduversity, Lamda, and LEAP School, are also leveraging ISA models in India.

“College graduates take about Rs 6-12 lakh in education loans to get graduate degrees. And after they complete their graduation, these colleges do not help them land a job. We wanted not to be a financial burden on anyone,” Bharat says.

FunctionUp has tied up with a few NBFCs—Eduvanz, Liquiloans, and PropellD—which help the startup track its payments—a smaller version of how banks monitor education loan repayments.

It has capped this amount at Rs 3.5 lakh, and once reached, the startup stops taking more payments. Moreover, FunctionUp does not charge candidates who are not placed.

FunctionUp has partnered with the National Skills Development Council (NSDC) and is looking to be a part of similar government initiatives.

“We have a niche in jobs related to advanced level skill, and hence, we started with backend engineering upskilling and training through practical approach — through boot camps and cohorts. We are also expanding into multiple domains and bringing in the cohort or live experience to students,” Bharat says.

He adds, “This is directly proportional to our internal expansion in the form of mentors, operations, and servicing teams.”

What Are The Best Strategies for New Forex Traders?

9 Ways to Protect Your Business Reputation

From Elbit Systems to Burger King, New Offices Are Opened Nationally: 10 Tips for How You Can Successfully Do It

The future of voice AI in healthcare

Third Wave Coffee Raises $6 Mn To Expand Across The Country