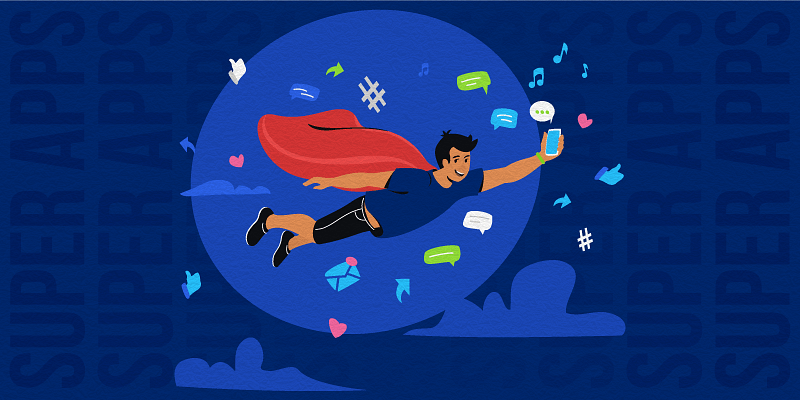 Though the term ‘Super App’ was first coined by BlackBerry founder Mike Lazaridis back in 2010, the first Super Apps to emerge were not from developed economies like the USA, Europe, the UK, etc.

A quick review of the super apps shows that the country of origin of most of these super apps are developing or under-developed nations (with the exceptions of developed countries such as the USA – Amazon, Singapore – Grab, Japan – LINE, South Korea – Talk, and Dubai – Careem).

Most countries (except China), have either one or at the most two prominent platforms for super apps. India, on the hand, has many formidable super apps in the making as illustrated above.

With increasing levels of digitisation, greater affordability of smartphones, and a COVID induced preference for digital, super apps are finding greater acceptance for their utility.

The value of a super app lies in its simplicity and convenience of many-in-one. It is important to have a core offering within the platform that is high-frequency and engages customers with the least amount of friction.

Most of the successful super apps globally have centered around either of the following six core service offerings:

It is worth noting that global players such as Amazon, Google, and WhatsApp have tweaked their offerings and are offering new services in India (not offered in most other parts of the world):

A brief look at India-origin super apps in the making:

As laid out earlier, some of the notable super apps in the making in India are the following:

The latest entrant in the super app space is the Tata Group. Under the leadership of N Chandrasekaran, Chairman, Tata Group, the company is executing ‘One Tata’ strategy around the pillars of 3S (simplification, synergy, and scale). The super app initiative of Tata is the perfect culmination of this strategy, and also opens up the next frontier of growth to capture the growing digital opportunity for Tata’s businesses.

Tata’s super app will bring various consumer businesses of the Tata Group under one digital umbrella, and at the same time offer seamless omni-channel experience. It has also planned strategic acquisitions to further bolster digital presence (eg., Bigbasket and 1mg).

The illustrative table below lays out the range of services that the Super Apps offer (or plan to offer):

As these platforms evolve and mature over the next three to five years, and are adapted on scale by the mobile first consumers of India, there would be many valuable lessons that will be learnt and imparted to counter-parts globally.

Wallet Interoperability To Be Enabled Via UPI: RBI Master Directions

How corporate India is driving COVID-19 vaccination in India