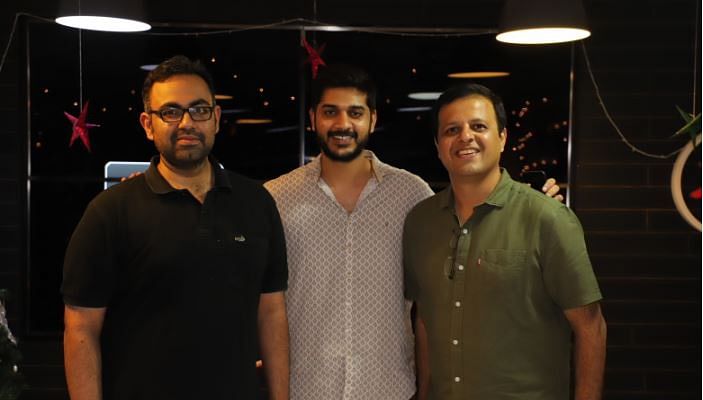 Founded in June 2019 by Prateek Shukla, Nrupul Dev and Yogesh Bhat, Masai School is open to anybody seeking training in coding.

In August 2020, Masai had raised $2.5 million in a pre-series A funding. The startup claims to have trained 100+ students across four batches, with more than 50 percent of students from non-computer science and non-metro backgrounds. Currently, there are close to 500 students that are studying at Masai. By the end of this year, the team is gunning for over 2000 students.

The school has been a turning point for many youngsters. Case in point is 24-year-old Ashish Raj, who worked as an Uber driver from 9 pm to 4 am, and still managed to get to his college at 9 am to pursue his diploma in engineering.

Hailing from small town Munger in Bihar, Ashish had moved to Bhopal to pursue his Diploma in Electrical Engineering. Having been introduced to computers when he was younger, thanks to his uncle’s cyber cafe, Ashish was interested in programming and computers.

But getting job ready meant learning more skills, and that is how he was introduced to Masai School. Today, Ashish works as an implementation engineer at WebEngage.

“With this fund raise, we want to establish ourselves as a complete online skills and careers school for young graduates. We aim to expand our offerings to UX, data analytics, product management, everything in short towards creating job ready individuals. The idea is to build great student outcomes. Masai will be the biggest college alternative of India,” says Prateek Shukla, in a conversation with YS.

The duration of the main course is 20 weeks, and it is designed to train learners and get them skilled and job ready. After completion of the programme, the hiring partners of the coding school spend a week with the students to closely assess and shortlist candidates they would want to hire.

The startup works on an Income Share Agreement (ISA). Instead of charging a fee, Masai School signs an agreement with students, where once the student finishes their course, they need to pay Rs 3 lakh after they get a job (whenever that is) with an annual salary of at least Rs 6 lakh. The amount is to be paid back in instalments: 15 percent of the monthly income for three years (until they pay Rs 3 lakh).

The pandemic push and shift

Like most edtech startups, the pandemic acted as a strong tailwind for Masai School. A report by RedSeer and Omidyar Network India says the coronavirus pandemic has proved to be one of the biggest game-changers for India’s edtech sector. Online education offerings for Classes 1 to 12 are projected to increase 6.3 times by 2022, creating a $1.7 billion market.

While Masai was always online and remote first, they nevertheless did provide office space to students who lacked the resources to study in an undistracted manner.

“Close to 60 to 70 percent of our students are from economically weaker sections and non-computer science backgrounds. The entire divide is overwhelming and can be demanding. Three batches had graduated before the pandemic, and all three had 90 percent placement. But the pandemic pushed even more students who lacked resources to go online,” explains Prateek.

Many faced infrastructural challenges which they had not encountered before, as they would use the office infrastructure. Next, the campuses had the option of peer learning informally. “This needed to be replicated online,” adds Prateek.

Also, the team had realised that most of their clients now are looking for a different skill set, for those working online only.

“What worked was introducing ‘Glide’, an allowance programme. This gave living allowances to top performers who came from challenging backgrounds. We provide them Rs 15,000 a month for seven months, so that they can invest in a laptop, study desk, and proper internet connection. Some chose to use the money to shift from villages to nearby cities,” says Prateek.

Some of the courses the team provides, like the Android course, cannot be done without a good laptop or smartphone. Prateek says they also brought in a change in the teaching methodology. From live interactive classes to ‘I do, we do and you do’ classes, these are workshops that are objective driven. In this methodology, the instructor demonstrates a concept, then works with the students to build the code or programme together, after which, finally, the student does the coding and programming on their own.

“This concept has worked extremely well with the students. We also worked with ‘Atal’, a company that focusses on English learning. We formed a course to enhance soft skills over a period of 30 days, as that had become a big ask for companies,” says Prateek. The focus is how to over communicate when you are working in a remote environment.

“Peer programming, a methodology used in the US in the 80s and 90s, was also adopted. Here, the focus is on collaborative learning, where a peer guides and navigates you,” says Prateek.

Masai was thus able to solve for this, and the batch that started in April and graduated in November 2020, saw close to a 100 percent placement. The average salary is Rs 7 lakh per annum.

Coming from an understanding of the market

Prateek, however, is not new to entrepreneurship or even teaching for that matter. When he was in the third year of engineering at IIT-Kanpur, he had interned for Teach for India. And later, when he started Grabhouse, the online rental startup, he had sponsored the education of the children of his housekeeping staff.

After Grabhouse’s acquisition by Quikr in 2016, Prateek worked for a real-estate company before taking a break and travelling to Tanzania. While there, the need to solve for education became stronger in his mind.

He says, having been employed, the founders understand the capability needed to get an entry-level software job. Whatever Masai is adding or doing today is basis the three founders’ core understanding of being job ready in an evolving job market.

While they have found the path and solution for solving skill gaps, they now want to focus on scale.

Speaking of their current investment in Masai, Siddharth Nautiyal, Partner Omidyar Network India, says, “We are an investment firm focussed on social impact, and our aim is to back good entrepreneurs that are tackling India’s toughest problems. And there are few areas that have as large an impact as education.”

He explains, with the 1.5 million engineers that graduate in India every year, close to 80 percent aren’t employable and don’t have the right skills.

“There is a growing demand for high skilled engineers at least for a decade. So it is important that the demand gets met. Historically people have spent a lot of money into training sessions and sectors. This isn’t scalable, and also limits opportunities for meritorious students who may not have the right access. This is what makes Masai really exciting. The only thing the startup asks is complete dedication on part of the student. They design curriculum that makes the students completely job ready.”

The focus on skilling and making students job ready is fast growing. There are startups like San-Francisco-based Lambda School, and Delhi-based Pesto Tech, that recently onboarded Swiggy’s co-founder Rahul Jaimini. Startups like Great Learning, UpGrad, MountBlu Technologies, AttainU, and School of Accelerated Learning are also other players in the sector.

Prateek explains, “The edtech sector isn’t a winner takes all market. If you just look at the colleges that we have, there are over 10,000, and they make average revenues to the tune of Rs 20 crore. The pandemic has just brought to the fore the urgent need for skilling. And many believe that job tech focussed platforms like us will be an alternative to universities. The pandemic has made online learning and education mainstream.”

Thus despite the competition and multiple players in the space, Prateek believes the edtech sector has a lot to offer. With online education just becoming mainstream, startups have all the grounds to explore existing pedagogy and come up with new offerings.