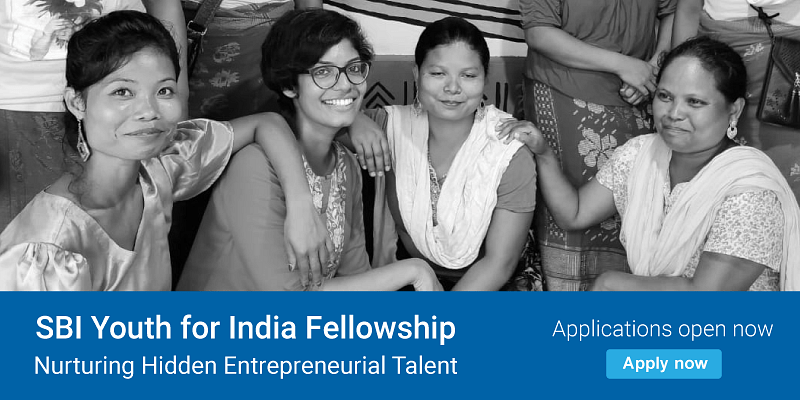 The women of Meghalaya’s Dehalbagan village aren’t strangers to hard work. Belonging to a matrilineal society, they might enjoy privileges like inheriting family property, but it is mostly managed by men. As a result, they are often left with limited bargaining power and financial independence. Until two years ago, their only options of livelihood were doing odd jobs, working in factories or collecting betel leaves and wild vegetables.

Cue to the present. Many of the women are the face of the eco-friendly brand ‘GoGaro’ — launched by a network of six women, namely the ‘Nangrima SHG’ that make utensils made from locally sourced areca leaves and bring home a stable income. Additionally, over 5 more SHGs provided support in terms of raw materials as well.

Their success story started with a woman who set out to make a difference after realising that she didn’t want to follow up her B.Tech degree with a corporate job. Meet Varsha V., a recipient of the SBI Youth for India Fellowship 2018-19 batch, who helped the Garo women of Dehalbagan form SHGs, get the required institutional support and launch the ‘GoGaro’ brand.

It was a 13-month journey for Varsha, who found out about the SBI YFI Fellowship while looking for opportunities to drive impact at the grassroot level. The SBI Foundation’s SBI Youth for India Fellowship is a unique programme that supports initiatives to make a difference in rural environments by collaborating with renowned NGOs.

As luck would have it, the 29-year-old found the right opportunity as a notification on her phone. “It was one of those random notifications on my email that introduced me to the fellowship,” Varsha recalls. “I applied for it after getting to know how it supports initiatives working to promote rural livelihoods.”

Starting in August 2018, she was assigned to work with an NGO Rashtriya Gramin Vikas Nidhi (RGVN) in Meghalaya. However, when Varsha reached the village, she saw that despite the popularity of SHGs across the country, the government initiative was yet to make inroads in Dehalbagan.

“While the government had talked about SHGs in the past, not many women had come forward. So, the first challenge was to mobilise more women,” says Varsha. She travelled to 10 villages and assessed how receptive the women were to the idea of entrepreneurship, while taking the help of RGVN officials like Deputy Director Aneeta Dutta, who provided support throughout the fellowship. Apart from this, Varsha adds “Ronald Kynta COO, and Erlina lyngdoh, BPM (Block project manager), MSRLS, gave me the much needed insight and support for the project, it would not have been possible without them.”

Varsha learned that the women of Dehalbagan were enthused by the idea, and her team started the groundwork to assess their skills and discuss business ideas.

The women finally settled on making tableware out of areca leaves as it was easily found in the region. They had years of experience of working in areca plantations. Nearly 60 women came forward for the initiative, and they were divided into six SHGs. The project was jointly funded by government agencies, the NGO, community investment and a cash credit loan.

The next step was to get the women the required training. So, Varsha accompanied six of the women to a tableware manufacturing plant in Barpeta, Assam where they could learn the craft. However, she noticed their reticence when it came to asking questions, which only indicated their lack of confidence in themselves.

“The women had kids and families, and it wasn’t easy to leave them, even if it’s for a few days. But, we managed to gather a few,” says Varsha. After the group returned to Dehalbagan, they started collecting areca leaves.

During this phase, Varsha observed how persistent the women are. “Even before leaving for Barpeta, the women had collected leaves and stored them, but a large part of the stock was damaged due to the seasonal rain while they were away. However, they didn’t let that discourage them, and started from scratch,” she adds. Over time, people from other villages also came forward to sell the areca leaves they’d collected to the SHGs of Dehalbagan and their stock only grew.

While the women were now skilled at their job, there was still the issue of arranging machines that could produce the leaf plates at an economically viable pace. “We took a soft loan and got the required infrastructural support from NREGA (National Rural Employment Guarantee Act 2005) block office, to set up a small manufacturing facility and start production,” Varsha recounts. The facility comprised two storage sheds, one machine room and a water tank.

Still, the road was only getting more challenging. When the SHGs started production in September 2019, they were in for a rude shock on Day 1. “The electricity supply in Dehalbagan was very erratic. When the machines were switched on the first time, a lot of homes complained about blown fuses of television sets because of low voltage. They started blaming the women associated with the SHGs for all the trouble. Consequently, many of the members felt their confidence slip,” says Varsha.

The lack of motivation was a consistent problem for the Garo women of Dehalbagan, as many of them had never had the freedom to manage their own money. “Most of the women had side jobs they had been doing for years,” Varsha says. “So running this facility was something they did on their own time. This meant they were away from their homes for longer periods of time.”

During this period, the women felt the pressure as their families’ expectations rose. “There were many times when the women would be demotivated whenever things got stuck,” Varsha says.

While the challenges didn’t completely go away, the SHGs were able to get some relief after a transformer was installed in the village. They had to run from pillar to post, and take the matter to several politicians and government officials to get the job done.

Rather than sitting and letting the women suffer silently, Varsha chose to build their confidence. She invited the local leaders and authorities to visit the manufacturing facility, which boosted the confidence of not just the SHG members, but other villagers too. The SHGs also collaborated with a Guwahati-based artists collective ‘East India Poets’ for a campaign called ‘Paint A Village’. During the campaign, the artists painted the manufacturing facility in eclectic colours to represent the undying spirit of the Garo women of Meghalaya.

The SHGs made their first sale to Meghalaya State Rural Livelihoods Society during a state fair. And since then, there has been no looking back. GoGaro products are now sold at various stores in cities like Guwahati and Shillong, and the SHGs have partnered with other SBI YFI Fellows to market GoGaro products.

Looking back at her experience, Varsha says that the SBI YFI Fellowship was an eye-opener. “We all have preconceived notions about the lifestyles of the disadvantaged. After spending more than a year with the women in Meghalaya, I got to learn about how dextrous and hard working they are. I would have never gotten a chance to meet such strong-willed women otherwise,” she adds.

Even today, GoGaro is continuing with support from our fellows. Charan Krishna Nichenametla from the (Batch 2019-20) took the brand one step ahead, and current batch fellow Nupur Ramchandani is carrying the legacy forward.

You can directly apply for the SBI Youth for India Fellowship by clicking on Apply Now. It’s a simple ten-minute process, which can be done on your phone!

The last date to submit your applications is April 30, 2021.