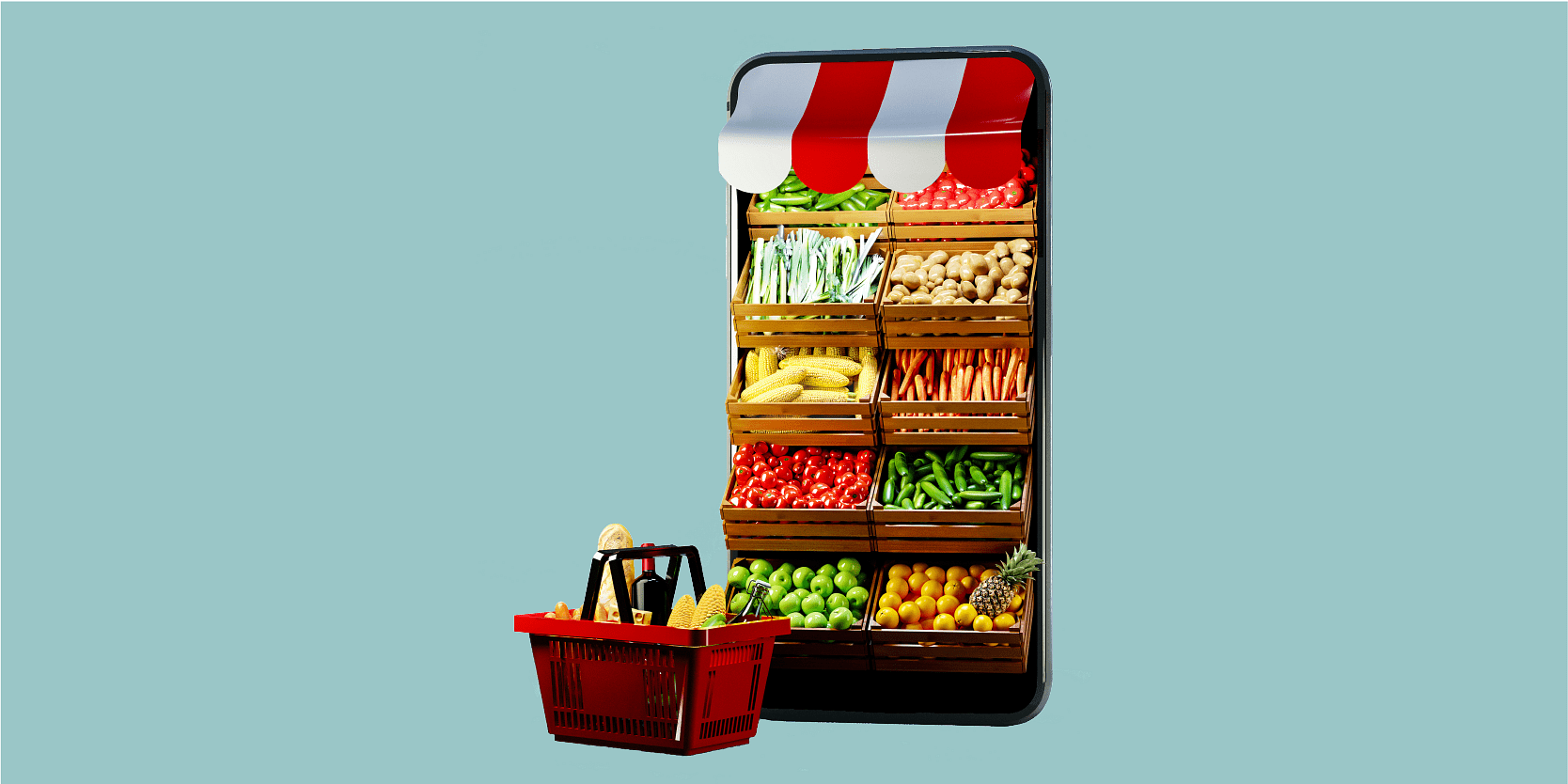 Pre-COVID India was sold on online shopping. E-grocery, not so much. But the pandemic changed all that.

According to data provided by homegrown consulting firm RedSeer, the online grocery market has seen a massive 75 percent growth in the past 1.5 years, with a gross merchandise value (GMV) of $3.3 billion.

Rohan Agarwal, Director, RedSeer, says that the market is set to touch a whopping $18.2 billion by 2024.

It’s clear that the pandemic has removed any doubt investors, mentors, or entrepreneurs had in the e-grocery and online hyperlocal segment. The recent Tata Digital acquisition of e-grocery unicorn BigBasket has kept the spotlight trained on a market that has seen phenomenal growth by other startups like Swiggy, Dunzo, Amazon, and Grofers.

DealShare is said to have raised $100 million from Tiger Global while ﻿Dunzo﻿ raised $40 million funding led by Google, Lightbox, and other investors. Swiggy racked up a whopping $800 million.

These deals show that the segment has heated up – a big shift from barely a couple of years ago when investors were extremely wary of the hyperlocal segment.

In 2016, the segment was hit significantly; the reasons cited then were lower margins and penetration.

Startups like ﻿Peppertap﻿, the third-largest online grocery delivery platform in India, shut shop. The reasons were an inability to keep up with the rapid expansion of operations; the second was the high cost of customer acquisition accrued through numerous discounts; and the third – the most fatal – was the amount of cash burned on logistics and operations.

A few years down the line, consumer acquisition costs have dropped and ops have become relatively easier with more players and delivery partners.

The shifts in the segment

Rohan says the reason grocery as a segment is smaller is because the offline kirana network is strong, and habit formation in a grocery setup is harder, especially in Tier II and III cities where the relationship between the customer and the local grocer is deep.

“The pandemic has seen a stronger adoption in Tier II and III cities,” adds Hari Menon, Co-founder and CEO, BigBasket.

Getting people to turn to e-grocers was a big challenge for startups in the segment. Grofers, which launched operations in Tier II and III cities in 2016, had to shut operations in several cities.

Cut to today, and the story is completely different.

“Grocery has the biggest consumption in terms of basket perspective, but penetration is still lower. The online market is close to one percent, while categories like fashion, electronics etc are higher and range anywhere between 6 and 30 percent,” Rohan says.

The RedSeer report explains that online e-grocery contributes to a small 0.3 percent of the whopping $603 billion food and beverages market in India in 2020. This in itself was an enormous 73 percent increase from 2019.

Another shift the market has seen is deeper segmentation.

Companies like BigBasket and ﻿Grofers﻿ fall under the full-stock, start-of-the-month buying purchases like staples, and commodities, that have longer shelf-life products. These conveniently deliver monthly essentials to your doorstep.

Others like MilkBasket and BB Daily deliver daily need items on a subscription model at your doorstep. And then there are on-demand and hyperlocal models that focus on consumer demand.

Anup Jain, Managing Partner, Orios Venture Partners, says there is no doubt that consumers in urban centres have had greater use for these services during the pandemic due to restrictions on mobility.

“Service at doorstep is the new norm for all essentials. However, while penetration may go up, the usage is likely to be skewed in favour of daily groceries rather than other goods. Specialists will come in the areas of B2B consignments as special packaging and portability is necessary. Hyperlocal delivery players are not geared up for heavier and more sensitive deliveries,” he says.

Clear segmentation of the market

BigBasket operates across more than 25 cities and has one of the largest assortments – more than 50,000 stock keeping units (SKUs). The Bengaluru-based startup has also tied up with about 12,000 farmers and delivers products directly from them.

Hari Menon, Co-founder and CEO, BigBasket, says, “On annualised revenue and not on a run rate basis we have made $1.1 billion in March 2021, and will soon touch $1.5 billion. This pegs us as the fourth largest grocer in the country.”

Grofers, on the other hand, logged $1 billion in GMV (total value of merchandise sold over a period) in FY20, and is on track to double it every year.

Ecommerce giant Amazon also wasn’t far behind. It launched Pantry and Fresh, which focused on essential delivery. The two integrated earlier this year, and allow customers to opt for a two-hour delivery window, or choose a convenient two-hour slot from six in the morning until midnight.

During this time, startups like Dunzo, which were already following the deliver-anything model, saw explosive growth. The startup saw 11X growth in gross realisation, including delivery fees, commission from merchants, and revenue from the ancillary business.

Kabeer Biswas, Co-founder and CEO, Dunzo, says the company had not lost money on an order basis, and gross margins were positive. He adds that it had reached breakeven on an EBITDA basis in Bengaluru, and the B2B vertical had grown 2x.

Dunzo also reached gross margin profitability and reduced its EBIDTA loss by 68 percent year on year. Prior to the COVID-19 pandemic, in January, Dunzo had onboarded 600 merchants. By September, the number touched 15,000 across cities, with its merchants seeing a 150 percent increase in revenue during the lockdown. The delivery startup now has an average delivery time of 20 to 25 minutes.

Startups like Swiggy that were primarily focused on online food delivery also quickly pivoted to scale their existing Genie services, which followed a Dunzo-like hyperlocal model.

Genie, which started operations in 2018, is now available in 65 cities. The foodtech unicorn soon expanded and added ‘Instamart’ as a vertical – this follows a hub-and-spoke model of warehouses that stocked essentials and are delivered to the consumers. It is now present in two cities.

The pandemic and lockdowns led to a drop in food delivery orders in March 2020, but the additional businesses of Genie, and Grocery (now Instamart) got in 100 million orders till October 2020. On average, Swiggy, does about 1.45 million orders in a day.

The competition doesn’t mean BigBasket is restricting itself to a pure full-stack model.

Hari says, “We already have an understanding of the market, the partnerships, penetration, and SKUs. We have also significantly increased BB Daily’s range. It will now be expanding into hyperlocal, on-demand delivery. This is already in the works.”

Stock up to ensure fill rate

The launch of micro-fulfilment centres and ‘Instamart’ is a clear step towards further segmentation. “These players have transitioned to an inventory model. They were essentially cataloguing products of kiranas; now they have transitioned to a dark store model. It was a journey even full-stack models like Grofers took,” Rohan says.

Anup explains that it comes down to deep pockets, adding that grocery has to be done at scale to be profitable as margins are thin. “That is the biggest sustainable use case for hyperlocal delivery. Everything else is infrequent, and there are dedicated players like Pharmeasy in medicine delivery or Zomato for food delivery,” he says.

One of the essential aspects for any grocery model to survive is the fill rate. If a consumer wants 10 items, how many items were delivered becomes the key. “For a kirana, inventory management is virtually non-existent. So when a customer places an order, there is no guarantee they will be able to get the delivery, and this gives them a poor experience,” Rohan says.

A model like a micro-fulfilment centre or Instamart ensures that the consumer experience is consistent. Other than that, there are also larger margin profiles. This depends on category contribution, but gross margins of inventory are anywhere between 17 and 20 percent. Margins in kiranas are wafer-thin.

Kabeer says Dunzo used its larger supply chain and provider tie-ups to ensure that stores also received supply, which helped their consumer base. “Most employees had gone back to their hometowns or villages, meaning stores did not have the bandwidth to cater to standalone walk-ins let alone the surge in demand. That is when we stepped in as logistics partners.”

He explains that a large scale is critical to reach gross margin profitability. Citing an example, Kabeer says if your scale is Rs 100, you possibly lose Rs 10 every month. When the scale gets to Rs 200, you lose 0, and at Rs 300 it goes to -Rs 5 per month, and “the numbers keep going up in your favour”.

Anup lists another added advantage: Swiggy has a large base of satisfied users who have come to trust its credentials in food delivery. And Dunzo, he adds, is widely regarded as a general hyperlocal delivery player that fills the gap between appointment-led and minimum basket size-led deliveries from larger grocery platforms.

The market today needs to focus on ensuring optimal inventory structure at all times. This is vital as slow-moving inventory eats into the working capital.

“Opening dark stores and operating is a capex and effort-intensive affair. Not only are you running last-mile delivery, you are managing mini warehouses and supply to the mini warehouses,” Rohan says.

He adds that hyperlocal model markets must be selected carefully as there are multiple catchment areas, but select ones have customers open to using such services.

Demand is unpredictable, especially amid the pandemic situation. Certain platforms may have invested heavily at the start of the pandemic; others may not be able to do so in the future. This means models need to be more resilient.

“Kiranas as a fulfilment model have been resilient. You are bound to find regular items; you may not get the brand, but 80 percent of the basket at the peak of the pandemic was fulfilled by kirana inventory,” Rohan says.

Anup feels hyperlocal delivery will continue to see greater adoption and frequent usage for emergency grocery delivery by urban households. There will also be a rise in specialists who handle B2B goods delivery in micro packages, important documents for to and fro delivery like physical sign off, refrigerated players for temperature-sensitive gourmet food and meats.

One thing is clear: India’s e-grocery market is split wide open. It will be interesting to see how the many players, big and small, tap this massive opportunity.

[Tech50] Building stealth technology for the Ministry of Defence, how this startup is ensuring our soldiers and warfare go undetected