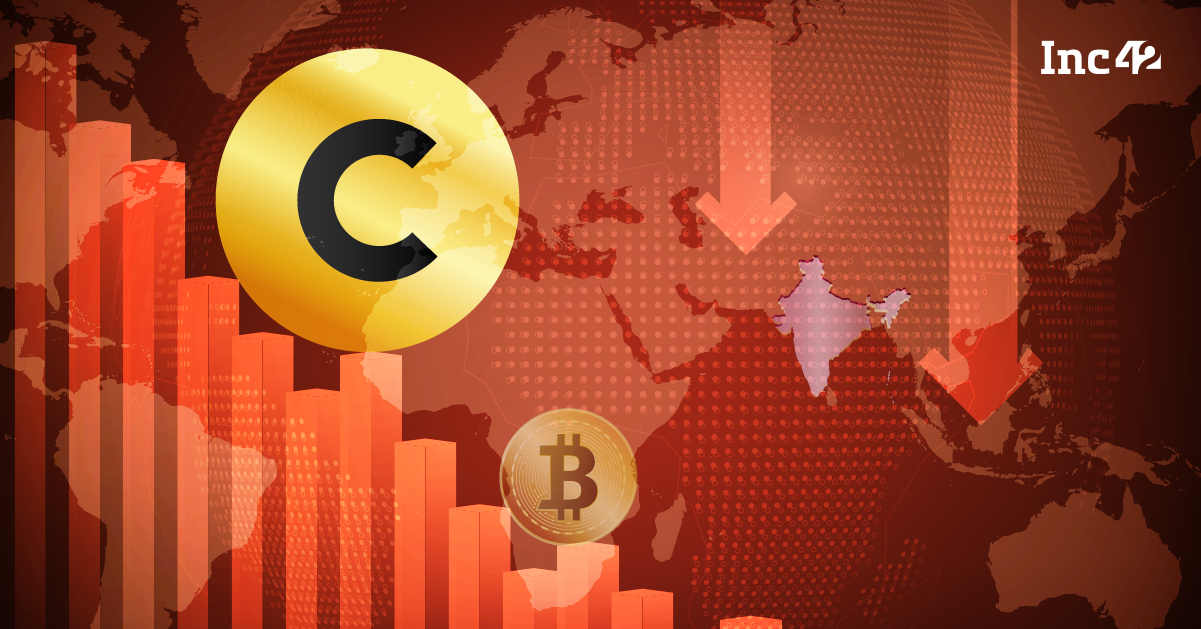 The crypto exchange once peaked to reach $400+, but it is currently trading at $54 on NASDAQ

The company suspended its hiring plans for India, delayed its relaunch in the country and took its foot off the investment pedal

After the $90 Bn free fall of Coinbase, no crypto company will dare to go for an IPO in nearby future, believe experts

“Coinbase’s direct listing is a watershed moment for the crypto industry,” he said.

Backed by the VC firm Andreessen Horowitz, which holds about 25% of Class A and 14% of Class B shares in the company, Coinbase has been an inspiration for crypto entities across the globe.

Goldman Sachs has downgraded the company from ‘neutral’ to ‘sell’ and lowered its price target to $45 from $70. “This is serious. And this is not just due to the crypto winter,” a former Coinbase employee told Inc42 on the condition of anonymity. “Look at Coinbase’s business operations in the past two quarters. The total trading volume is down from $547 Bn in Q4 2021 to $309 Bn in Q1 2022, a staggering decline of 44%. Retail trading is also down by more than 50%. Compared to this slump (fall in percentage) FTX and Binance have performed better,” the employee added.

According to him, when crypto prices fall, trading volumes across exchanges tend to rise significantly. But Coinbase has failed to leverage that in recent quarters.

The 10x decline of the NASDAQ-listed crypto exchange has raised many questions in India and across the world. Here are the most crucial ones:

How The Coinbase Saga Affected India

In April 2022, Coinbase had 300 employees in India and announced plans to hire 1,000 more by the end of the year. As for its India plans, Coinbase founder and CEO Brian Armstrong said,

“We want to build a local team and create a lot of jobs here. But more importantly, [we want to] help bring this technology for its benefit in a safe and trusted way. I hope that people [would] see our intentions are good and that we have come with humility and respect.”

Things did not go according to plans, though. Right after its grand launch event in India, Coinbase had to halt UPI payments as the National Payments Corporation of India (NPCI) issued a clarification. The company soon suspended its key features including ‘buy’ for Indian users. The company has now decided to delay the ‘real’ launch in India for some time, said the former employee.

The company also pruned its India team by more than 10%. According to reports, Coinbase India head Pankaj Gupta has relocated to the US office.

According to the former employee quoted earlier, the company not only suspended its India recruitment plans but also slowed down its investments to be accelerated earlier.

“Most Indian companies follow what Coinbase does. For instance, last year, it was the largest recruiter for the crypto segment in India. But after it paused its India game plan, Indian crypto companies also suspended hiring citing the crypto winter ahead,” said the former Coinbase employee.

It is worth noting that Binance continues to hire despite the global crypto downturn. “There will be an impact on the Indian crypto ecosystem in terms of seed stage investments. But it may not be significant as Coinbase investments are not necessarily like lead investments. However, it always helped those companies. The ticket sizes were usually small, from $100K to $1 Mn,” said Siddharth Sogani, founder and CEO of crypto analytics firm CREBACO.

According to Sogani, Coinbase could have opted for an ICO last year and still could have been valued at $100 Bn. But the company wanted to raise funds from institutional investors and went for an IPO. However, after public listing, one needs to operate in a structured manner, which is also its value proposition. A listing creates a certain amount of trust required by crypto companies.

On the other hand, it seems people are still not ready to invest in crypto firms, given the company’s free fall in the market. Further, the US SEC did not allow Coinbase to launch multiple products on which it had worked for months. In this scenario, crypto companies are not likely to go for IPOs, at least for a year.

Prasanna Lohar, VP (technology) at DCB Bank, raised another point. “Banks in India are regulated by the RBI. All their products and services are heavily managed and monitored by the central bank. It is a very well-regulated environment, precisely why consumers and investors implicitly trust the Indian banking system. Crypto companies still need to learn how to operate in a regulated environment where customer data, customer sentiment and customer experience remain critically important.”

The Crypto Winter Will Be Here For Atleast Next 12 Months

The bitcoin hashrate is currently at its maximum. The number of transactions per second per block is at an all-time high, and so is the number of wallets. But despite the traction, the prices of bitcoin, ethereum and other cryptocurrencies have continued to crash since November last year. This could be the longest crypto winter since 2018, experts think.

Tom Loverro, who used to sit on the Coinbase board till 2021, thought that “in 2022, crypto will go even lower. [The year] 2023 will be mostly flat to down until indifference sets in, signaling a long-awaited spring thaw. Crypto macro will improve in the second half of 2023.”

He added that VCs and crypto investors suffering from the recency bias would expect a quick rebound because it happened after the 2020 Covid black swan. But the current bear market is not a black swan. It is the outcome of rising interest rates. Hence, these investors will suffer until the rates stabilise.

“Have enough cash to get through the next 30-36 months and, even more importantly, sufficient FAITH to survive the winter without wavering or chasing new and non-crypto directions. Crypto will come back bigger than ever,” advised Loverro.

Sogani of CREBACO agreed that it would be a considerable wait and companies should act accordingly. “Coinbase appears to have prepared for a long runway. Look at the handsome payouts given to employees who were laid off.”

Will Indian crypto companies be resilient enough to survive the winter?

We will come back with more insightful stories on the challenges and opportunities embraced by Indian crypto entities. Stay tuned.

Is SMS OTP authentication as safe as we believe?

Business Development: How 2022 Trends are Changing the Way We Do Business