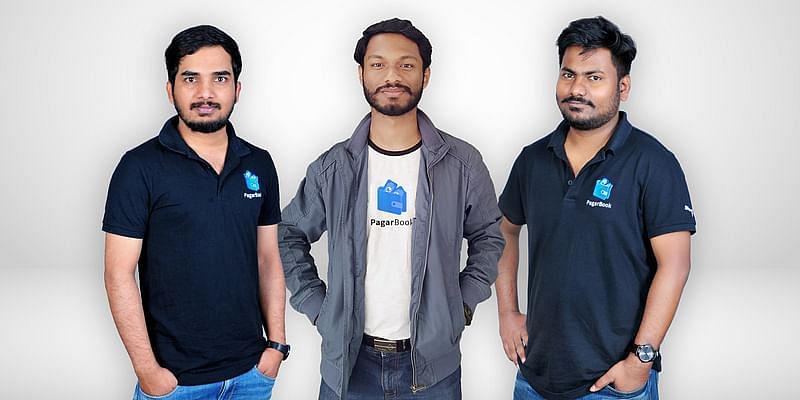 Adarsh Kumar, Rupesh Kumar Mishra, and Arya Adarsha Gautam had one thing in common – the trio were all from Tier II and III cities in India. This gave them the unique advantage of understanding the core problems of the region.

They knew there was a knowledge and information asymmetry that needed to be addressed. After some trials, they realised the SME segment needed digitisation, especially the financial parts of the business. While Adarsh and Arya were batchmates at IIT Bombay, Rupesh had done his engineering from a college in Jaipur and was introduced to Adarsh and Arya through their mentor.

The trio got together to introspect, and decided on building a startup that the potential to address a large market. All the brainstorming sessions led to the birth of Pagarbook in 2019 – a platform that helps in streamlining complex financial and staff management record maintenance for SMEs.

“PagarBook is a human capital platform that caters to SMEs and MSMEs of India. The app basically digitises and simplifies the numerous numbers and financial records that float around the old school papers and registers,” Adarsh explains.

The team had realised that the SME workforce is very different from white collared employees.

According to Adarsh, there are nearly 56 million such enterprises in various industries, employing close to 124 million people.

After thorough research about India’s SME sector, the colleagues explored multiple trial-and-error methods to understand the business owners’ problems and its depth. That gave birth to the idea of PagarBook.

Over the last six months, PagarBook has increased its user base to eight million, and launched its User Interface (UI) in 13 different languages.

Users can fill information such as number of employees, payment structure, working days, leaves etc. for the app to activate the desired service, after which the app directs itself to record and analyse the data for future use.

The journey has not been as simple as it seems, because the team had not originally started with the SME segment.

They had first looked at an Indian language quality, knowledge-sharing social media platform, simply put an Indian-language equivalent of Quora. This led them to start GyanApp in 2018, for which they had also raised funding from India Quotient.

However, they quickly realised that the market was tough, and they weren’t getting the expected returns. It meant going back to the drawing board.

They knew that the segment was different and needed a little more detailing, which got them to explore the SME space.

They found that in India more than 50 percent of the SME owners suffer every month because of the complex financial and staff management record maintenance. Presently, there are nearly 56 million such enterprises in various industries, employing close to 124 million people.

While PagarBook was a significantly different idea from what they started out with, they still had the support and backing of their investor.

Anand Lunia, Founding Partner, India Quotient, says, “When we invested, they were building an Indian-language equivalent of Quora. That is a very tough space. The founders put in solid effort but soon admitted that it is a tough space. It’s rare for founders to admit something like this, particularly if they still have money in the bank,” Anand says.

Anand explains that this is when he suggested that they dig deeper into the market.

“We all then agreed on the PagarBook plan. While it seems to be completely the opposite of the original idea, the core skills of building a product for the non-English speaking audience remain the same,” Anand says.

Giving the blue-collared workforce a payslip

Anand says PagarBook is one of the first companies in India to give a ‘payslip’ to every blue-collared worker. What this means is all these workers have a financial profile, record of experience, and earnings. This profile will help these blue-collar workers enter the formal economy, even though many of them may not be permanent employees at par with their white-collar counterparts.

“Before launching our pilot project, our first question was, ‘do people even want it?’ But again, if you do not have a product, you would never know how useful it could be to people. We took quite some time to figure out the exact model,” Adarsh says.

The PagarBook Suite comes with mobile apps for Android, iOS and desktop software. The data is synced in real-time between desktop and mobile devices. The features include attendance marking, automatic salary calculation, salary slip generation and customisation, staff onboarding, a dashboard for SME owners and more.

Why the need for PagarBook?

“Between October to December 2018, we met more than 300 SME owners (and their employees) ranging from retail shopkeepers, wholesalers, manufacturers of hardware, embroidery, loom, construction and furniture to diamond industries, in Surat, Ahmedabad, Patna, Sivan, Jaipur, New Delhi, and Bengaluru to understand their concerns,” Adarsh explains.

In these meetings, they pointed out that traditional ways of working were slowing down their work and reducing efficiency. Some of the pain points they specifically mentioned were – maintaining bahi-khata and recovery for retailers and wholesaler, invoice and inventory management (while this problem is solved by other apps, the team found out that people needed industry specific solutions) and staff salary, work and attendance management.

Many merchants have between four to 20 people working for them (typically every segment except a small retailer). These employees typically earn between Rs 8000 -Rs 15,000 depending on the experience and industry.

On a regular basis, some of these employers hand out advances anywhere between Rs 100 and Rs 1,000 to the employee for their day-to-day expenses. Also, this industry is only work driven, so 90 percent of the workers do not have the privilege of paid leave.

To maintain all advances given during the month, work done, and attendance (hours/days) people use two to three ledgers/attendance cards. In most cases, employees also maintain a ledger of the same for reconciliation.

Staff hiring was another problem area. A lot of employees leave after seven to eight months of work, and most of these exits are sudden. Employers have nothing to go by other than the employee’s word.

There is also no official document or digital record of previous employment. Sometimes employers also hire on contract (only for three to four months months) depending on the work/volume cycle.

“This is done through contractors who charge 10-40 percent of an employee’s monthly salary. Also, according to a report by NSSO (National Sample Survey Office), approximately 50 million blue-collared employees switched their jobs annually,” Adarsh explains.

Post their extensive study, the team concluded that close to 25 to 40 million SMEs needed a solution for staff salary, work and attendance management, and hiring problems.

Also, over 200 million workers’ lives could be improved just by standardising their work and financial history. There was urgent need to design financial products like loans, insurance, savings accounts for these people, which could be a first mass-scale effort to bring them online financially.

“A wish to create a technology that has a multiplier effect and solves the needs of small businessmen or the SME community led us to start PagarBook,” Adarsh says.

The team had first decided to soft launch into the market using digital campaigns. Within a few weeks though, it attracted thousands of downloads and an active user base. Over the last six months, PagarBook has increased its user base to eight million, and launched its User Interface (UI) in 13 different languages.

A user can fill information such as number of employees, payment structure, working days, leaves etc. for the app to activate the desired service, further to which the app directs itself to record and analyse the data for future use.

With the solution serving all staff management needs, it is not restricted to a single business/sector. Hence PagarBook serves clients from various industries. While starting to work on the technology, we obviously had to understand it from many aspects, says Adarsh.

Speaking about the pandemic’s impact, he explains, “COVID has been tough on both employers as well as employees. We had seen payouts to employees drop close to 50 percent in the first wave, and close to 70 percent in the second wave. Speaking to a few of the employers, we found that some of them were gracious enough to provide food and shelter to their employees during these times, albeit for a limited time.”

Ironically, the pandemic year of 2020 was the year of hyper growth for PagarBook, and it is when they touched eight million customers.

“We started full-fledged on our paid premium offerings roughly three months ago, our ARR is growing 50-60 percent MoM. Speaking about fintech, we have released Early Pagar products for a very specific and small set of employees this month, where we have deployed Early Pagar loans to a few 100 employees. The plan is to double down on experiments in fintech towards the latter part of the year,” adds Adarsh.

PagarBook’s basic product is free on Android and iOS; it has an annual subscription fee of Rs 2,399 on desktop premium and Rs 1,199 on app premium.

A study by Google-KPMG showed that digitally empowered SMEs have about twice the revenue growth projections compared to offline SMEs.

As of now, the segment has several startups – Khatabook, Lendingkart, Five Star Finance, and several others. However, PagarBook is focused on the payrolls and credit segment.

“Once we scale the payroll app, we will build financial products for the workers,” adds Anand. Adding to this, Adarsh says, “The plan is to go deep into building our SaaS and building products for improving the financial well-being of the employees, with products like Early Pagar, savings account and insurance.”

Elevating Your Business: Tips to Reach the Next Level

5 Reasons To Invest In A Rental Property Business

Cash Out Refinancing: A Homeowner’s Friend Or Foe?