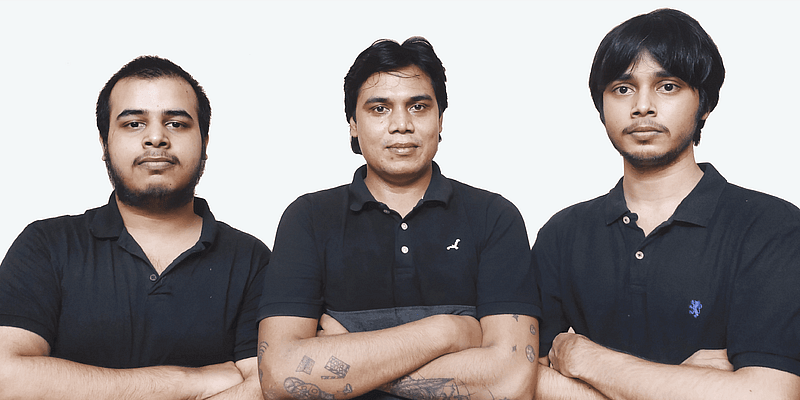 The best solutions are those which come out of addressing a personal pain point, and that is how MagTapp Technologies came into being. Three friends from Bihar felt the language barrier with English and decided to solve the problem for people facing similar issues by letting them search the meaning of words using visuals for easy understanding.

All three founders were born and brought up in Bihar and faced difficulties with English while growing up. But the turning point came when Satyapal, now 32, was passing through Rasalpur village in Bihar. He noticed that a girl was doing her homework by reading an article online. While reading, she was continuously switching between the browser and dictionary apps. This visual stayed with him, and he discussed it with Rohan and Abhishek.

“From the very first day, I had this idea of a ‘visual meaning of a word that can be seen without switching apps’,” says Satyapal.

All three friends have been serial entrepreneurs. While Satyapal ran his own media company in Mumbai, the brothers – Abhishek and Rohan – were running a product development and digital marketing company, alongside pursuing their studies in Meerut. Abhishek was in Class XII at Army Public School, and Rohan was in the first year at N A S College, Meerut, pursuing Bachelor’s of Commerce.

In their 12 years of schooling, Rohan and Abhishek studied in 7-8 schools due to their my father’s posting in various places. Such exposure to different cultures and languages would help them to build and ideate MagTapp.

Satyapal knew Rohan since the time they worked together on a blog on Facebook. Rohan had also read Satyapal’s authored books, which helped developing a bond. So, they decided to work together as co-founders.

“After Satyapal told me about this problem, I realised I too had been facing it on a day-to-day basis while doing my college assignments,” admits 20-year-old Rohan.

He came up with the idea of integrating a web browser, document reader, dictionary, and translator into a single app. According to Rohan, most of the time, content is being read online in a web browser, on documents, or on WhatsApp, Facebook, or text messages.

“So, creating an all-in-one app with a multi-purpose feature made sense,” he tells YS.

Being a techie, 19-year-old Abhishek created the first prototype of MagTapp. The founders presented it to a few investors and bagged a seed round of Rs 1 crore to start the operation. The app was launched in July 2019.

A big challenge that the startup faced initially, Rohan recalls, was to get good techies. “As a young company, it sometimes gets a little hard to attract a great pool of talent, especially in technology. But we have overcome this by hiring great developers and then training them as per our needs,” he says.

“Our mission is to help billions of people in India and overseas read content in any language seamlessly, without any language barrier. We also want to help 200 million students in India by bridging the language barrier in reading educational and other content, both online and offline,” says Rohan.

MagTapp helps users read content by providing them with visual cues. To understand words that are difficult to understand, users can tap on them to get a visual meaning of that word. This functionality does away with the need to search for words in hefty dictionaries or on Google.

Magtapp basically integrates a visual dictionary with a web browser and document reader to facilitate a smooth and distraction-free reading experience.

The startup is recognised by Startup India, and with a team of 105 people, it handles 6 lakh monthly active users (MAUs) on its Android app. It also claims to be the world’s first visual browser, and is going to soon be available on iOS as well as on the web.

A 2020 report by WATConsult estimates that 70 percent of internet users access content in Indian languages. There were about 500 million active internet users aged five and above, according to a report released in early 2020 by the Internet & Mobile Association of India (IAMAI) and Nielsen.

In terms of web browsing, MagTapp competes with Jio Browser, Opera, and Firefox, and with Oxford, HinKhoj, and Collins when it comes to online dictionaries. But the founders say that the startup stands out because “as a whole, we are not competing with any app but coexisting because we are the only app which provides visual meaning on the go at the time of reading a page,” says Rohan.

He adds that the app integrates web browser, document reading, image dictionary, online book library, online video courses library, translator, and gaming features on one app of the size of 35 MB. Rohan explains this makes the app really light and can be downloaded on any smartphone device.

The founders tell that the app has been free for its users, and will continue to be free in the future as well. So, the company reaps its revenue from various sources such as ads, promotion of affiliate products, search engine traffic, and commission on sales.

“We have also introduced an online book library where more than 60,000 free books are available. We are working towards onboarding different content creators on our online library section and selling their content by sharing the revenues,” tells Rohan.

He says that the MagTapp browser was launched in December 2019 and the image dictionary feature was added in October 2020. Within a short span, the startup has been able to acquire more than two million users.

“We have more than 600,000 Monthly Active Users, and the average usage time by the users on the app is 12 minutes,” tells Rohan.

He says that at this point, the company is testing various models and is making Rs 1.5-3 lakh in revenues per month. Going forward, it plans to reach the 10 million users mark and generate Rs 1 crore revenue by FY22.

After raising seed capital of Rs 1 crore from angel investor Hasmukh Damji Gala in Mumbai, the startup also raised Rs 2.8 crore in pre-Series A round last year from him. MagTapp is now looking for a Series A funding round to the tune of Rs 10 crore for product development, creating an offline presence, and collaborating with content creators for marketing.

Rohan shares that some of the product development plans include AI-driven personal assistants called MagBot, which will help the users to learn new skills with MagTapp, and will also give a summary of the content, news briefs, general knowledge etc.

“We are planning to launch more than 100 skill-based educational games by the end of this year, and will also launch an iOS and a desktop version of MagTapp,” Rohan says.

The company is eyeing the next billion users, especially those who are first-time smartphone users. “We are solving the language barrier problem for everyone who is using the internet to read,” he signs off.

Want to Be a Good Wedding Planner in Sacramento? Here’s Everything You Need to Know