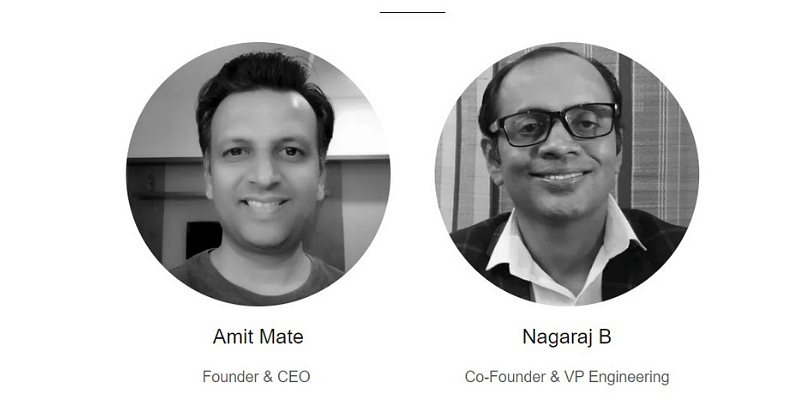 For Amit Mate and Nagaraj B, co-founders of GMAC, the decision to launch a startup together wasn’t a difficult one, given the camaraderie they’d always shared, be it as classmates at the Indian Institute of Science (IISc) or while working at Qualcomm.

The journey from being classmates to business partners was inspired by a single goal: to make innovative products using state-of-the-art technologies such as artificial intelligence, 5G and Edge computing accessible to one and all.

With this goal, the duo launched GI4ALL- an AIoT-as-a service for businesses, enterprises and city governments. GMAC is commercialising its AI/ML software and algorithms to power applications such as touchless attendance, visitor management, automatic licence plate recognition and activity recognition.

Customers can access these services by signing up on their portal gi4all.web.app and installing the GI4ALL app from Google Playstore on multiple Edge AI cameras. GMAC’s AI/ML software is capable of processing all AI on the cameras itself in real time, so customers don’t need to buy and maintain expensive servers.

GMAC also provides a server-less cloud component to store relevant data and share intelligence across devices – which makes their solution more robust than any other systems out there in the market.

A real-time dashboard ensures that the authorised stakeholders get regular updates and reports as captured by the AI/ML software. These offerings run on Android devices that are accessible by almost everyone.

The inspiration behind GMAC’s design ideology can be traced back to Amit and Nagaraj’s vast experience of working on cutting-edge technologies such as 3G/4G, Edge compute, VRand AI/ML during their stints with Qualcomm between 2008 and 2019.

Amit has vast global R&D experience in leading and bringing new technologies to life such as 3G-Femtocells, 4G modems, real-time VR and AI across Nokia Research (Helsinki, Finland), Qualcomm Research (San Diego, CA) and other high-profile startups (Silicon Valley and East Coast). He also has several award-winning patents to his name. Nagaraj was extensively involved in commercialising chipsets like the Snapdragon 630 and Snapdragon 730 which are being used in millions of smartphones today.

With their experience of working on pioneering technologies for consumer electronics, the duo wondered how such solutions can be made available to businesses that lack the IT infrastructure for a massive digital transformation, and whether AI/ML models could simplify such access.

“Once we decided to launch GMAC, we aimed to combine AI, IoT and SaaS platforms in a way that it becomes easy even for SMBs/SMEs/governments to deploy sophisticated tools for tasks like recording attendance, visitor management and access control using facial, vehicle and activity recognition,” Amit says. “We wanted to design plug-and-play solutions that can be used with various IoT devices such as digital locks and boom barriers using AI.”

Turning a crisis into a deep tech opportunity

The business model was finalised by May 2020, right when the COVID-19 pandemic was at its peak. However, the founders made the best of the situation.

“During the pandemic, a lot of students who had plans to study abroad were stuck in the country,” Amit recalls. “At the same time, a lot of talented professionals were also looking for challenging opportunities in the AI/ML space. This enabled us to hire the best professionals from across India. So, we laid the foundation of the company by choosing the best talent to design our products.”

Another factor that helped GMAC is the launchpad they got from the local deep tech community.

“IISc announced GMAC as one of the upcoming startups which were a part of its ‘Deep Tech @ IISc’ cohort in 2019,” said Amit.

The initiative was launched especially for IISc alumni, faculty members and students and aimed at supporting solutions that leveraged deep tech to drive impact in the society.

“Then Qualcomm welcomed us to their Smart City Accelerator programme and NVIDIA to their Inception cohort and provided us the much needed visibility in the global deep tech community,” he adds.

According to the founders, the pandemic helped them design products that were future-forward. “For instance, the residential society where I live has over 100 security guards, domestic help and gardeners coming in every day,” Amit says. Before the pandemic, they were paid according to the number of days they reported for work, and their attendance was recorded via a finger-printing device. But during the pandemic, the residential society asked Amit if his company could design a system that can allow attendance to be recorded in a contactless fashion. “So, we installed the GMAC touchless attendance device on multiple gates to solve the problem,” says Amit.

What worked in GMAC’s favour was the product’s easy-to-use interface. “Almost anybody could use it and it did not require any changes in the existing IT systems of the society. So, every time a new maid or guard was hired, they could easily be added to the system without any hassles.”

Talking about the USPs of GMAC’s offerings, Nagaraj says these products’ versatility is their biggest advantage. “There are a large number of SMEs and SMBs that don’t want to shift from their legacy systems,” he notes. As GMAC solutions run on Android, they can be accessed by everyone who has a smartphone.

“Our solutions are cost-effective, and do not require one to switch to sophisticated technologies like cloud server environments, which might not always be feasible for places like factories, hospitals and schools, given their IT constraints,” Nagaraj explains.

Moreover, as all the AI processing happens on camera, GMAC’s customers do not have to buy and install any servers. Their cost-effectiveness and accessibility give GMAC an edge over several established players.

The startup depends on Google to shield its software and devices from cyberattacks and security breaches. “Using Google’s security features has helped us build standardised products. While the software has built-in biometric protection, it is also password-protected and can be accessed only by the admins. The devices have clamps and locks to hold them in place and prevent theft,” says Amit.

For now, the two friends-turned-business partners are busy scaling their sales by targeting the ideal customer profile for their products.

Less than a year in running, GMAC is already taking strides with a technology that can be scaled, and is charting out growth strategies in areas such as facial recognition, and designing solutions that can sense hazardous situations and accidents in factories. “We are also working on activity detection solutions, which can help companies improve management of employees and detect staff members who might be idling away during shifts,” Nagaraj says.

While there might be similar solutions being offered by other players, Amit says that most of them are not plug-and-play or 5G-ready. “This is where GMAC would come in,” he adds. Currently, GMAC solutions have been deployed in residential societies, hotels, hospitals, colleges, movie theatres and factories.