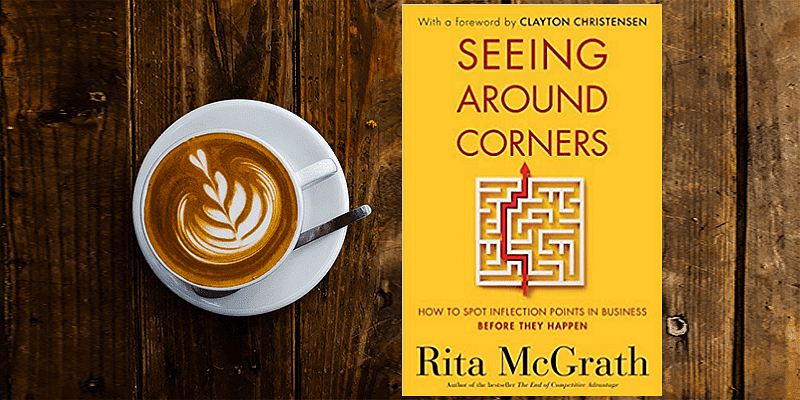 Inflexion points, or major shifts in the business landscape, can lead to new opportunities for entrepreneurs – as well as destruction or rejuvenation for incumbents. Frameworks, checklists, and examples of such business transformation are well presented in the compelling book, Seeing Around Corners: How to Spot Inflexion Points in Business Before They Happen, by Rita McGrath.

The foreword is written by the late professor Clayton Christensen, a scholar of disruptive innovation. See my reviews of his books Competing Against Luck, The Prosperity Paradox, and The Innovator’s DNA.

Rita McGrath is a Columbia Business School Professor and corporate consultant. Her earlier books include The End of Competitive Advantage: How to Keep Your Strategy Moving as Fast as Your Business; MarketBusters; and The Entrepreneurial Mindset.

Her latest book is a must-read for large firms, as well as mature startups who want to nurture their innovation edge for future success. The material is thoroughly referenced, with over 30 pages of resources.

Here are my key takeaways from this provocative 260-page book, summarised in the table below. See also my reviews of the related books The Invincible Company, From Incremental to Exponential, Managing Digital Open Innovation, Customer Innovation, Future Tech, Little Bets, Dual Transformation, and The Serendipity Mindset.

As defined by Andy Grove in his book Only the Paranoid Survive, a strategic inflexion point is “a time in the life of a business when its fundamentals are about to change”. This shift has actually been gestating for a while – it happens “gradually, then suddenly,” to quote Hemingway from a different context.

Triggers include changes in technology, user behaviour, regulation, and demographics. They pose new opportunities for agile players while also make others obsolete. In the early stages of inflexion points, it is common even for experts to disagree on their impact, Rita observes.

Companies who successfully capitalised on inflexion points include Amazon, Adobe, and Fujifilm, while those who became irrelevant include Blockbuster, Radioshack, and Toys ‘R’ Us. Others made the change but somewhat late, such as IBM and HP.

Other examples of industry shifts include the rise of sound amplification devices that are not officially called hearing aids, which are much more expensive.

The first step for business leaders is to effectively sense inflexion points at the fringes. After all, “snow melts from the edges,” in the words of Andy Grove.

Examples of unwillingness or inability to see and act on such changes include Big Tech firms’ late responses to regulatory and social pushback on privacy and ethical concerns, and to alarm over the activities of bad actors on the platforms. Such blind spots are dangerous, Rita cautions.

Companies should focus on leading indicators (e.g. customer love) and not just lagging (EBIDTA, growth) or current (ERP dashboard) indicators. They should investigate developments in an entire arena, beyond current definitions of industry boundaries.

Warnings signs of impending shifts are customers switching to ‘good enough’ offerings, unexpected competitors, and less revenue from new innovations. Formerly ‘tolerable’ features are now seen as ‘enraging’ in light of new capabilities, the author explains. Business model assumptions should be reexamined in the light of emerging shifts and ensuing possibilities.

Examples include Lou Gerstner’s deep dive sessions with frontliners, and Citibank requiring leaders to report on insights from at least one customer per month. Adobe’s Kickbox programme encourages groups to experiment, document and invest in small ideas.

Gillette was shaken by D2C competitors, and launched its own on-demand service. The conventional apparel industry was disrupted by teenagers’ preference to spend on smartphones, and by nimble players like Zara, Zappos and Missguided.

Netflix introduced three shifts in the market – rental DVDs, streaming, and original content. But it too had missteps in the transition from DVDs to streaming in terms of assessing customer willingness to pay or change habits. Eventually, the two teams were kept separate, with different metrics and incentives.

Uber disrupted the prevailing taxi model in cities like New York by leveraging the smartphone platform to improve booking, riding, paying, and providing feedback ratings. Such companies may even expand to e-scooters and bike-sharing.

In contrast, mapmaker Rand McNally’s CEO Robert Apatoff dismissed the impact of digital maps; the company was eventually sold in 2007.

The benefit of hindsight yields useful insights into those who spotted and rode the inflexion point of the Internet boom 25 years ago. For example, Microsoft could see it coming but missed being an early player in smartphones, mobile operating systems, and search.

Trends to watch and ride today include renewable energy and the rise of skills-based training instead of full degrees, the author explains.

To sense and respond to inflexion points, Rita urges companies to create a plan to learn fast and open people’s minds to possibilities. Intel even employs futurists and science fiction writers in this regard.

“An entrepreneurial mindset is incredibly useful here. The key is being discovery-driven,” Rita emphasises. Only experimentation can help deal with uncertainty. “Habitual entrepreneurs use a set of practices that help them see around corners, such as building varied, non-redundant networks of connections for advice, resources and insights,” she adds.

Unfortunately, many companies are under the illusion that innovation is all about a big idea instead of a number of small ideas, the author cautions. Many only pay lip service to reinvention (“innovation theatre”).

BBC’s Digital Media Initiative of 2008, which involved partnering with Siemens and Deloitte, did not succeed since it did not bring about the necessary shift in core workflows and culture. An agile approach with small bets and broader employee inputs would have been better, according to Rita.

A resilient culture focuses on exploration as well as exploitation, Rita affirms. The focus in Microsoft has shifted to integration (not silos of specialisation), and capabilities rather than departments (e.g. AI, aesthetics, cloud, silicon).

Clarity of strategy and alignment helps overcome infighting and confusion, and unleashes enthusiasm, Rita advises. Every employee should be empowered to spot and act on inflexion points in some way.

Satya Nadella ‘shadowed’ Microsoft board member Reed Hastings to observe how quickly Netflix pivoted on new insights. The company also had some missteps with the Tay chatbot on Twitter, but the CEO provided air cover to encourage more experimentation. Microsoft has performance metrics for employees as well as “power metrics” about future performance.

Rita advises business leaders to create an appetite for innovation, engage with new talent, begin with small proofs of concept, and embrace diversity. They should promote broad-based internal communication and storytelling, and promote continuous renewal through long-range focus.

Such changes can be hard to implement – it took Walmart ten years to become relevant in e-commerce, she observes. There were also controversial decisions along the way, such as the acquisition of unproven startup Jet.com.

Typical antibodies or innovation blockers are lack of incentives, fear of failure, short-term focus, aversion to cannibalisation, intolerance of uncertainty, silo structure, lack of customer focus, and no career incentives.

Rita urges business leaders to be open to peer mentoring, welcome unfiltered and critical feedback, share customer stories, and scope out frontier technologies. They should articulate and align group strategy, and create a simple yet effective rallying cry.

Many of these principles also apply at an individual and personal level. It is important to look beyond the usual buddies, and join forums with diverse professionals (e.g. Peter Sims’ Parliament). Consultants and coaches can help assess and improve one’s leadership performance by interviewing peers and colleagues.

It is important to invest in cultivating a number of skills, and make connections across disciplines, Rita adds. Framing different future states and stories and working back from them can help catalyse new actions today.

“The good news is that inflexion points always represent opportunities for someone. There is no reason that shouldn’t be you,” Rita signs off.

UPI transactions touch 3.5B for August, up 9.5 pc, says NPCI

Why India is the new hub for Big Data analytics patents