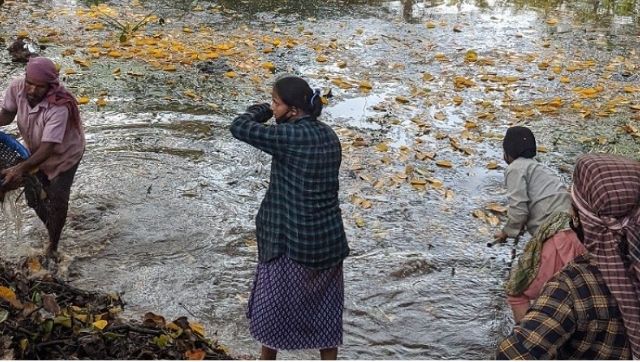 A group of concerned citizens realised the value of neglected water bodies and came together to form a citizen action group called Catch2o to revive water systems in and around their villages.

When Goan artist Harshada Kerkar looked out of her home window, she was used to seeing the scorched, parched buffaloes gravitating to the pond in front of her house in large numbers. During the summer months last year, when she didn’t see them lounging in their favourite watering hole, their absence concerned her. “This pond is their respite during the summer months.” she says. Harshada, who is now in her fifties, reminisces the old days when traditionally there was a pond in every village in Goa. Buffaloes used the water to wallow in, other cattle came to drink from it, farmers used it to water their crops. Now it seems that the water woes may have left these animals stranded.

Harshada’s vivacious niece, Sharada Kerkar, an artist in her early twenties, also lives nearby and faces the same pond in the Saligao village of Goa. There are around 30 households around this pond and the village has around 1500 households in total.

While the two had previously had many conversations around reviving the dying ponds and nallahs in their village, the COVID-19

instigated lockdown allowed them the much needed time to reflect on, discuss and develop a plan for the revival of the key waterbodies that have been in a state of disuse for years. Along with some like-minded people for support, they decided to revive these as biodiversity hotspots.

The idea serendipitously ended up being an income-generating activity for migrant workers who had lost their jobs and were stranded in Goa during the pandemic. The project hired some of the labourers to revive ponds, helping them earn during the desperate times.

The group admits that bringing the stranded migrant workers as labour was incidental. While they hadn’t planned it this way, it was a blessing in disguise for both parties. The COVID-19

lockdown had left daily-wage migrant workers from states of Uttar Pradesh, Bihar, West Bengal, homeless and pretty much at the mercy of good samaritans for food and water. They are always eager to find work, and at this time, even more so. he CatcH2O group started their work last year with cleaning up a pond in Saligao village of Goa. Image via Mongabay-India/Sharada Kerkar.

For the first month of the project, the team hired around 15 migrant workers who worked on draining the ponds, cleaning them, and repairing or building the boundary walls as well as bringing in their own expertise.“When the workers from UP and Bihar were afraid to jump into the water, the ones from West Bengal, who knew how to swim well, came to the rescue,” Sharada recalls with a smile.

The work started on 1 May as a pilot phase which lasted until 15 June. During this time they cleaned the Grandmorod pond in Saligao after which they moved on to identifying other water bodies. A pond in the nearby Pilerne village was cleaned.

So far, five water bodies – three wells and two ponds – have been cleaned and eight more ponds have been identified for cleaning in the next phase.

The rain-rich state of Goa has been seeing water scarcity of varying levels for over two decades now. Some of the reasons for this scarcity are increasing population, standard of living, climate change, and pollution of the existing water bodies.

The number of tourists that visit the state is roughly four times that of its resident population. This also puts immense pressure on the water supply.

Adding to the challenge of low per capita supply of water in Goa, is the fact that the villagers tend to neglect the upkeep of the water bodies. The pond in Saligao, like many other water bodies in Goa, is community-owned.

Sharada says that the problem is quite basic in nature – there are homes surrounding ponds and these contribute to the ponds getting dirty – some of the homes have their sewage drains being emptied out into the pond, some were emptying their dry waste beside the pond. It is the responsibility of the residents to keep their communidade water body clean. Often, this doesn’t happen simply because the residents don’t get along with their neighbours, so they choose to carry on living with the stench rather than fixing the issue, she says. Waste that emerged from the pond after cleanup. Image via Mongabay-India/Sharada Kerkar.

The coming together of specialists

With the goal of saving the biodiversity and water systems in and around Goan villages, a motley crew of people forms this citizen action group, which they call CatcH20.

While Sharada, a social-sector worker, spearheads administrative responsibilities, fundraising and logistics for the project, Harshada chooses to stay behind the scenes and work on identifying the ponds in need of revival; mobilising the community, building on-ground contacts as well as hiring labour.

Joining the duo in the effort is Goan architect Hyacinth Pinto known for her environmentally-friendly mud houses. Pinto, a passionate environmentalist since her college days, speaks matter-of-factly about her involvement in the project, emphasising on the issues of water shortage and contamination of freshwater bodies in Goa.

Pinto brings her structural expertise into deepening the ponds and building their walls. She teaches the workers how to use the mud and silt from the ponds themselves to construct the walls of the water body. The soil is clayey in nature and when it is combined with the vegetation and moulded into balls, it forms a great material for the banking walls of the pond, says Pinto, who is passionate about traditional building techniques and encourages the workers to use the methods that they would normally use in their villages. She was certain that they wanted to avoid using a JCB to help with the clearing since it would destroy the flora and fauna of the region too.

The goal of the project had been not only to revive the water bodies, but also to enhance the biodiversity surrounding them. A chance encounter with ecologist Aaron Lobo helped with an intervention at the right time as the team was going to plant ornamental plants around the cleansed ponds. Lobo, now a team member, shares that his role in the project is from a biodiversity perspective to promote the non-invasive species of plants as well as fish because the interconnectedness of certain species will help truly revive the ecosystem. With his expertise, the project helps rare, indigenous species survive and be revived. Success so far has been evident in one of the ponds they have cleaned, where birds like the marsh harrier and jacana are returning.

The initiative was open to employing anyone who had no other income coming in and along with stranded migrant labourers, who were paid daily wages, it also brought on board the Lamani (Banjara) women, who would normally eke a living collecting bottles and other waste from the roadside. With the lockdown, they didn’t have much work because there weren’t any tourists. Pond in Saligao before cleaning. Image via Mongabay-India/ Sharada Kerkar. Pond in Saligao after cleaning. Image via Mongabay-India/Sharada Kerkar.

Apart from the workers, supervisory support came from the community residents. A 65-year-old woman supervised the work at the first of five ponds that are being cleaned. The financial support for the project came from members of the group as well as from the residents of the community. Since these are freshwater bodies belonging to the communidade, their cleaning and upkeep require no special permissions from the local panchayat. Once the residents understood what the end goal was, they were quite open to contributing. The group also managed to raise some funds from the Rotary club.

Some help from the Goa State Biodiversity Board came in the form of plants and saplings. The government is also looking into giving the project a grant. Pradip Sarmokadam, member secretary of the board said “this is a model project that can be a case-study and we are keen to extend our support.” If the project goes well, the government could encourage its replication in other parts of Goa.

The stakeholders have been further encouraged by the response to their efforts so far. They are looking to employ even more scientific methods moving forward and plan for the work to resume in March 2021 when the ponds are dry and can be cleaned out efficiently.

This article was originally published on Mongabay.com. Mongabay-India is an environmental science and conservation news service. This article has been republished under the Creative Commons license.

Asus delays the launch of ZenFone 8 series in India due to the ongoing COVID-19 crisis- Technology News, FP