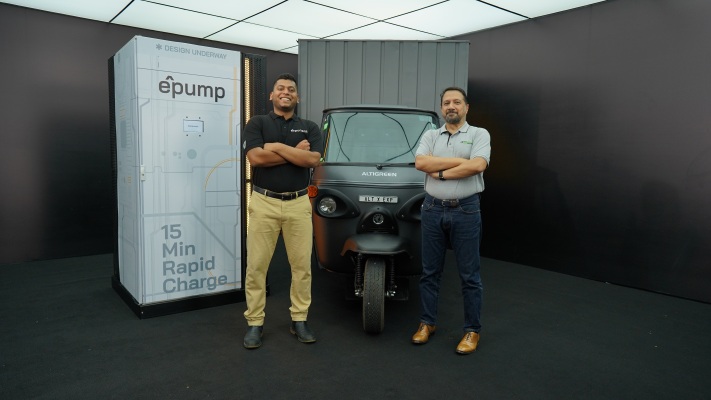 Bangalore-based Exponent Energy might have come up with a way to deliver 15-minute rapid charging for electric vehicles. The startup, which just raised a $13 million Series A, relies on a combination of its proprietary battery pack and charging infrastructure to achieve such a feat.

Exponent Energy’s business model is geared towards OEMs building commercial EVs for fleet purposes. Ideally, the company works with the OEM to integrate its battery pack, or e^pack, that can then be charged quickly via Exponent’s network of chargers, or e^pumps. Earlier this month, Exponent announced its first partnership with Altigreen, an Indian electric cargo vehicle manufacturer, launching the Exponent-enabled Altigreen neEV HD, a three-wheeler that both companies say can be fully charged, from 0% to 100%, in 15 minutes.

The rub is that the battery pack only charges that quickly when it’s being charged on Exponent’s charging infrastructure — if the e^pack is being charged at a standard charging station, it’ll take about 60 minutes, according to the company. Likewise, the e^pumps don’t deliver the same rapid charge to all EVs, so the two must be scaled side-by-side. This is how Exponent hopes to monetize its energy offerings. It will earn revenue from both the sale of the battery pack to OEMs and the charging on a recurring basis, according to Arun Vinayak, Exponent’s co-founder and CEO.

For comparison, Exponent’s business model is a somewhat similar model to Gogoro, the Taiwanese company that works with OEMs to integrate its swappable batteries into their electric two-wheelers while simultaneously building out swapping stations around the country.

Aside from the monetization logic of including the battery pack and charging infrastructure as a package deal, Vinayak says it just makes sense to do so from a technology perspective.

“15-min rapid charging is a two-sided problem,” said Vinayak. “It’s not just the battery but also the charger. The e^pump delivers 600A of current to the e^pack (15x industry standard) while managing individual cell characteristics including thermals to ensure safety, long battery life and performance consistency even at 50 degrees Celsius. Since our technology is present on both sides, we’re able to manage the flow of energy far more efficiently, safely and rapidly.”

Building out such a network will require funds, which is where Exponent’s Series A comes in. The round, which was led by Lightspeed with participation from YourNest VC, 3one4 Capital and AdvantEdge VC, will be used to scale up the e^pump network to 100 location points in each city Exponent expands into, starting with Bengaluru and eventually making its way to New Delhi, according to Vinayak. The company also aims to deploy 2,000 Exponent-enabled vehicles as part of its partnership with Altigreen.

Vinayak said the e^pack is scalable across multiple form factors, and Exponent Energy is currently in the engineering phase for partnerships in other segments, specifically three-wheeled passenger vehicles and four-wheeled cargo vehicles.

“Our primary focus is commercial vehicles and our primary customer is anyone running a fleet, from a single vehicle owner to an aggregator of 1000s of vehicles,” Vinayak told TC via email. “In India, commercial vehicles have the highest per vehicle energy use-age. (Constitutes 10% of vehicles, but consumes 70% of our on-road energy). This represents a highly concentrated market for an energy company like us as the segment is already convinced of switching to electric as EVs drive better than their diesel counterparts. However, the bottleneck for adoption is energy, as slow charging (3 to 6 hours) affects operations. Therefore customers are forced to opt for large batteries with short life thereby making owning the vehicle expensive.”

Why is now the right time to invest in these three sectors?

Goals Of Founders & Investors Are Not Aligned: Anand Lunia