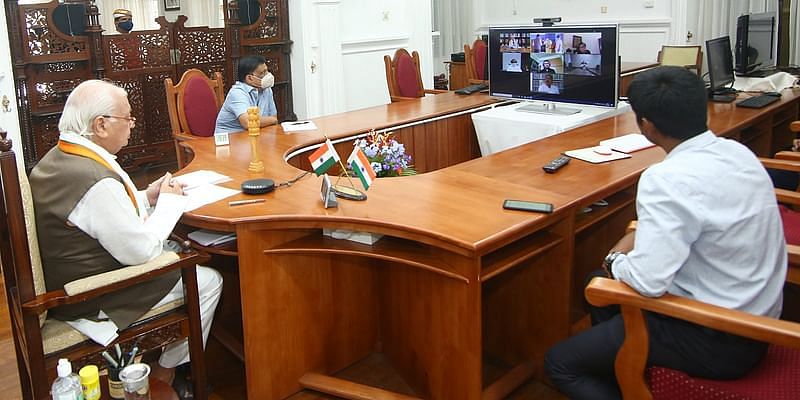 Kerala took a major step forward in its progress towards a knowledge society with the inauguration of the country’s first Digital University, based in the Technocity at Mangalapuram on Saturday.

Chief Minister Pinarayi Vijayan presided over the function, where Governor Arif Mohammed Khan, who is also the Chancellor of the Kerala University of Digital Sciences, Innovation, and Technology (KUDSIT), unveiled the varsity plaque.

Both the governor and the chief minister addressed the function through video conferencing.

In his inaugural address, Khan said the launch of the Digital University is part of the state’s resolve to embrace new technologies and desire to use them for bringing positive changes in the life of people, and become a global hub for higher learning and technology.

Praising the state government for recent initiatives in higher education, including the launch of Sree Narayana Guru Open University, the Governor said, “In any aspect of life, knowledge brings courage, understanding, acceptance, unity, and also liberates us from the clutches of ignorance.”

“The society expects the Digital University to provide intellectual support to lap up the new world of opportunities, arising through artificial intelligence (AI), Blockchain, Data Analytics, and other digital transformation courses,” he said.

In his address, the CM said the launch of the first Digital University in the country would open tremendous opportunities for youngsters.

“There should not be a digital divide in society. The government is involved in the efforts of attaining digital excellence in various fields. We need to foster technically-talented people in accordance with the changes in the new world,” the CM added.

According to official sources, the Digital University is set up by upgrading the two-decades-old Indian Institute of Information Technology and Management Kerala (IIITM-K), a centre of excellence in information technologies established by the Government of Kerala.

It is formed with a vision of creating a futuristic institution of higher learning, aspiring to set a global benchmark in digital technologies and management.

Its focus is on post-graduate programmes and research besides building strong industry-academic and academic-academic linkages with leading institutions in India and abroad.

Each school will be offering master level programmes in computer science, informatics, applied electronics, and humanities with various specialisation of the industry 4.0 world.

The adoption of technology in design, pedagogy, assessment, etc., is also a key driving factor for the new university, which focusses on early learners and re-learners with a host of programmes in cutting-edge areas of technology.

Towards this, specialised centres in areas like blockchain, AI, ML, cybersecurity, big data analytics, biocomputing, and geospatial analytics are to be set up in collaboration with leading international academic, research, and industry bodies.

The university will also lead the digital transformation initiatives announced by the Kerala government in the Budget 2021.

Spread across a 10-acre campus in Technocity, the first phase of the university has been completed with an academic and a hostel block.

Once fully developed, it will provide education to 1,200 residential scholars from its campus in addition to numerous learners, who will be associated with the University through various technological means.

In its first offline investor meetup, Soonicorn Ventures introduces ‘Funds as an Offering’