Apple’s Worldwide Developer Conference (WWDC 2021) kicked off today. On day 1 of the event, Apple announced the much-awaited iOS 15, macOS Monetery, iPadOS 15 and watchOS 8 software updates. The new updates are available for Apple Developer Program members at developer.apple.com starting today. Apple further confirmed that a public beta will be available to iOS, iPad and Mac users next month at beta.apple.com. Notably, the conference will end on 11 June. Compatible for iPhone 6s and later, the new iOS 15 introduces Spatial Audio for FaceTime to make it sound more “natural and comfortable”. It also adds new microphone modes that can separate the user’s voice from background noise. With a new grid view, users will also be able to see more faces simultaneously during Group FaceTime. The newly introduced SharePlay feature will be available on iPhone, iPad, and Mac. Image: Apple

Apple has also introduced ‘SharePlay’ for FaceTime that will allow users to listen to songs on Apple Music, watch movies and shows together. The feature will also allow screen sharing. SharePlay will be available on iPhone, iPad, and Mac. In addition to this, FaceTime also gets an option to create links so that you can use it cross-platform across the web and non-iOS devices.

iOS 15 also comes with a new ‘Focus’ feature to tweak what you want to pay attention to. The new iOS 15 gives a new look to notifications. Profile icons on notifications are now bigger. A new ‘Notification Summary’ will give a summary of all “non-time-critical” notifications at the chosen time of the day. FaceTime to get a portrait mode. Image: Apple

The new software update also gets a new Live Text feature which automatically recognises text in images, including handwritten, and makes it selectable, and you can even copy and paste it. With the new update, the Apple Maps app now has more details like crosswalks and bike lanes. A few US cities will also see a 3D city experience on the app.

The AirPods Pro get a new conversation mode, which will automatically boost conversation volume. AirPods also get ambient Find My features even when they’re in the case. The weather app has also got a design overhaul.

Apple has also announced new features for iCloud called iCloud+. This cloud storage will offer a “new internet privacy service, iCloud Private Relay, at no additional cost”. All the iCloud members will be upgraded to the iCloud+ and its plans can be shared with the Family Sharing Group. According to Apple, users will also get unlimited free iCloud+ storage for a new device temporary backup for up to three weeks even if they don’t have storage in their iCloud account.

Apple Mails get mail privacy protection that hides your IP address, location and disables trackers. iOS 15 introduces three new features to the Health app. Users will now be able to share their health data with family, caregivers, or a care team. The new ‘Trends’ feature will show the health metric of the users and the ‘Walking Steadiness’ feature will show a new metric to manage fall risk more efficiently.

The Apple TV app will now show “For All of You” row that will include “a collection of shows and movies based on the interests of selected people or an entire household”.

With iPadOS 15, iPad finally gets home screen widgets and an ‘App Library’ that can hide pages and rearrange them. The new software update also brings a multitasking shortcut that will easily let you switch between apps in split view. There will also be a ‘Shelf’ at the bottom that will show you all the opened apps. iPadOS 15 also adds quick notes that you can use parallelly with third-party apps and sites, and easily drag and note links and text. Users will also get ‘Tags’ that will help users categorise notes as per their choice.

Apple also announces a new ‘Universal Control’ feature that will allow users to use a single mouse and keyboard between iPad and Mac. According to Apple, “Users can even drag and drop content back and forth between devices — great for sketching a drawing with Apple Pencil on iPad and placing it into a Keynote slide on Mac.”

With the new macOS Monetery, Safari has got a new redesign. There are also tab groups that let you categorise your tabs to declutter the windows. Apple says that tab groups can also be dragged and dropped in emails. With the new update, the tab on iPhone has also been redesigned. MacOS 12 is called macOS Monterey, and the biggest update in this comes with Safari. Image: Apple

The new update brings AirPlay to Mac. This will allow users to play and share movies, music, games, images, presentations from their iPhone or iPad right to their Mac. Mac’s sound system can also be used as an AirPlay speaker. As per Apple, “this way, users can play music or podcasts on their Mac, or use their Mac as a secondary speaker for multiroom audio”.  The company has also confirmed that web extensions rolling out to iPads and iPhone. 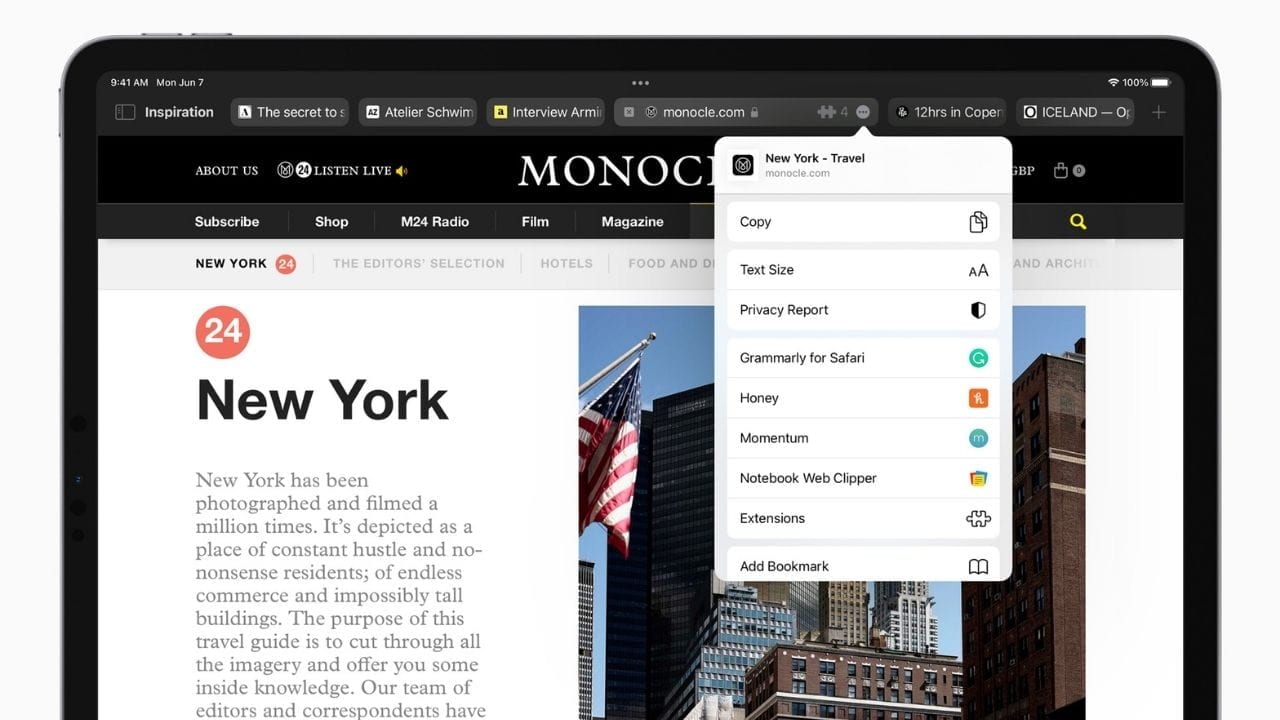 Web extensions are coming to iPhone and iPad. Image: Apple

Just like iPadOS 15, the new macOS also brings the ‘Universal Control’ feature that allows users to drag and share details across iMac, MacBooks and iPads.

watchOS 8 brings a revamped design for the Breathe app. Apple says that with the new update, Apple Watch will now track your respiratory rate. watchOS 8 also adds new Tai Chi workouts for its users. In addition to this, the Apple Watch also gets new portrait watchfaces. Users can also rearrange and resize the time stamp so that your image stands out. Apple Watch users will now be able to send images, messages and Mails from the Watch itself. A new Find Items app will allow users to locate tagged items using the Find My network, and a new Find Devices app helps users locate lost Apple devices that are signed in with the same Apple ID. The Weather app on watch will show “Severe Weather notifications” that will include government alerts about severe weather events.

The new software update is compatible with Apple Watch Series 3 or later paired with iPhone 6s or later, running iOS 15.