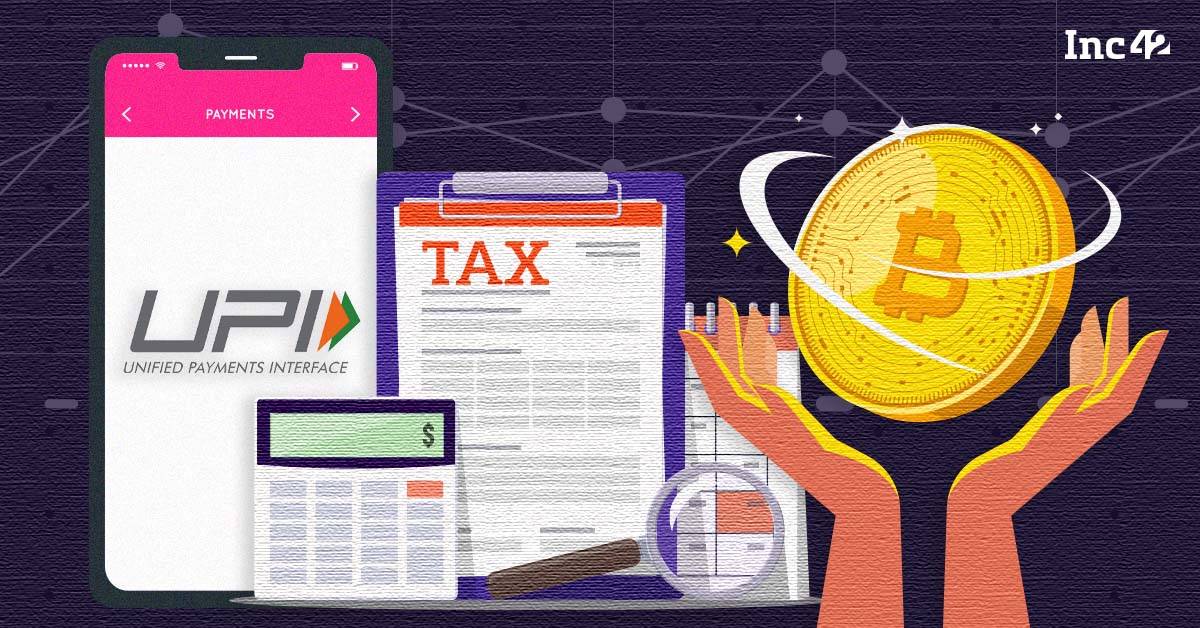 “There’s going to be a lot of conversations and dialogue with regulators, policymakers, bank partners and payment providers,” said Brian Armstrong, founder and CEO, Coinbase.

Last week, Armstrong was in Bengaluru to launch retail trading in India with a UPI payment feature. However, the company’s VP, Nana Murugesan, declined to reveal the name of its bank and payments partners in India, and, for obvious reasons. Right after the Coinbase India event in Bengaluru, the National Payments Corporation of India (NPCI), an organisation accountable for managing and controlling UPI payments in India, issued a statement highlighting that it is not aware of any crypto exchange using UPI.

“With reference to some recent media reports around the purchase of Cryptocurrencies using UPI, the National Payments Corporation of India would like to clarify that we are not aware of any crypto exchange using UPI,” NPCI said in a statement.

At the outset, many believed that this was an unnecessary and harmless statement by the NPCI. For crypto-industry insiders, “A storm was coming.”

Shivam Thakral, founder and CEO of BuyUCoin crypto exchange, said, “It was largely perceived as NPCI’s disapproval of the payments companies extending UPI facilities to us.”

The next day, Coinbase had to stop offering UPI payments (INR Deposits via UPI). On ‘Buy’ orders, it says, “Purchases with this payment method are temporarily unavailable.”

What’s more interesting is that unlike old times there has not been any formal circular or notice, neither by the RBI nor the NPCI, asking payment service providers (PSPs) or banks to refrain from extending their services.

It is worth noting that in 2021, when HDFC Bank, citing an old RBI notification, had warned its customers to not to indulge in crypto transactions using HDFC Bank account, else the bank would retract its services, the RBI had quickly issued a statement.

“It has come to our attention through media reports that certain banks/ regulated entities have cautioned their customers against dealing in virtual currencies by making a reference to the RBI circular DBR.No.BP.BC.104/08.13.102/2017-18 dated April 06, 2018. Such references to the above circular by banks/ regulated entities are not in order as this circular was set aside by the Hon’ble Supreme Court on March 04, 2020, in the matter of Writ Petition (Civil) No.528 of 2018 (Internet and Mobile Association of India v. Reserve Bank of India). As such, in view of the order of the Hon’ble Supreme Court, the circular is no longer valid from the date of the Supreme Court judgement, and therefore cannot be cited or quoted from,” the central bank had said.

Before we get into the details, let’s understand why UPI has been caught in the middle of all this.

Why UPI Matters The Most

Crypto is fully digital. There are only a handful of exchanges offering over-the-counter facilities.

In 2021, industry body BACC had estimated that India has approximately 15-20 Mn users who have so far invested over INR 40,000 Cr in crypto.

UPI payments, silently launched by most of the exchanges saw an exponential rise in terms of users as well as the volume of transactions. With zero MDR on UPI, users were able to buy crypto at cheaper prices and in smaller volumes. 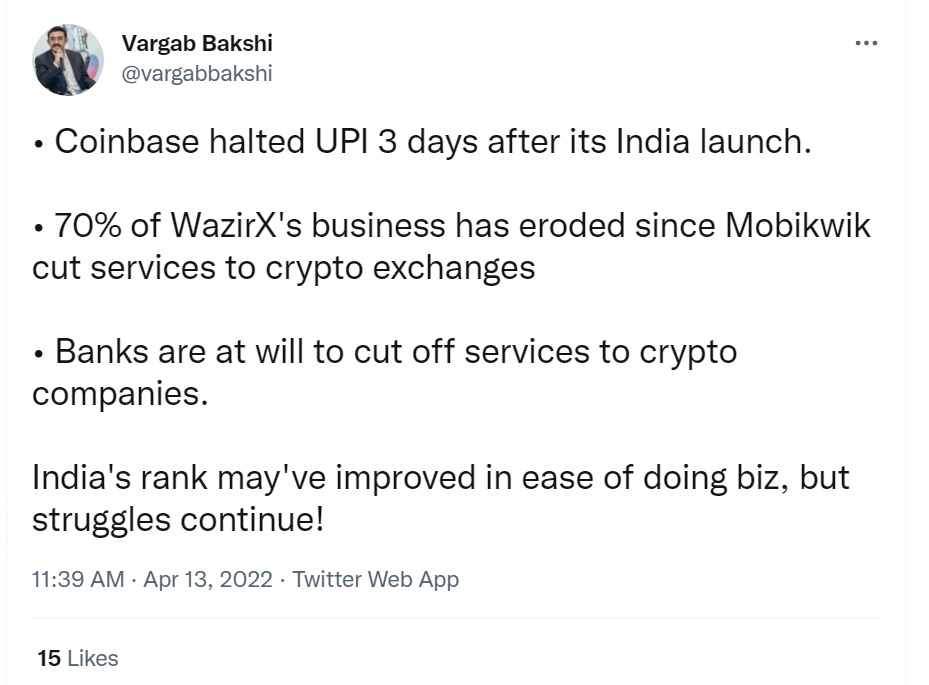 Why No UPI Payments For Indian Crypto Ecosystem

All these development have raised several questions and confusion amongst stakeholders, some of these include:

Both NPCI and Mobikwik declined to comment on the issue.

A Ministry of Finance official, on the condition of anonymity, told Inc42, “The idea is to limit the reach of crypto until the Crypto Bill gets enacted by the Parliament. This is not just the RBI’s view but I think the Indian government’s view too.”

Till 2019, the Indian government used to offer subsidies on UPI payments in order to help Indians digitise their payments. In December last year, Prime Minister Narendra Modi in a cabinet meeting approved an incentive scheme worth INR 1,300 Cr for 2022-23 to promote RuPay debit cards and low-value UPI transactions up to INR 2,000 by reimbursing the merchant discount rate, the official added.

According to the incentive scheme, the acquiring banks will be incentivised by the government by way of paying a percentage of value of RuPay Debit cards transactions (P2M) and low-value BHIM-UPI transactions (up to INR 2,000) (P2M), for a period of one year, w.e.f. April 01, 2021, at an estimated financial outlay of INR 1,300 Cr.

“A long term clarity can only be expected when we have a law in place,” the official said.

In the last 15 days, the volume of transactions on various leading exchanges have reduced by 50% to 70%, in comparison to pre-tax days. WazirX, which used to score $100 Mn+ on an average in pre-crypto tax days, is now producing daily transactions of around $30 Mn. 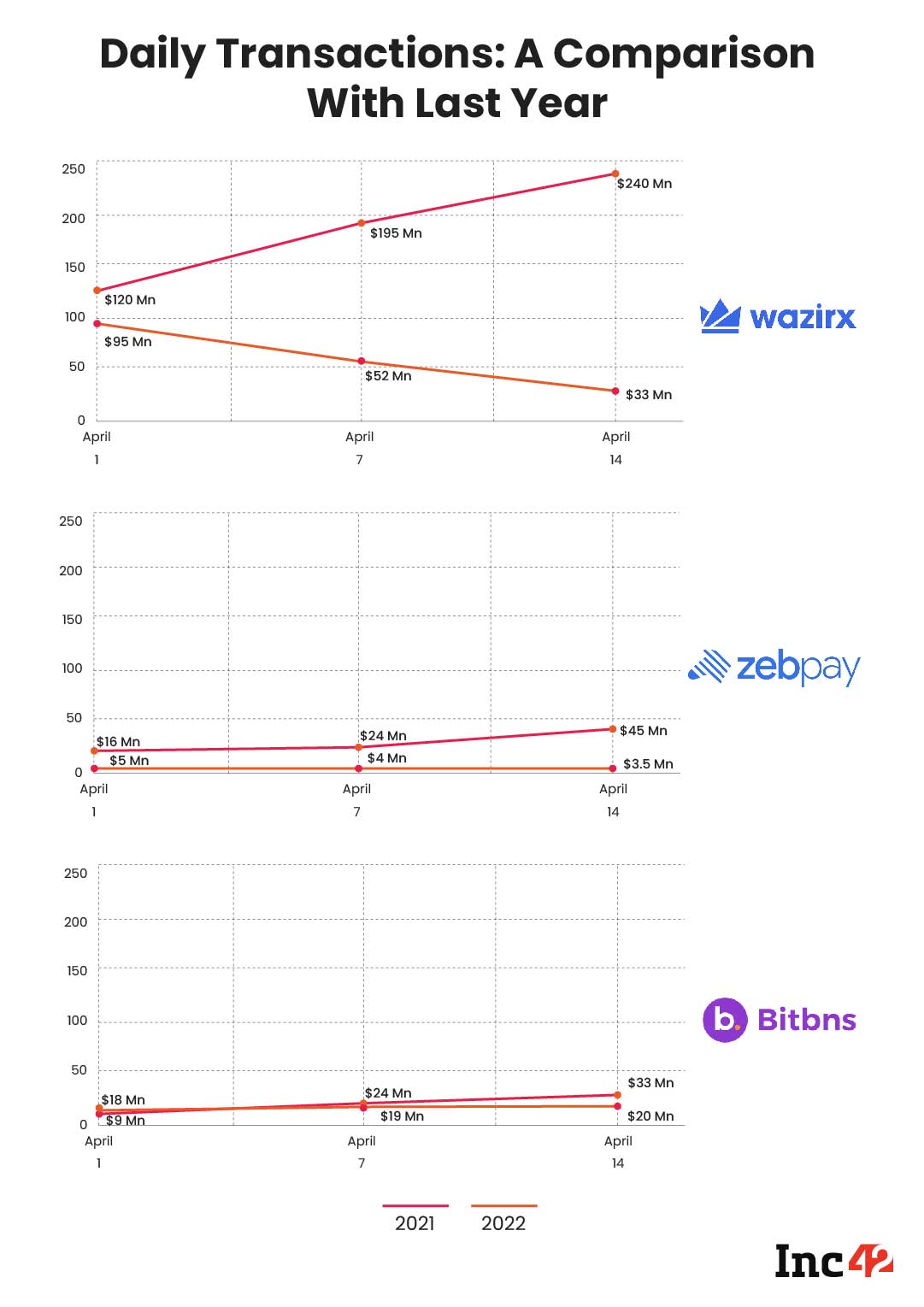 Most of the crypto exchanges have not yet incorporated the essential measures on their apps to implement 1% TDS.

Further, crypto exchanges are yet again facing a huge issue in terms of bank partners and payment gateways. While all the exchanges have already stopped UPI payments, bank transfers too have been a big issue for exchanges and their users. The list of bank partners offered by these exchanges, whether it is WazirX or Vauld, is very limited and users are facing huge difficulties.

If the situation remains the same, crypto exchanges will soon be facing 2018-2019 like situation which saw the closure of some of the major exchanges in India, including Koinex, Coindelta, Coinome, Throughbit, Cryptokart, and many more.

This Is How Much CBD You Should Give Your Dog