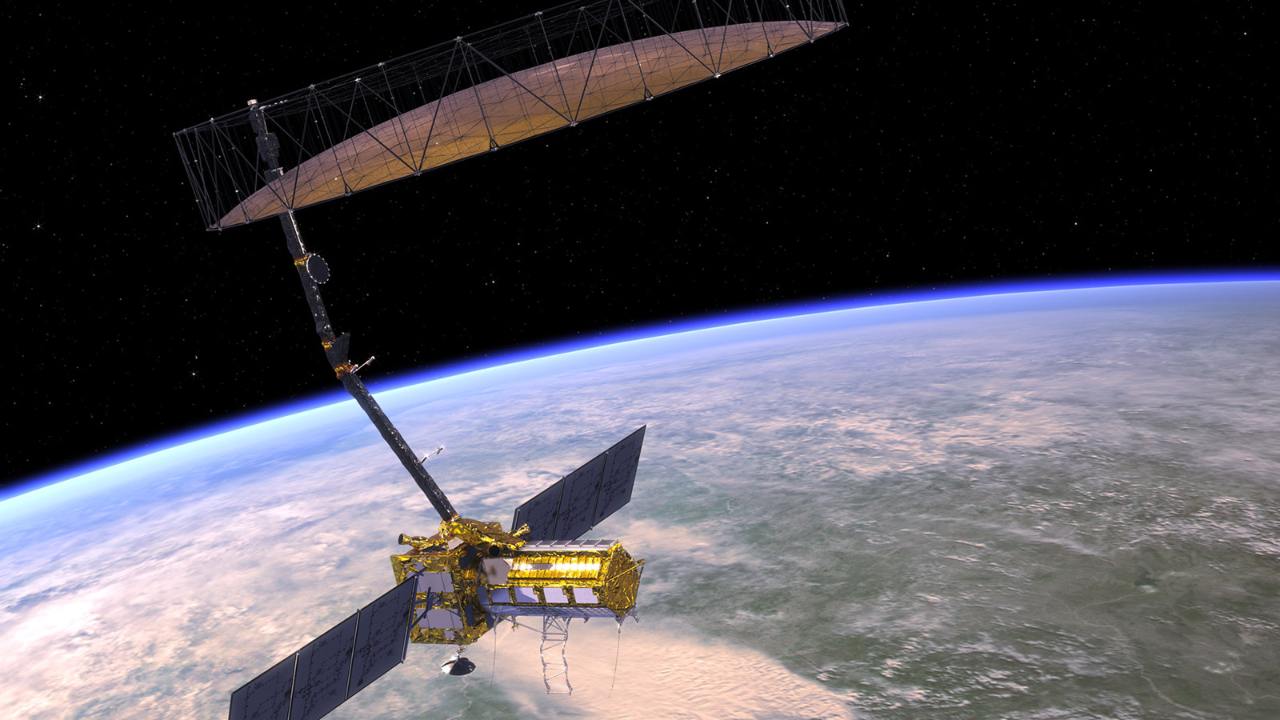 Seven years since it was first envisioned, a car-sized earth observation satellite is under development in a joint effort by the National Aeronautics and Space Administration (NASA) and the Indian Space Research Organisation (ISRO). Named NISAR, (NASA-ISRO Synthetic Aperture Radar), the satellite is scheduled to launch on a three- to five-year mission either in late-2022 or early-2023. ISRO’s chief said the satellite will be launched onboard a GSLV Mark-II rocket from Satish Dhawan Space Centre (SHAR), Sriharikota, and placed in a near-polar orbit. 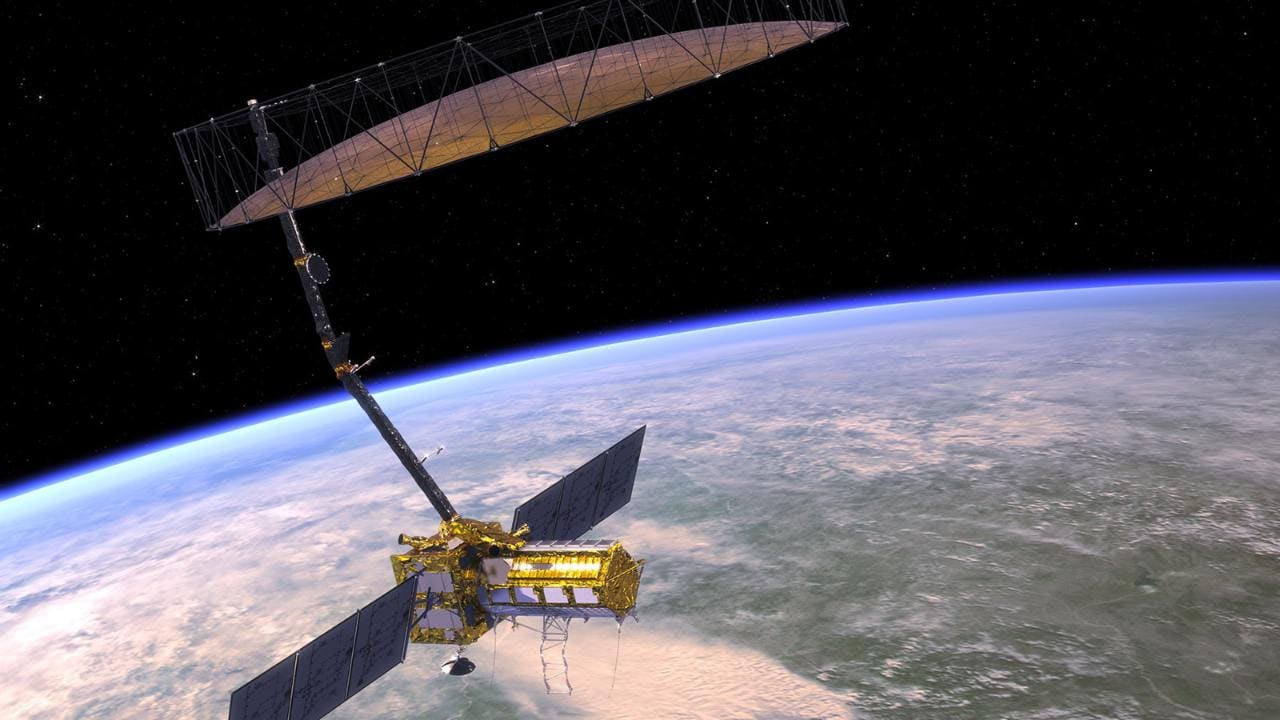 Illustration of the NISAR satellite co-developed by ISRO and NASA. Image credit: NASA

The Geosynchronous Satellite Launch Vehicle Mark-II (GSLV Mk II) is ISRO’s largest launch vehicle in use, at present. It is a three-stage vehicle with four liquid strap-ons. First launched in 2014, the GSLV MK II is a fourth-generation launch vehicle.

“NISAR is an all-weather satellite that’s going to give us an unprecedented ability to look at how the Earth’s surface is changing,” said Paul Rosen, NISAR project scientist at NASA Jet Propulsion Laboratory (JPL).

NISAR is an earth observation satellite that will help us understand the causes and consequences of changes taking place on land, using advanced radar imaging. It was born from the 2007 National Academy of Science ‘Decadal Survey’, which spoke about the importance of monitoring ecosystem disturbances, deformation of Earth’s crust and cryospheric sciences. The 2018 survey further confirmed the need for this type of satellite monitoring. With both agencies interested in similar areas, ISRO and NASA joined hands to make this satellite possible. They signed the contract on 30 September, 2014.

The mission length of the satellites for both space agencies are different because they have different science objectives with the radar bands. According to a NASA statement, the US space agency requires a ‘minimum of three years with the L-band radar’, while ISRO will use the S-band radar to study parts of India and the Southern Ocean for five years.

The main goals for the NISAR are two-fold – measure and track ecosystem and land-use changes, as well as melting ice. The measurements are used to help in forecasting and assessments.

India has specific issues it will monitor with NISAR such as the agricultural biomass over the country, disaster management, studying snow and glaciers in the Himalayas as well as India’s coastal areas and near-shore oceans.

Some other uses for this satellite include monitoring natural crises like earthquakes, tsunamis, landslides, volcanic eruptions and groundwater supplies; observe shifts in the distribution of vegetation, croplands and hazard sites.

Using onboard instruments, NISAR will be able to detect signs that indicate when too much underground water has been pumped out, or the movement of magma under the surface before a volcanic eruption. It will also be able to provide time-lapses of these events.

NISAR will be the first satellite to use two different radar frequencies – L-band and S-band.

ISRO will work on the S-band radar, the spacecraft bus, the launch vehicle (GSLV Mk II) and will also launch the satellite. NASA, on the other hand, will provide the L-band radar, communication subsystem for science data, GPS receivers, a solid-state recorder and payload data subsystem. The S-band SAR, one of two kinds of radar on the NISAR mission, arrived at JPL on 19 March. Credit: NASA/JPL-Caltech

Two kinds of synthetic aperture radar (SAR) will be used by the satellite to measure changes in the Earth’s surface. The communication link with Earth includes a wire mesh radar reflector antenna that is 12 metres in diameter, perched at the top of a nine-metre-long (30-ft-long) boom that pings and receive radar signals to and from Earth’s surface. This kind of satellite communication is quite similar to weather radars, which use signals bouncing off raindrops, to track storms.

The images from the satellite are supposed to be extremely detailed, and will be able to show the most minute changes locally, but will also be broad enough to measure regional changes.  NASA says NISAR will be able to detect movements on the planet’s surface as small as one centimetre over areas about the size of half a tennis court. By collating this data, it will help us understand the ’cause and consequence’ of all changes occurring the world over. This will further help us manage our resources better and adapt to the changes as well.

Both radars can ‘see’ through clouds and foliage, but the L-band can penetrate deeper into dense vegetation than the S-band. According to a NASA statement, the imaging swathe — the width of the strip of data collected along the length of the orbit track — is greater than 240 kilometres. This will allow the satellite to image the entire Earth in just 12 days.

NISAR is currently being assembled in a cleanroom at the US space agency’s JPL in Southern California. On 19 March, ISRO sent the S-band radar to NISAR’s assembly, test, and launch team at JPL in order for it to be attached to the satellite.  After assembly, the satellite will be sent back to India to prep it for its launch, which will be done at the UR Rao Space Centre, in Bengaluru.

Asus ROG Phone 5 with Snapdragon 888 SoC to be available for pre-order in India today at 12 pm on Flipkart- Technology News, FP

India is home to 13 of 20 cities most vulnerable to environmental hazards worldwide: Report- Technology News, FP