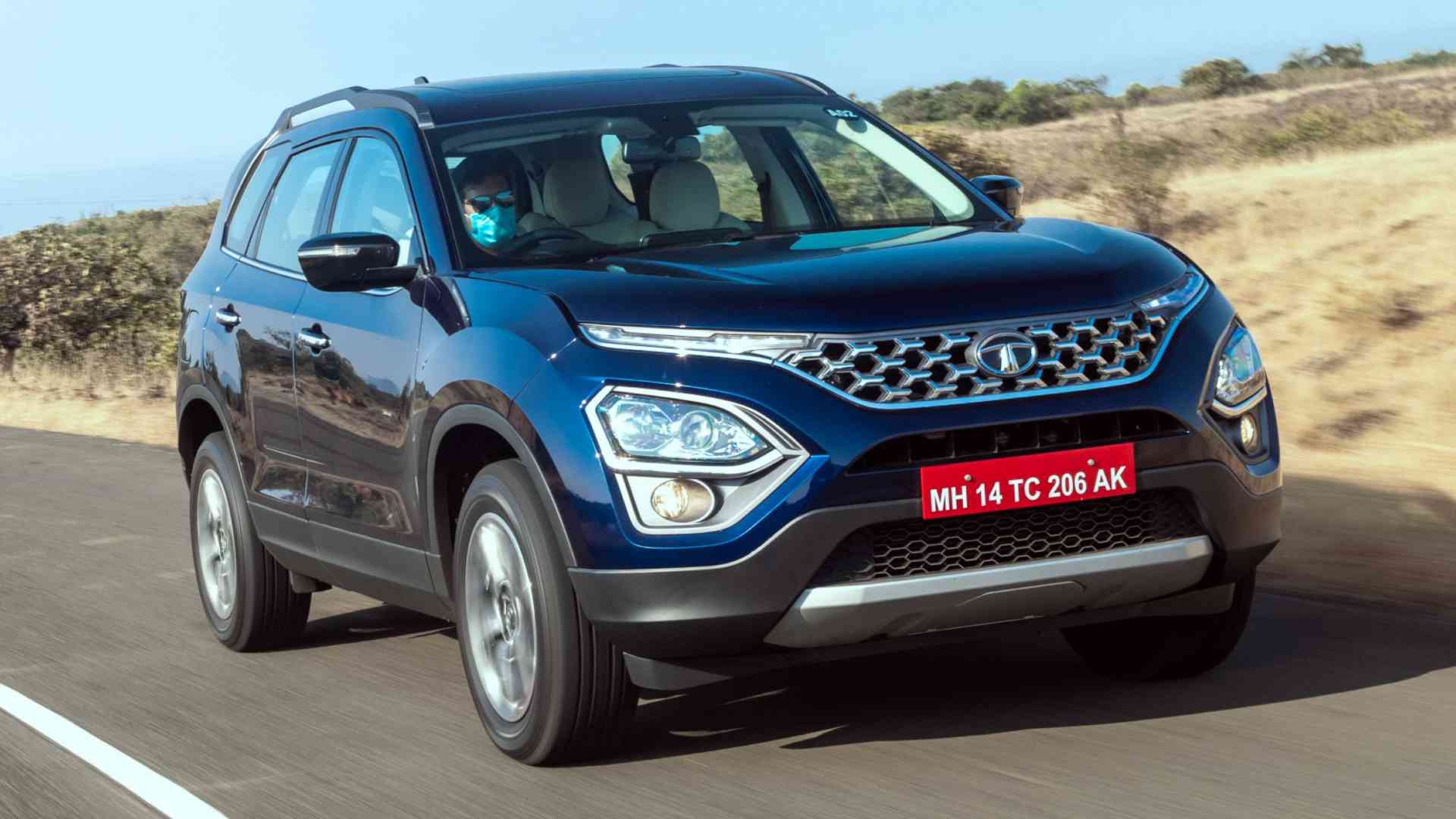 Just how many of your sweet memories of yesteryear are based on pure, irrational nostalgia? Rola-Cola? Sickly-sweet, weird, barely cola-like, but recent Instagram gold. Coolie No. 1 then: Whee! Coolie No. 1 now: WTF? Then: Zeher hai ke pyaar hai tera chumma? Now: Do you like eating mangoes?

So, here’s my unpopular opinion: I don’t see the draw of the old Tata Safari. And I have fond memories of my family Tata Sierra, so if anything, I might be biased. The Safari holds the distinction of being one of India’s early “true” SUVs with 4×4, a reasonable cabin for reasonable people and other such luxuries. But the last time I drove one (the Storme), my elbows sat at different levels, I was more sailing than driving and spent most of my time wondering that perhaps Tata Motors meant that 400Nm of claimed torque was shared across several vehicles.

The new Safari suffers from none of these shortcomings. How could it, being based on the very recent (for Tata Motors) Omega architecture, which traces its roots back to Land Rover? It’s a modern SUV competing in what is becoming an increasingly hot segment in the market. The new Tata Safari will be launched on February 22, 2021. Image: Overdrive/Anis Shaikh

The way Tata Motors says it, the new Safari was always going to be called that. In the period just before the 2020 Auto Expo till now, we knew it as the ‘Gravitas’. Thankfully, that remained on the shelf. The ‘new’ Safari is essentially a three-row Harrier with an automatic gearbox available right from the time of launch. 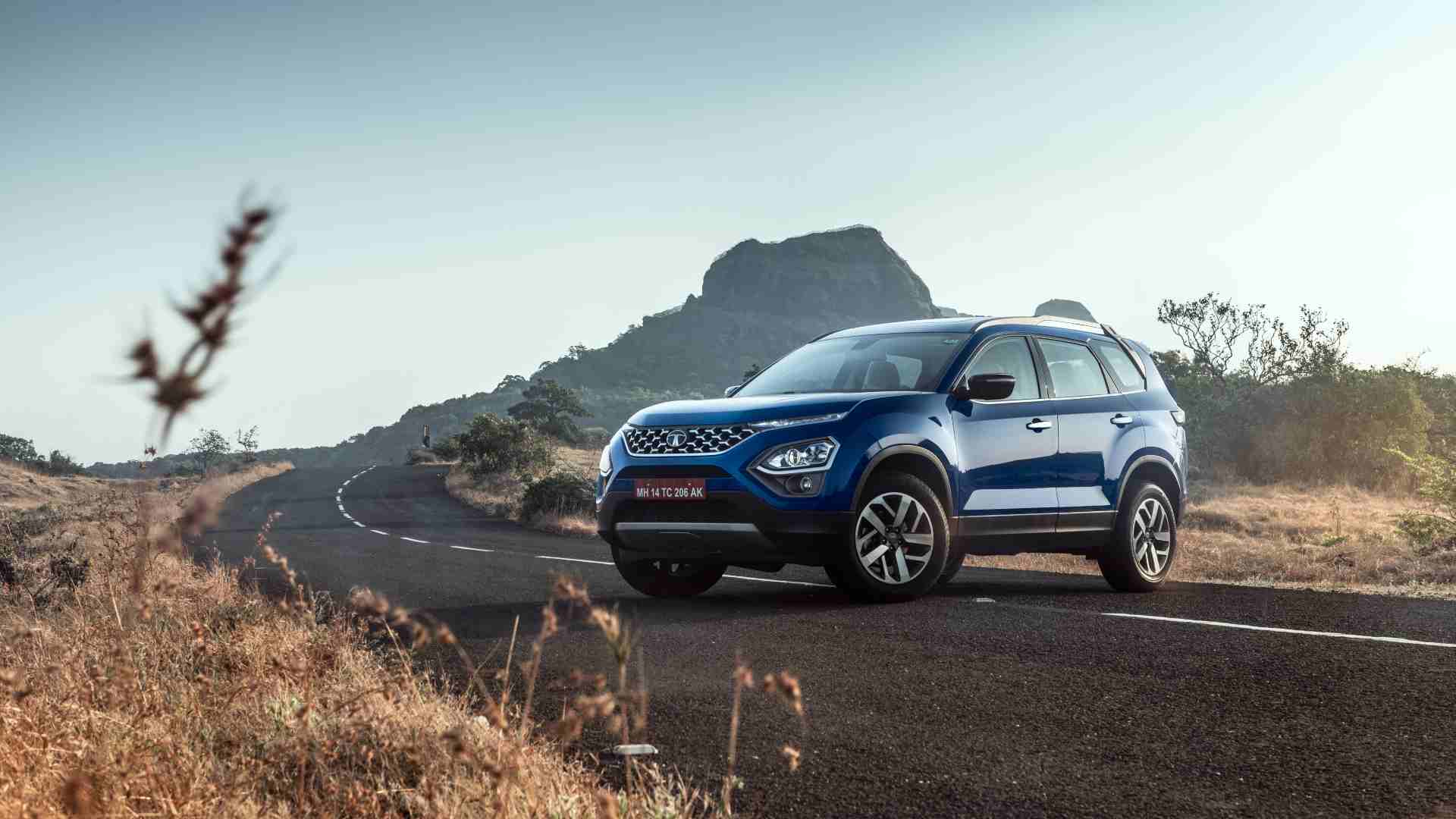 The Safari looks more mature than the Harrier it shares most of its basic design and mechanicals with. Image: Overdrive/Anis Shaikh

Judging by the way the communications folk lit up at my mention of the more ‘mature’ design language, it appears that the mission has been accomplished by the new Safari to a certain extent. Where the Tata Harrier felt like Pratap Bose, Head of Design walked into a meeting, threw the sketches on the table and said, “build exactly that, or else…”, the Safari looks like this time round, someone on the business side said, “you’ve had your fun, now let’s do some of it my way.”

The new Safari is clearly based on the 5-seat Harrier – much of the front looks similar, but the treatment aft of the C-pillar is quite different. There’s a higher roof, with the distinctive kink that the old Safari was known for. There’s a large quarter-glass for the third row with an interesting design element buttressing it from the roof rails, down to the body panel. To my eyes, it’s a smarter-looking vehicle than the Harrier; much less concept car-like. Our automatic test variant came in this fetching Royale Blue colour that looked elegant and premium.

The new Tata Safari gets the same iRA connected car suite that we saw recently in the Altroz iTurbo. It provides basic geofencing security features, as well as allowing one to activate the horn and the lights remotely. However, there is no remote engine start or climate control functionality like we’ve seen in some other cars recently.

The 8.8-inch touchscreen infotainment system is a wide-screen variant of what we’ve seen in the Nexon and Altroz, and as such, does not differentiate itself much. It is responsive, and worked with my Apple smartphone (CarPlay is available, but wired). However, my complaints with the UI remain. Simple toggles are confusing, because you have to hunt for tiny icons on the screen to figure out if they have been activated.

The JBL-branded music system is a carryover from the Harrier. It is bland to listen to unless you use the equaliser or one of its pre-sets. It also does not sync volume with the connected Bluetooth device, frustrating me on one occasion with the lack of music because my phone volume was set too low, and there was no way of knowing. With a couple of small changes, the Tata Safari’s interior feels more premium than the Harrier’s. Image: Overdrive/Anis Shaikh

Tata Motors continues to draw cues from corporate cousin Jaguar Land Rover, which is evident from the Safari’s interior. There’s a sweeping arc between the dash and the windshield, reminiscent of some Jaguars. Materials appear to be nice, with an airy colour scheme that looks more premium than the Harrier’s. I took particular note of the rough-looking stitches on the Harrier’s seats, which the Safari does not suffer from. Apart from the slightly lightweight plastic on the door panels, things feel solid.

The dashboard continues to follow Tata Motors’ recent design language, but does better in the Safari thanks to the nice, dark wood-finish panel running across the dash. The steel-grey strip below this panel, and the use of piano black is not to my preference. There are a reasonable number of buttons available; not too many or too few, and I appreciate the addition of an electronic parking brake, replacing the gimmicky aircraft-style throttle lever of the Harrier. Strangely, however, the parking brake does not have an LED indicator of its own, requiring you to look at the driver display to see whether it is engaged. The terrain response dial, too, has dim indicator LEDs, requiring you to look closely to see what mode is selected. On the other hand, the panoramic sunroof has the most obvious controls, with individual rockers for shade, vent and opening.

The driver binnacle is an area where there was an opportunity to differentiate the Safari from its stablemates. As a flagship vehicle, I’d have liked to see something more than I did in the Altroz. The Safari’s steering tilts and telescopes, and the motorised seat adjustment is a bonus, but I was somehow never able to find the perfect driving position, as was the case with the Harrier. It gets close, but is still not perfect. The centre armrest, as with the Harrier, continues to be useless. It’s too small, positioned too far back and is not adjustable.

Since the Safari is a three-row SUV, it is available in 6- and 7-seat variants, differing by the two captain seats or a bench seat in the second row, respectively. In 6-seat configuration, access to the third row is by way of the aisle between the two captain seats. In the 7-seat variant, the second row is a bench that splits 60:40, folds and tumbles, allowing for kerbside access to the third row. Not only is this much more convenient for passengers, but also frees up a lot more cargo space with the second and third rows folded. The captain seats of the 6-seat model do not fold much at all, limiting cargo room. The third row of the Tata Safari is a comfortable-enough place to be. Image: Overdrive/Anis Shaikh

And finally, the third row: The Safari may well be a benchmark for comfort in this part of the car. Passengers sit quite comfortably, with legs in a reasonable position (knees not touching their ears like in some other vehicles) and with some kneeroom to speak of. There’s even decent headroom, thanks to the tall roof. There are adjustable AC vents, a nice view with the large quarter glass panels, and two charging ports as well. However, it would have been nice if the ports were on either side instead of just on the left.

With the updated 170hp/350Nm spec of the 2.0-litre Kryotec diesel engine, the new Safari is a darn side better to drive than the original Harrier. In fact, apart from the moderate engine noise, the Safari feels just as swift and effortless to drive as any other SUV of this type – India-made or imported. On the automatic variant, the Hyundai-sourced torque converter automatic gearbox is smooth and seamless, and just a great match for this engine.

There are drive modes on offer, with Eco, City and Sport being your choices. I found the Safari to respond best in Sport mode, with no compromise in smoothness, so I left it there. Modern turbocharged engines are adept at making big torque numbers from relatively small displacements, so the 350Nm is not winning spec-sheet comparisons. However, applied well with this gearbox, it doesn’t matter. Compare this powertrain combo with Tata’s own Varicor 400 and auto ‘box in the Hexa, and the difference in feel is stark. Triple-digit cruising is easy, and there’s plenty of poke to overtake safely at highway speeds. It stays flat over most surfaces, but the new Safari’s ride quality is a bit harsh on concrete roads. Image: Overdrive/Anis Shaikh

Tata Motors has tweaked the suspension on the Safari to make it more compliant than the Harrier. At least, that is the claim. I found the suspension to be tuned to remain flatter in most conditions, possibly by changing the damping. To me, the ride quality on concrete roads and over sharp joints was a bit harsh, as I’m used to with European cars. Sure, the Safari will respond well around the bends, but frankly, in most of our conditions, I’d take a bit more wallow if it meant the setup was a little less crashy.

Towards the end of my time with the Safari, I was less interested in driving the manual, since the automatic seemed to meet my expectations. However, I’m glad I gave it a go. The manual version saves about 60-70kg in weight, according to Tata Motors, and this is evident when driving. The manual shifter is not the nicest to row, but the SUV seems to respond better thanks to the lighter weight. If I were to buy a Safari only for highway jaunts, I might consider saving some money with the manual option. It’s nice to drive. 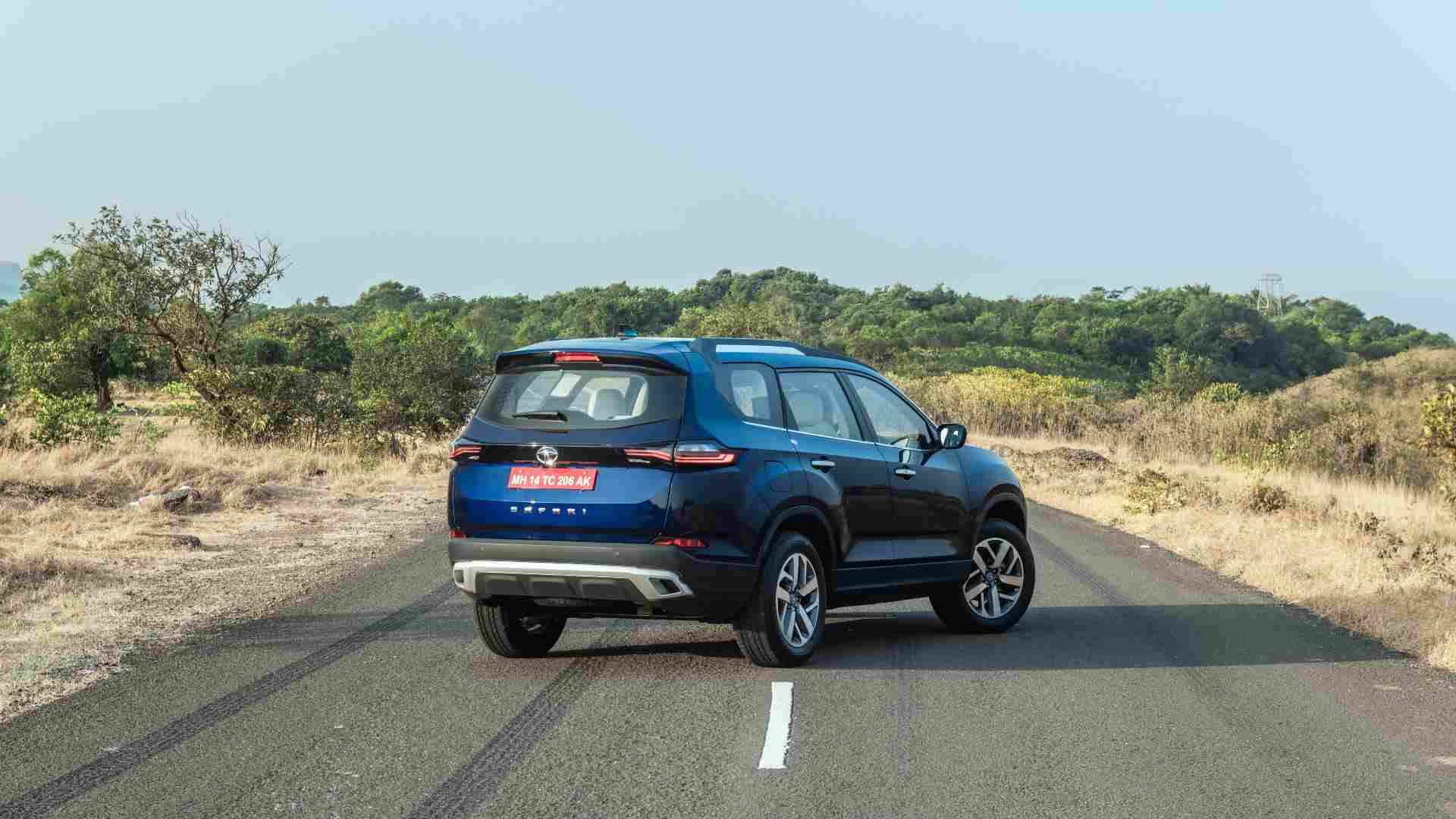 The new Tata Safari’s price is expected to be in the range of Rs 15.5 – 22 lakh (ex-showroom). Image: Overdrive/Anis Shaikh

Should you buy the new Tata Safari?

The lack of 4×4 appears to be a deal-breaker for many Safari faithful, rendering the new one a soft-roader at best. However, the terrain response system will take you to more places than you might think – just not where locking diffs would be needed. Tata Motors has made clear that the architecture of the Safari can easily accommodate a 4×4 system if market conditions are feasible for the expense, so if that’s the only thing stopping you from buying a Safari, wait. Even the Harrier had no auto ‘box, until it finally did.

The new Tata Safari is a solid contender in its price bracket, which as yet remains unconfirmed. We would expect a Rs 1 – 1.5 lakh premium over the Harrier, putting it in the Rs 15.5 – 22 lakh bracket (ex-showroom). Competition is formidable, with the likes of the MG Hector Plus and Mahindra XUV500 in the running, and an all-new XUV500 due in the coming months. Where the Safari scores is on third row comfort, unique design and the Tata Motors network.

Birds of prey are threatened with global decline due to habitat loss and poisons find ICUN- Technology News, FP

How much does the full-blown Maybach experience cost?- Technology News, FP

All you need to know about new three-row crossover- Technology News, FP

An aerospace engineer explains what is a suborbital flight and why they matter?- Technology News, FP