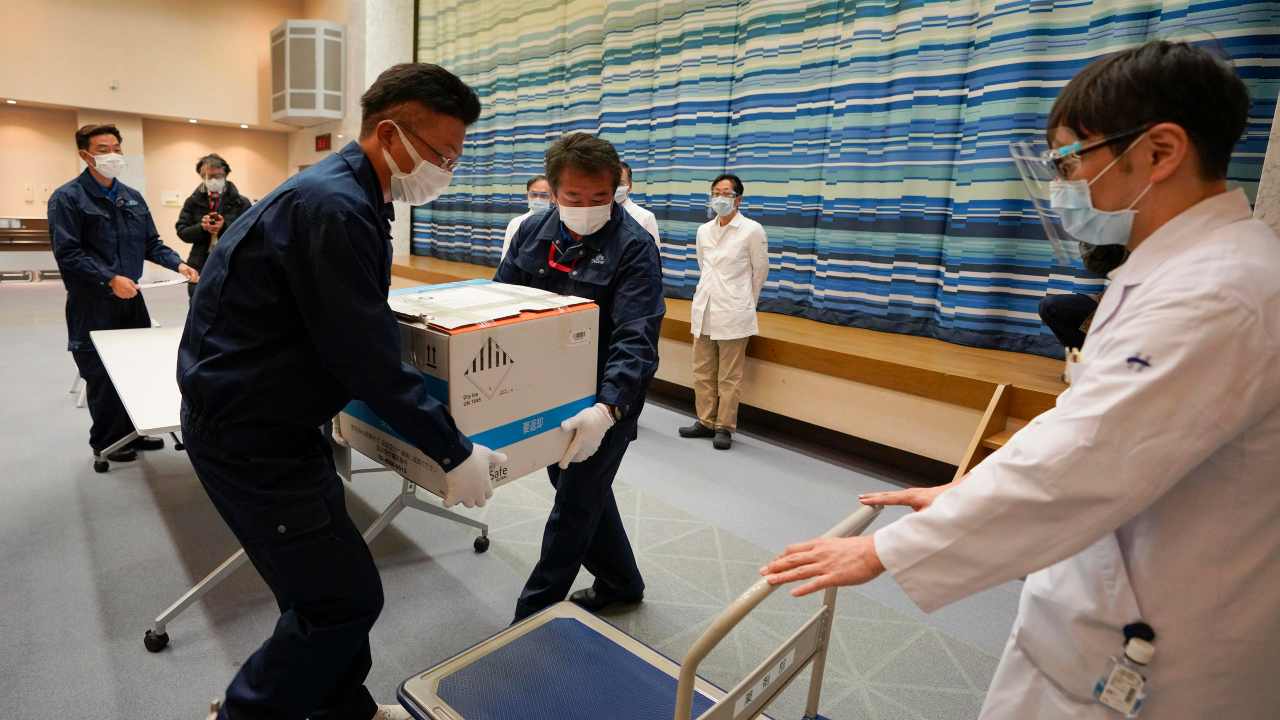 It may be June before ordinary people have their turn, so the Olympic would be impossible to hold before July. Staff move a box of Pfizer’s COVID-19 vaccine on a carriage at a Tokyo hospital on 16 Feb. Japan’s COVID-19 vaccinations are scheduled to begin Wednesday after the government granted belated first approval to a shot co-developed by Pfizer Inc. Image: Kimimasa Mayama/AP

shots were given to health workers Wednesday, beginning a vaccination campaign considered crucial to holding the already delayed Tokyo Olympics. The progress the campaign might make is uncertain, however, in a country concerned about possible shortages of imported vaccines and where people are often reluctant to take vaccines due to worries of side effects. The massive drive comes after the government gave its belated first approval Sunday for shots developed and supplied by Pfizer, which have been used in many other countries since December.

Japan fell behind after it asked Pfizer to conduct clinical tests with Japanese people in addition to the company’s earlier tests in six other nations. But officials say it was necessary to address the concerns of many Japanese about safety in a country known for low vaccine confidence.

Some of 40,000 doctors and nurses from 100 selected hospitals across the country received their first shots Wednesday, with their second shot planned for March 10. Half will participate in a 7-week health survey.

After weeks of delay, Japan’s inoculation program is running on a tight schedule.

Vaccines arrived in a Tokyo hospital late Tuesday, the night before inoculations for its staff started Wednesday morning.

A first shipment of the Pfizer vaccine that arrived last Friday is enough for 40,000 doctors and nurses from 100 selected hospitals across the country, Kono said.

Inoculations of 3.7 million more health workers will begin in March, followed by about 36 million people aged 65 and older starting in April. People with underlying health issues, as well as caregivers at nursing homes and other facilities, will be next, before the general population receives its turn.

It will be around June by the time ordinary people have their turn, and reaching a so-called “herd immunity” against the virus before the Olympic would be impossible, experts say.

The 2020 Tokyo Olympics are to begin in July.

Japan’s mistrust of vaccines is decades old. Many people have a vague unease about vaccines, partly because their side effects have often been played up.

Half of the recipients of the first shots will keep daily records of their condition for seven weeks, data that will be used in a health study meant to inform people worried about the side effects.