At the Safer with Google India event, Google shed light on some of the steps it has taken to ensure those using its services can continue to do so with minimal risk of being troubled by cybercriminals. At the event, Google brought up the JioPhone Next, a budget smartphone developed in collaboration with Reliance Jio that’s set to be launched in September, and also introduced its Safety Center with support for multiple Indian languages as well as the ‘Be Internet Awesome’ microsite to educate children about the threats they may face online.

JioPhone Next to get latest Android releases, security updates

First announced at the Reliance AGM in June, the JioPhone Next will go on sale starting 10 September, and is billed as an ‘ultra-affordable 4G smartphone’. During the announcement, Reliance chairman Mukesh Ambani had said the smartphone will be “amongst the most affordable smartphones not just in India, but even globally”. 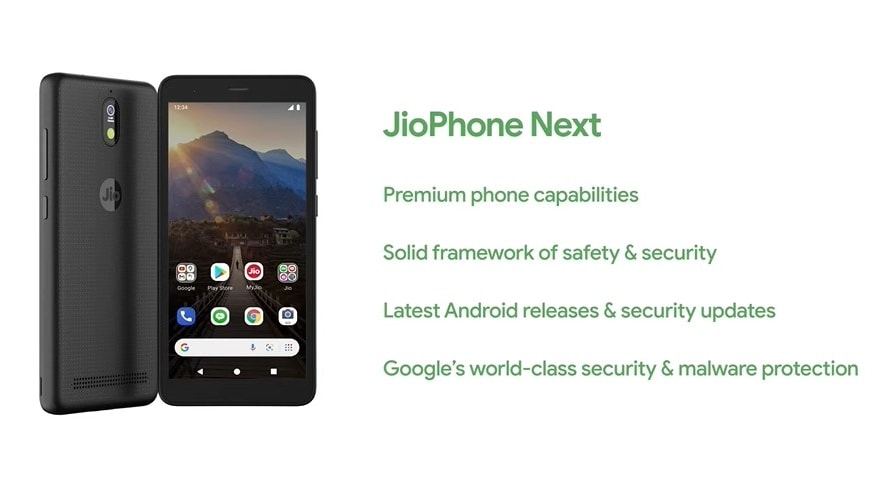 The JioPhone will receive the latest security updates from Google. Image: Google

During today’s Safer with Google India event, Sameer Samat, VP – Android and Play at Google, said that while the JioPhone Next’s affordability will make it widely accessible, privacy and security will be key to securing the trust of scores of buyers who will be owning and using a smartphone for the very first time.

Samat mentioned the JioPhone Next will have the capabilities of a premium smartphone, but will also have an enhanced focus on user security, as it will receive the latest Android software releases and security updates, and feature malware protection.

“These capabilities are going to be a first for any device in this category”, added Samat.
Google CEO Sundar Pichai has also previously confirmed the JioPhone Next will have language and translation features as well as “a great camera”.

With the number of children logging onto their computers spiralling during the COVID-19 pandemic, they’re also left vulnerable to several threats online. To educate them about these threats and help them identify potentially troublesome encounters, Google has introduced a microsite named ‘Be Internet Awesome’. ‘Interland’ game on Be Internet Awesome microsite aims to inform children about online threats in a fun way. Image: Google

This site features quick pointers on dangers kids need to look out for online, handy security guides for families and educators as well as ‘Interland’, an interactive game that teaches children the importance of aspects like setting a strong password, dealing with malicious emails and more.

Google has also rolled out a comprehensive update for its Google Safety Center microsite, which now offers users in India a choice of five languages – Hindi, Marathi, Kannada, Malayalam and Telugu. Support for three more local languages will be added towards the end of 2021.

The updated Google Safety Center will be accessible in eight local languages by the end of 2021. Image: Google

The Google Safety Center is essentially a one-stop guide for users to be able to learn about the safety measures in place for every Google app and service, and also lets users customise their privacy and security settings for the same.