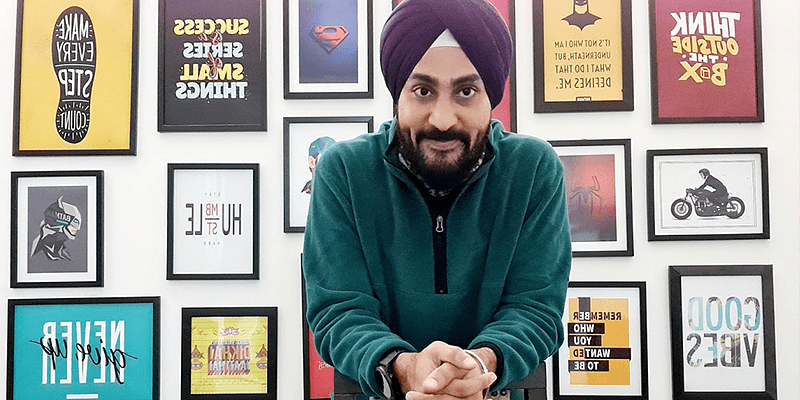 Jasmeet Singh, 37, had not even reached adulthood when he joined MakeMyTrip, one of India’s early internet successes. But at that time it was just an unknown startup by an unknown 30-year-old entrepreneur, Deep Kalra. The Gurugram startup would go on to become India’s largest travel booking company, and Deep, a poster boy for the online travel industry.

MakeMyTrip was officially founded at the turn of the millennium, in April 2000 to be precise; Jasmeet joined the company the same month, as a 17-year-old intern, tasked with doing data entries.

It was supposed to be a part-time gig for him lasting 3-4 months before he went to college. But fate had other plans and Jassi (as he’s popularly known) never left. Twenty years later, he is a Senior Vice President at the Nasdaq-listed company.

He was able to do all of this with his own money and he credits MakeMyTrip and its restricted stock units (RSU) policy for making it all possible.

“We are one of the few organisations where employees can create wealth from RSUs, apart from their annual earnings. Stockholders can encash their RSUs anytime post vesting without any wait for buyback, etc.,” says Yuvaraj Srivastava, Group Chief Human Resource Officer at MakeMyTrip.

The Gurugram startup’s stock programs are designed for employees above director levels and for select employees till Associate Director level or below. Directors and above are offered a four-year plan, where stocks are divided into Restricted Stock Units (RSUs) and Public Sector Undertakings (PSUs). “75 per cent of the stocks are RSUs that are vested equally over a period of four years and the rest are bucketed under PSUs and are vested for three years. Associate Directors and below are offered a four-year-program where 10 per cent of the stocks are vested in the first year, 20 per cent in the second year, 30 per cent in the third year and the 40 per cent in the fourth year,” Yuvaraj adds.

In terms of the allocation, stocks are granted to all employees at senior management levels, while mid-management roles are allotted shares based on performance. Law firm LinkiLaw Solicitors explains stock vesting as the process by which an employee, investor, or co-founder is rewarded with shares or stock options but receives the full rights to them over a set period of time or, in some cases, after a specific milestone is hit.

Jassi grew up in New Delhi’s Lajpat Nagar neighbourhood in a middle class household. During the summer break post his Class 12 board exams, Jassi enrolled himself in a six-month diploma course at the Training Institute for Travel Trade.

At that time, MakeMyTrip was just taking shape and reaching out to ‘travel schools’ to recruit database entry personnel.

“There were no APIs (application programming interfaces) back then. Each itinerary had to be manually fed into the system. They were looking for people who would know three-letter IATA (International Air Transport Association) codes,” Jassi shares.

He was making Rs 4,000 for a part-time job, which, for a teenager back in 2000, seemed like “a lot of money.” Jassi wanted to stay on, despite pressure from his family to start with college.

“I thought this was a lottery. We used to work late night, through the night. I moved to ‘hotels database’ for another three months. After six months, I said there is no way I will leave this job,” he laughs, as he relives those teen memories.

After about a year as a database operator, Jassi moved to sales, almost by accident, when he filled in for a seller who called in sick. He made his first sale that very night; soon he was among the top sellers in the company, becoming a supervisor and then a team leader.

Although he was doing well at his job and being recognised for the same, pressure from his family was mounting on him to get a college education. “My parents were freaking out.” But Jassi wasn’t willing to give up his job in order to go to college. So in 2002, he decided to enrol for a distance-learning Bachelor of Business Administration (BBA) at the Annamalai University, finishing it in four years.

“The job satisfaction was great and I wanted to focus (on the job). I managed to convince my parents.”

Over the last two decades, Jassi would navigate various roles, in both sales and post-sales, until he took up entrepreneurial roles at MakeMyTrip, that involved juggling operations and business development for certain verticals. He was entrusted with looking after the alternative accommodations (similar to Airbnb) business at MakeMyTrip, before it was merged with GoIbibo. The Gurugram startup acquired rival GoIbibo in 2016.

Despite his fascinating journey and rise to Senior Vice President from intern, Jassi admits that there were years when he felt stuck in a certain role or designation. “But it’s all part and parcel of a journey, and perseverance is important,” he says.

In his latest role, which he took on last year, Jassi is responsible for sales across channels and customer experience for the holidays business at MakeMyTrip.

Indian startups still have a lot to catch up on when it comes to rolling out stocks for all; most US startups offer ESOPs (employee’s stock ownership plans) across the board. To be sure, a number of companies from India’s startup ecosystem are now starting to come forward in rolling out stocks for all. Online payment startup PhonePe, for instance, recently announced a $200 million plan to allot stocks to all its 2,200 employees.

One of the early adopters of the stocks-for-all policy in India was California and New Delhi-based slide sharing startup, Slideshare, which was acquired by LinkedIn in 2012 for $119 million.

Launched in 2006, at a time when the term ‘startup’ was still not as familiar in India, Slideshare had decided from day 1 that “everyone in the company” should have stock options.

Former Flipkart senior executive Satheesh KV, who led the ESOP policy at the ecommerce giant, points out that stocks are a great tool to not only attract top talent, but retain them as well. Satheesh, who is now Co-founder and COO (chief operating officer) at HR tech startup Spottabl, believes that the contribution of an ESOP liquidity programme to the startup ecosystem is extremely powerful.

“It is a key tool and a great opportunity for startup employees to create wealth,” he says. Flipkart has spawned over 200 entrepreneurs through its ESOP liquidity events over the years.

Satheesh also highlights that ESOPs go a long way in attracting talent from large established organisations into startups, especially “since these paper monies unlike earlier time are real [sic].”

LetsVenture Director, Ganesh Nayak, is on the same page as Satheesh. He says, “Employees who give years of their career to a startup, play an important role in the company creation process. Only with equity ownership, employees are truly able to relate to the risk and reward of entrepreneurship. For the best talent, salary is commoditised; companies need to offer equity to attract and retain them.” LetsVenture is a Bengaluru-based startup funding platform.

Jassi received his first set of ESOPs in 2004-05. He admits he “didn’t understand much” beyond the fact that “when it becomes shares, will get money [sic].” From an employee’s perspective, ClearTax explains ESOPs as a policy where an employee gets the benefit of acquiring the shares of the company at the nominal rate, and sells them (after a defined tenure set by his employer) and makes a profit.

“When the liquidation happens you realise that suddenly you have got a lot of money. You see a burst in your bank account to the tune of lakhs of rupees,” Jassi shares.

MakeMyTrip listed on the New York City-based Nasdaq stock market in 2010; Jassi was part of the group that travelled to New York for the listing ceremony. Post the listing, the travel booking company started hiring from top business schools.

“You have that thing in your head- ‘how do you compete (with these B-school grads)?’ I told myself, I need to be a step ahead, spend extra hours and my understanding of the subject should be better (than anyone else) [sic],” Jassi shares candidly.

Founder Deep Kalra is known to often say at company town halls that MakeMytrip is not fascinated by degrees. Jassi is clearly a living testimony to that claim.

Flipkart signs MoU with IIT-Delhi for research in social commerce

How Indian startups are scaling up to next level of growth