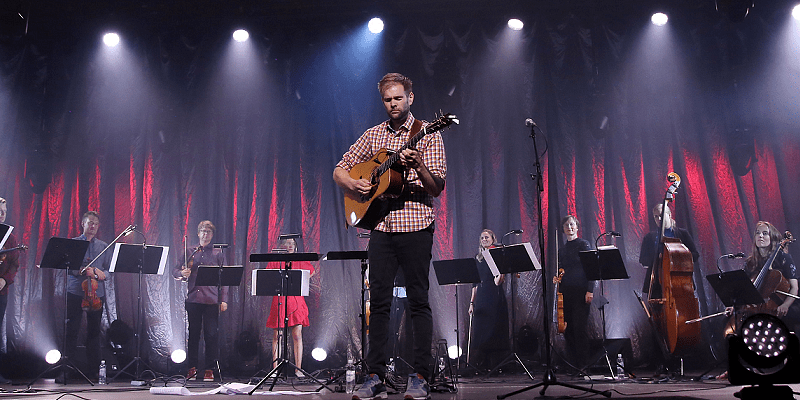 Due to pandemic restrictions, Norway’s annual Førde Festival of Traditional and World Music held a scaled-down live version last month. See Part I of my photo essay, and coverage of the 2016 edition.

In this photo essay series, we feature pictorial highlights along with insights from five performing bands. Only artistes based in Norway were invited, for a limited audience.

Many performers have not been on stage for over a year. “Fortunately, they had some happy days in Førde. We are so happy to be able to give them this opportunity. We gathered together the music family,” Torill Faleide, Festival Communication Manager, explains in a chat with YS.

“I first met and performed with saxophonist Kristin Sevaldsen 20 years ago. We were part of a group called Women’s Voices,” recalls Sibusisiwe ‘Busi’ Ncube, a singer-performer from Zimbabwe.

The rest of her band members met up in Oslo, and have been together for nearly 10 years. “Unfortunately one of our members, Dag Pierre couldn’t make it to the festival because of the COVID travel restrictions from Sweden to Norway,” Busi laments.

Multi-instrumentalist Ole Andre Farstad, leader of the band Meelodi, says he has been to India several times in the last 20 years. “In 2000, I studied the sarod with Amit Bhattacharya from the Maihar gharana,” he recalls.

“As recently as December 2019, I studied the siddha veena with Siddhartha Bannerje, and we also played a concert in Gandhinagar. We are planning to collaborate more in the future after the pandemic times,” Ole says.

His group Meloodi is planning for concerts in the fall, and doing some appearances on Norwegian national TV. “The plan is to go into the studio in December to record a new album,” he adds.

“We want to share with the audience the physical experience of musicality with dance,” explains Sigurd Johan Heide, choreographer of dance troupe Kartellet (‘The Cartel’). Their folk dance performances offer public participation as well, which changes from time to time.

“We even made a dance film in the snow, with one take of 43 minutes,” Sigurd recalls.

One of the cross-cultural groups at Forde Festivalen was Project RIID, featuring Almir Meskovic (Bosnia and Herzegovina) on accordion, Daniel Lazar (Romania/Serbia) on violin, and Ingrid Jasmin Vogt (Norway) on vocals, with Bellali Austria (Mexico) as the dancer.

“Bellali and I were two of the few artistes who worked in the field of flamenco in the Nordic countries,” Ingrid explains. The four performers realised they had an artistic chemistry that they all wanted to explore further.

“So the four of us created the project RIID, where we bring together Balkan and flamenco music and dance,” Ingrid says.

One of the tunes they perform is a farruca. “It is a style within flamenco music and dance. For a long time, it was forbidden for women to perform this dance, it was considered a man’s dance,” she explains.

“We chose to include the farruca in our repertoire to symbolise how we relate to tradition – not all rules are worth maintaining in the name of tradition. Sometimes rules need to be broken for people and art to progress,” Ingrid emphasies.

The theme of this year’s Forde Festivalen was heime or home. “That’s exactly how we felt. We went from the festival really content, grateful and filled with good energy,” she enthuses.

Music duo Sarah-Jane Summers and Juhani Silvola also played at the festival this year. “Juhani and I met in 2008 at a folk music festival in Norway. We have been performing together for over 10 years now, and have been married for several years,” Sarah-Jane explains.

They performed with Sølvstrøk, a chamber music orchestra they created especially for the occasion. “We wrote new music and arranged traditional music for the chamber orchestra,” she says.

“One of the traditional pieces we arranged is called Well May Charlie Wear The Crown. It’s a highly political Scottish piece, reflecting on the fact that there has not been a Scottish royal family since England and Scotland formed a union,” Sarah-Jane explains.

The duo is working on a number of music projects. “Juhani is going to be away touring a lot this autumn with Nils Petter Molvær, a famous Norwegian jazz trumpet player. I am about to record a new album of solo improvisation and contemporary music, to be called Pentimento,” Sarah-Jane signs off.

Now, what have you done today to pause in your busy schedule and find new avenues for your creative core?

See also the YS pocketbook ‘Proverbs and Quotes for Entrepreneurs: A World of Inspiration for Startups,’ accessible as apps for Apple and Android devices.

(All images by Førde Festivalen)

After starting to trade on the Oslo Stock Exchange, Softbank-backed Kahoot acquires Motimate; here’s why

WHO classifies Indian COVID-19 strain as ‘variant of concern’

India Tanks Global Privacy Test, But Are Users The Only One To Blame?