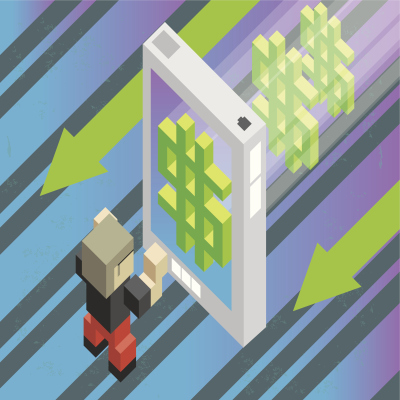 And those purchases aren’t exclusive to luxuries such as Pelotons (ahem, Affirm) or jewelry someone might be treating themselves to online. A new fintech company is out to help consumers finance big-ticket items that are considered more “must have” than “nice to have.” And it’s just raised $14 million in Series A funding to help it advance on that goal.

Neal Desai (former CFO of Octane Lending) and James Schuler (who participated in Y Combinator’s accelerator program as a high schooler) founded New York City-based Kafene in July 2019. The pair’s goal is to promote financial inclusion by meeting the needs of what it describes as the “consumers that are left behind by traditional lenders.”

More specifically, Kafene is focused on helping consumers with credit scores below 650 purchase retail items such as furniture, appliances and electronics with its buy now, pay later (BNPL) model. Consider it an “Affirm for the subprime,” says Desai.

“Historically, if you could access credit, you could go to the bank or use a credit card,” Third Prime’s Wes Barton told TC. “But if you had some unexpected expense, and had to miss a payment with the bank, there would be repercussions and you could fall into a debt trap.”

Kafene’s “flexible ownership” model is designed to not let that happen to a consumer. If for some reason, someone has to forfeit on a payment, Kafene comes to pick up the item and the customer is no longer under obligation to pay for it moving forward.

The way it works is that Kafene buys the product from a merchant on a consumers’ behalf and rents it back to them over 12 months. If they make all payments, they own the item. If they make them earlier, they get a “significant” discount, and if they can’t, Kafene reclaims the item and takes the loan loss. 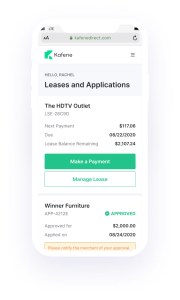 “This is also a superior product to credit cards, and the size of that market is massive,” Barton said. “We want to take a huge chunk of credit card business in time, and give consumers the flexibility to quit at any point in time, and fly free, if you will.”

Such flexibility, Kafene claims, helps promote financial inclusion by giving a wider range of consumers options to alternative forms of credit at the point of sale.

It also helps people boost their credit scores, according to Desai, because if they buy out of the loan earlier than the 12-month term, their credit score goes up because Kafene reports them as a positive payer.

“In any situation where they don’t steal the item, their credit score improves,” he said. “Even if they end up returning it because they can’t afford it. In the long run, they can have a better credit score to qualify for a traditional loan product.”

Kafene rolled out a beta of its financing product in December of 2019 and then had to pause in March due to the COVID-19 pandemic. The company essentially “hibernated” from March to June 2020 and re-launched out of beta last July.

By October, Kafene stopped all enrollment with merchants because it had more demand that it could handle — largely fueled by more people being financially strained due to the COVID-19 pandemic. In March 2021, the company was handling about $2 million a month in merchandise volume.

With its new capital, Kafene plans to significantly scale its existing lease-to-own financing business nationally, as well as to launch a direct-to-consumer virtual lease card.

How to deal with criticism

Your startup is your sculpture, says Sanjay Swamy of Prime Venture Partners

eCommerce Industry is Getting Saturated so you have to Stand Out