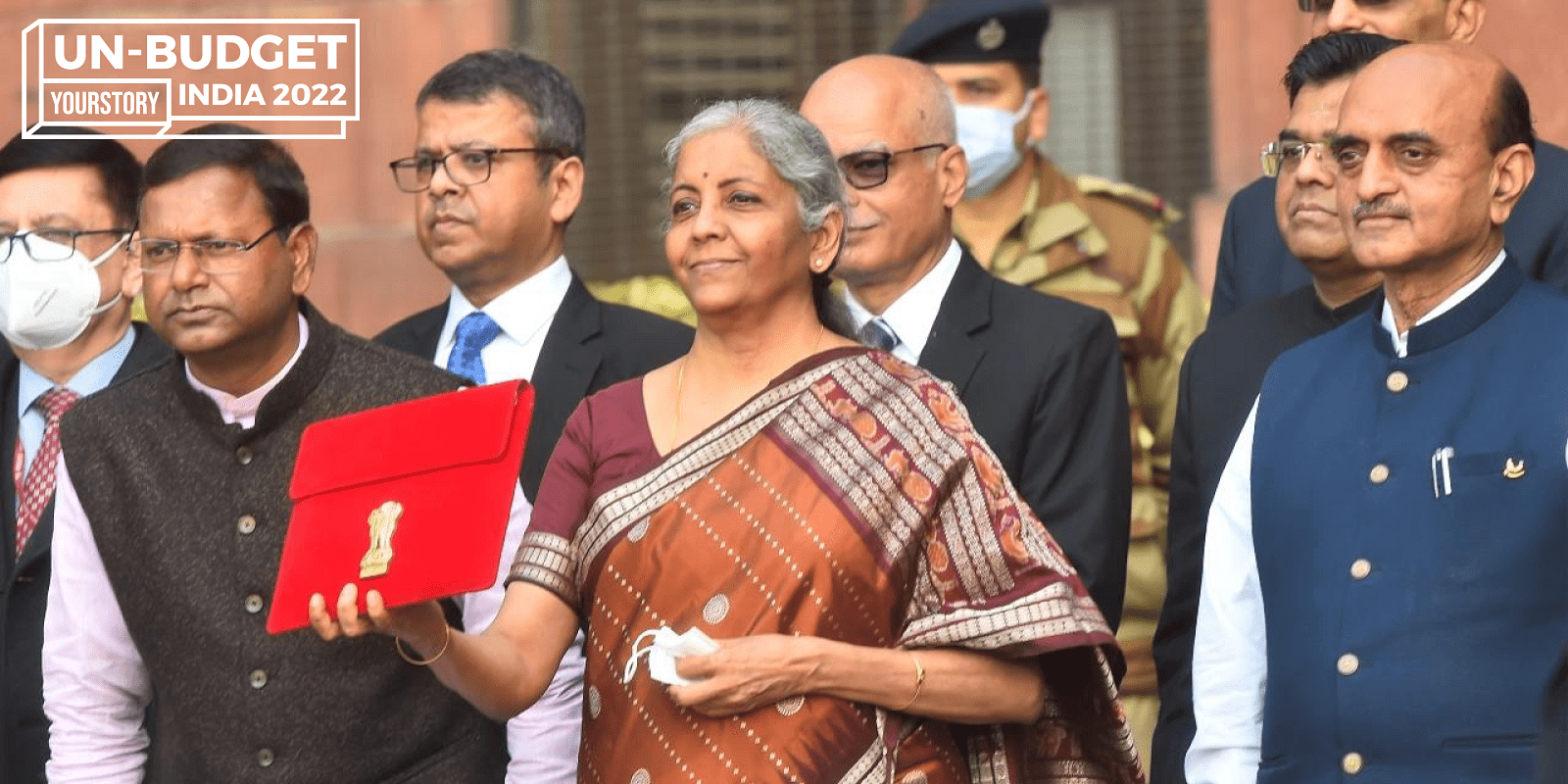 Reading from a Made in India tablet, Finance Minister Nirmala Sitharaman earlier today presented her fourth Union Budget — her shortest yet.

Ahead of the Budget, Sensex surged over 600 points and Nifty advanced 159 points in opening trade, starting the day on an auspicious note.

Hailing that ‘Amrit Kaal’ is truly here — a callback to Prime Minister Narendra Modi’s speech last year wherein he said India’s ‘Amrit Kaal’ will be a period of 25 years when the country works towards becoming “Aatmanirbhar” — Sitharaman put a focus on four pillars of development.

These are inclusive development, productivity enhancement, energy transition and climate action, all to be guided by the PM Gati Shakti master plan.

She said, “The scope of PM Gati Shakti National Master Plan will encompass the seven engines for economic transformation, seamless multimodal connectivity and logistics efficiency. It will also include the infrastructure developed by the state governments as per the Gati Shakti Master Plan. The focus will be on planning, financing including through innovative ways, use of technology, and speedier implementation.”

For all the key takeaways from Budget 2022, here’s a roundup of YS’s comprehensive coverage of the Finance Minister’s Budget Speech:

In the first 30 minutes of her speech, Sitharaman highlighted broader themes the budget would focus on. As widely expected — partly due to the upcoming elections in the battleground state of Uttar Pradesh — the finance minister said the budget will be “pro-farmers, youth, women, and ST/SCs”.

Reading the digital budget this year from a Made in India tablet — a nod to the BJP government’s startup-friendly stance — Sitharaman said Budget 2022 will be a blueprint for the next 25 years, and emphasised “sabka prayaas” is expected to become a major focus for the government over the next few years for strong growth.

The FM highlighted that the Emergency Credit Line Guarantee Scheme (ECLGS) has been extended to March 31, 2023.

In addition, she also announced that the guarantee cover of this scheme will be expanded by Rs 50,000 crore to Rs 5 lakh crore. This additional amount is being “earmarked especially for the hospitality and related sectors.”

Sitharaman said that MSME portals such as Udyam, e-shram, NCS and Aseem will be inter-linked, and their scope will be widened. They will now perform as portals with live organic databases providing G-C, B-C and B-B services such as credit facilitation, enhancing entrepreneurial opportunities.

Finance Minister Nirmala Sitharaman revealed the government has proposed to introduce “a digital rupee using blockchain and other technologies issued by The Reserve Bank of India (RBI), starting 2022-23.”

The digital rupee will be a Central Bank Digital Currency (CBDC), and Sitharaman said it will “give a big boost to the digital economy.” Such a digital currency would lead to an efficient and cheap currency management system, she added.

Putting women in focus, the FM also declared, “Nari Shakti is the harbinger of our bright future.”

She elaborated, “Recognising the importance of Naari Shakti as the harbinger of our bright future and for women-led development, our government has comprehensively revamped the schemes of the Ministry of Women and Child Development. Three schemes — Mission Shakti, Mission Vatsalya, and Saksham Anganwadi and Poshan 2.0 — were launched recently to provide integrated benefits to women and children.”

The government will upgrade two lakh anganwadis under this scheme, she noted.

Additionally, a new scheme — the Prime Minister’s Development Initiative for the NorthEast — will be implemented through the NE Council, which will enable livelihood activities for youth and women in the region.

Finance Minister Nirmala Sitharaman said income from the transfer of any digital assets will be taxed at 30 percent.

Although the minister did not directly refer to cryptocurrencies as virtual digital assets, it is likely that crypto tokens will be taxed at a flat rate of 30 percent.

She added there would be no deduction possible in any expenditure or allowance while computing income from the transfer of digital assets, except the cost of acquisition.

Finance Minister Nirmala Sitharaman on Tuesday announced the establishment of a Digital University built on a hub and spoke model to provide education. She also said that the ‘one-class, one-TV’ channel will be implemented to provide supplementary education to children to make up for the loss of formal education due to the COVID-19 pandemic.

Sitharaman further announced that the PM eVidya Scheme will be expanded from 12 channels to 200 channels to facilitate supplementary learning for all classes I to XII in regional languages.

In addition, skilling programmes will be reoriented.

From Kisaan drones to chemical-free natural farming and a new fund, Finance Minister Nirmala Sitharaman announced several plans for the agritech sector while presenting the Union Budget for the financial year (FY) 2022-23.

Sustainability and public-private partnerships (PPP) for the delivery of digital and high-tech services to farmers emerged as key themes for the sector in this year’s budget.

The central government will facilitate a fund with blended capital under the co-investment model through the NABARD, the minister said. The National Bank for Agriculture and Rural Development–NABARD– is an apex regulatory body under the Ministry of Finance to regulate regional rural banks and apex cooperative banks in India.

As a part of the Union Budget 2022, Finance Minister Nirmala Sitharaman announced various measures to promote energy efficiency and sustainability in the country.

The minister pointed out that by the time India turns 100, nearly half of the country’s population is likely to be living in urban areas.

“To prepare for this, orderly urban development is of critical importance. This will help realise the country’s economic potential, including livelihood opportunities for the demographic dividend. For this, on the one hand, we need to nurture the megacities and their hinterlands to become current centres of economic growth,” she says.

For urban capacity building, support will be provided to the states. Modernisation of building bye-laws, Town Planning Schemes (TPS), and Transit Oriented Development (TOD) will be implemented. This will facilitate reforms for people to live and work closer to mass transit systems.

The Budget also had a few announcements regarding electric vehicles (EVs), and clean and sustainable mobility. FM Nirmala Sitharaman proposed that the government will bring a battery swapping policy with formulated interoperability standards, considering the constraint of space in urban areas for setting up charging stations at scale.

“The private sector will be encouraged to develop sustainable and innovative business models for ‘Battery or Energy-as-a-Service’. This will improve efficiency in the EV ecosystem,” said the Finance Minister.

During the Union Budget 2022 speech today, Finance Minister Nirmala Sitharaman said income from the transfer of any virtual digital assets (such as crypto and NFTs) will be taxed at 30 percent.

Further, she revealed the government has proposed to introduce “a digital rupee using blockchain and other technologies issued by The Reserve Bank of India (RBI), starting 2022-23.”

Finance Minister Nirmala Sitharaman on Tuesday said the government will set up 75 digital banking in 75 districts of the country via scheduled commercial banks to boost the penetration of formal financial services and serve the underbanked population of India,

About 1.5 lakh post offices in India — which will join the core banking system — will also play a part in enabling financial inclusion by offering people access to their bank accounts via net banking, mobile banking, and ATMs. They will also enable the online transfer of funds between post office accounts and bank accounts, the budget stipulated.

The Union Budget of 2022-23 has firmly placed the startup segment of the country in the forefront by laying down the vision of the digital economy and a start has been made with a few tax concessions with a bold promise of attracting further capital into this ecosystem.

Such a roadmap is vital in the era of ESG (environment, social, and governance), and the 2022-23 Budget might well prove to be prescient for a balanced socio-economic framework.

Among the outlay on major schemes,

This was the 10th Budget presented by the Modi government, and the fourth helmed by FM Nirmala Sitharaman.

While the PM Narendra Modi-led government outlined an overarching vision to strengthen an Aatmanirbhar Bharat for the next 25 years, termed as Amrit Kaal by the Prime Minister, netizens, of course, engaged with the 90-minute Budget speech with a slew of memes.

The Startup Magazine Starting a Cafe Business in 4 Easy Steps

In Battle With Ashneer Grover, Will BharatPe Go The Housing.com Way?

Does Russia’s attack on Ukraine reveal the future of war?