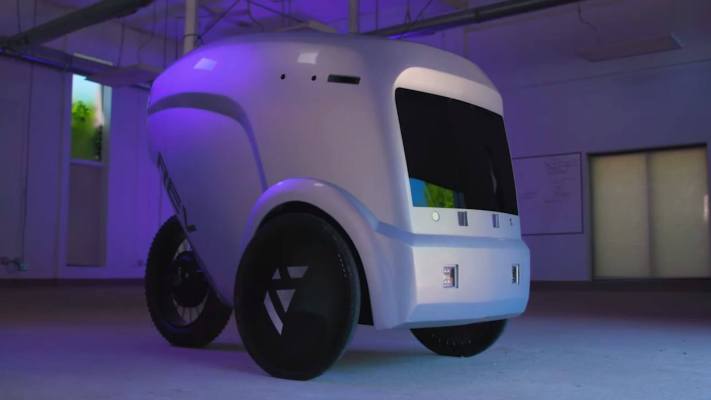 Ann Arbor-based Refraction AI announced today that it has raised a $4.2 million seed round. The startup, which debuted on the TC Sessions: Mobility stage back in 2019, was founded by a pair of University of Michigan professors (Matthew Johnson-Roberson — now CTO — and Ram Vasudevan) seeking to solve a number of issues posed by many delivery robots.

With an initial prototype built on a bicycle foundation, the company’s REV-1 robot is designed to operate in bike lanes and roads, rather than the standard sidewalk ‘bot. The different approach allows the robot to travel at higher speeds (topping out at 15 miles per hour) and removes some of the messy pedestrian-dodging issues that come with sidewalk use (while introducing some new ones on that narrow sliver of asphalt shared by cyclists).

Refraction is currently testing a small fleet in its native Ann Arbor. The seed round, led by Pillar VC, will be used for R&D, expanding the company’s reach and recruiting more customers, with a focus on grocery store and restaurant deliveries. Other investors include, eLab Ventures, Osage Venture Partners, Trucks Venture Capital, Alumni Ventures Group, Chad Laurans and Invest Michigan.

Another key differentiator is the use of cameras, versus LIDAR. The decision comes with some technological trade-offs, but benefits include a lower price point and the ability for the company to more quickly scale its fleet. The technology is also not easily districted by weather conditions encountered in the upper midwest, though it has limitations, too. As the company puts it, if you’re not comfortable walking out in it, the robot probably won’t be, either.

“Our platform uses technology that exists today in an innovative way, to get people the things they need, when they need them, where they live,” CEO Luke Schneider said in a release tied to the news. “And we’re doing so in a way that reduces business’ costs, makes roads less congested, and eliminates carbon emissions.”

With this new funding, the company plans to expand operations beyond its native Ann Arbor, though no additional test markets have been announced.

After OYO in 2019, BYJU’S sees a founder take out a loan to buy back shares

How disruptive technologies can address the disparities in healthcare delivery

How Robot-Chefs Are Transforming Unit Economics In Foodtech Sector

The Best Entrepreneurs Are Generalists, Not Experts