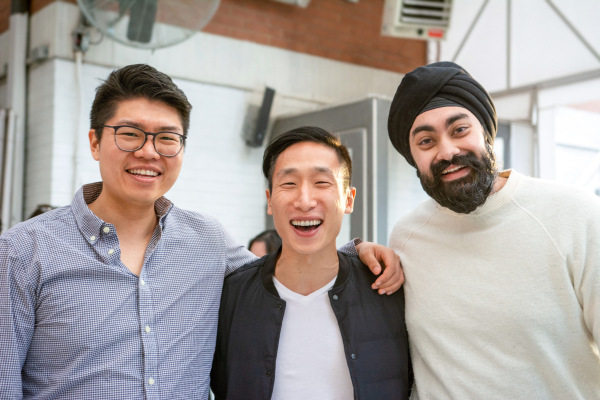 There has been a flurry of investments in startups focused on acquiring third-party sellers on Amazon and helping them build their businesses.

The latest is Acquco, which aims to stand out from the others in that it was formed by a pair of founders — Raunak Nirmal and Wiley Zhang — who actually worked at Amazon, and then built multimillion-dollar businesses on its platform.

The New York City-based startup has raised $160 million in debt and equity in a Series A round that it says will fund its “aggressive growth plans.” CoVenture, Singh Capital Partners, Crossbeam and other notable investors such as GoDaddy CEO Aman Bhutani put money in the equity portion of the round. Acquco would not disclose the valuation at which the money was raised, nor the exact breakdown of debt and equity, other than to say “a significant portion was equity.” But CEO Raunak Nirmal did share a few other notable things.

For one, the company has already scaled to over $100 million in revenue since its founding (in a year’s time) while deploying less than $2 million of equity capital. Plus, it’s been profitable “since day one,” he said.

Nirmal also claims that Acquco’s proprietary technology and “proven playbooks” give it an edge against competitors such as Thrasio and Perch. Specifically, the company says it helps Amazon sellers exit their business within 30 days and continue to scale their business “to the next level” post-acquisition. It also claims to offer flexible terms and that it does not prevent entrepreneurs from selling again on Amazon.

Acquco says it identifies the best businesses to acquire, and leverages what it describes as “flexible founder-friendly deal structures,” which essentially gives sellers a way to make money from the exit and then still get a cut of revenues down the line. The company claims that it on average achieves over 100% revenue growth after migrating brands onto its platform.

Forming Acquco was not an overnight story, but rather was years in the making.

“My first job out of college was actually at Amazon. I worked as a business analyst on the merchant technologies team there, which was really focused on third-party selling and helping empower third-party sellers to grow on the platform and then just growing that segment of the business,” Nirmal recalls. “At the time, third-party selling was smaller than the retail side for Amazon.”

A lot has changed since then, of course, as that segment of the e-commerce giant’s business has grown dramatically.

In recent years, most sales on Amazon have come through Amazon Marketplace, where millions of outside sellers compete to find customers. Many pay Amazon to store and ship their goods, making them eligible for Prime shipping through an arrangement known as Fulfillment by Amazon, or FBA. This is where Acquco is focusing.

While at Amazon years ago, Nirmal was tasked with starting a brand on the site so he could better understand sellers’ pain points, as well as the tools that could be built “to really help them grow.”

Eventually, Nirmal left Amazon to pursue selling on Amazon full time because the brand he’d started ended up selling over $7 million in its first year. After that, he and COO Zhang built and sold multiple brands in the Amazon ecosystem before going on to consult for “some of the largest sellers in the marketplace,” primarily based in China but selling in the U.S. market.

“A lot of these guys are actually public companies now,” Nirmal said.

The duo went on to co-found a seller outsourcing firm in the Philippines, which helps to minimize the cost of operating the brands for sellers and make it more accessible for sellers that don’t have a huge team to build something on Amazon.

Then they founded a company called Refund Labs, a seller tool that helps sellers essentially automatically identify issues in the payments that they receive from Amazon as well as recover money on their behalf for things like inventory that gets damaged or lost or the fees that are being charged that might be incorrect.

Nirmal stepped down as CEO of Refund Labs to form Acquco.

“What we wanted to do is take this knowledge and experience that we really have built up over the last seven years, and apply it in the best way possible,” Nirmal told TC. “And rather than building brands from the ground up, or consulting for some of these large sellers, we thought, ‘Why not go and buy the best brands, and then help grow them using our expertise?’ ”

The company says its proprietary algorithms analyze thousands of criteria sets and millions of data inputs “to automate and maximize the performance of the core functions within supply chain and brand management” across their portfolio.

Acquco plans to use its new capital to enter “hypergrowth mode,” according to Chief Strategy Officer Jerel Ho, who most recently led corporate development and strategy at WeWork, where he closed over $40 billion in M&A deals.

The startup has the ambitious goal of scaling its portfolio to over $500 million in revenue by 2022. It plans to put the new money toward continuing to build out its technology platform — including tools that can automate the management of an entire brand on Amazon and across other retail channels — as well as continuing to acquire brands. It’s also, naturally, going to do some hiring.

“We’ve done a lot with very little,” Ho told TC. “But hyper growth plans require a much larger team across all functions.”

CoVenture founder Ali Hamed says that the Amazon third-party seller ecosystem does $200 billion of revenue and is growing at a compounded annual growth rate (CAGR) of over 50%.

“It’s the most attractive market we’ve seen since founding our firm,” he told TC. “And of all the people we’ve talked to, Raunak is as plugged into the Amazon ecosystem as anyone we could find. In many ways, he taught us how to look, think and deploy capital into the market.”

To say Hamed is bullish on Acquco would be an understatement. Since first investing in the company in 2020, Nirmal “has exceeded” all of CoVenture’s expectations.

“We’ve been begging him to take more money every three months since writing our first check,” Hamed added. “Raunak is able to help buy businesses and make them better than they ever were before. He has a vision of how to operate these assets post-purchase that other operators who are not Amazon-native just don’t have.”

Besides Thrasio, other players in the space that have recently raised funding include Branded, which recently launched its own roll-up business on $150 million in funding, as well as Berlin Brands Group, SellerX, Heyday, Heroes and Perch. And, Valoreo, a Mexico City-based acquirer of e-commerce businesses, raised $50 million of equity and debt financing in a seed funding round announced in February.

Innovation and The Future of Dental Care