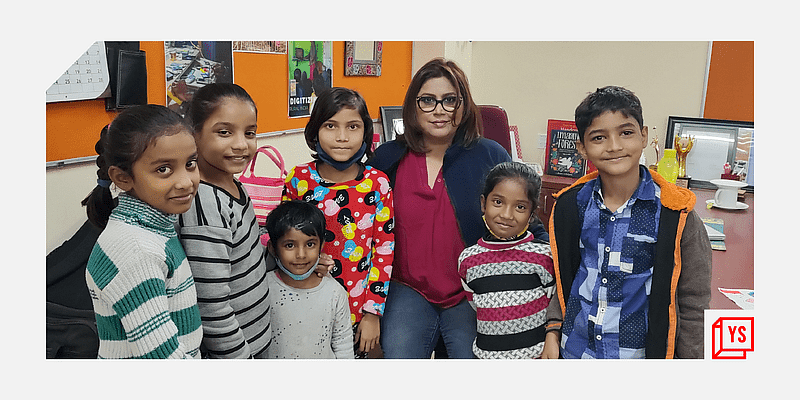 Investing in education is fundamental to development and growth. Individuals thrive on essential livelihood skills, and education is one that has the power to change the world. And yet, it has turned out to be a privilege that not everyone can afford.

There are several organisations across the country that are working tirelessly to change this trend and provide proper access to education for children in rural areas and urban slums. In a bid to provide education to underprivileged children, Captain Indraani Singh founded Literacy India in 1996, a non-profit organisation that has played a major role in driving people towards education in rural areas. Operating tirelessly from the grassroots level to ensure every child receives education, Literacy India has stayed true to its mission of ‘education with a purpose’.

Genesis of a non-profit organisation

Captain Indraani Singh recalls that when Literacy India set out on its mission to help children, they realised that people residing in slums and rural areas nurtured a different perspective towards life. Education wasn’t a priority in their lives, and two decades later, the thought has changed completely.

A pilot by profession, Singh has worked with numerous communities and government schools to ensure the retention of students in schools and bridge the learning gap of children. But the road wasn’t always easy. After flying with Air India for 33 years, she speaks from experience when she says that pilots don’t usually end up in social work, especially at the grassroots level.

When she started off, no one took her seriously because of her profession. She didn’t belong to a social sector either, so Singh had to learn her way up, and she planned her approach in a way that her non-profit organisation could make a difference. She says that understanding the behaviour, culture and ethnic background thoroughly and coming up with a solution was very important, and overcoming that barrier helped her reach out to more communities.

Literacy India began its journey with Pathshala when Singh facilitated education for five children in Chauma village of Haryana. Eventually, it led to creating Digital Education innovation mainly to engage street children which managed to mainstream and rehabilitate around 200 street children. Digital Education innovation was named Gyantantra Digital Dost which not only helped street children, drop outs but over 200,000 students of government schools across different states, few of them are schools of Nimmu Block, Laddakh.

The holistic development of children is essential for them to be successful in life, and Vidyapeeth, Literacy India school project Campus in Gurgaon ensures everyone receives a basic quality education to help boost overall development. Literacy India’s flagship initiative also aims to upgrade the vocational skill set of children to help them change their attitude towards life.

Rahul Kumar, popularly known for his role as ‘Millimeter’ from the movie 3 Idiots, is one huge success story that rose through the ranks at the learning Centre. Having completed his schooling, Rahul was helped greatly by Captain Indraani who reached out to stars like Raju Hirani, Boman Irani, and Vidhu Vinod Chopra, who sponsored his education. This guidance worked wonders as Rahul’s acting skills are recognized by film industry and working in scores of films and TV serials.

The daughter of an auto-rickshaw driver and a cook, Gayatri Kushwaha is one of five siblings who had to brave all odds to continue her education. A brilliant scholar who came out as one of the toppers of the MENSA IQ test held at Literacy India. Gayatri benefitted from Literacy India’s Gurukul scholarship program greatly and completed her education from a Public School in Gurugram.

Gurukul was started to find hidden talent in the form of MENSA scholars and has provided these scholars with everything from non-formal education, formal schooling, and private schooling to education in engineering colleges and professional institutes. Students who have been supported through all the education projects most of them are working in MNCs and other various industries today, which shows the value of education in society.

In 2010, Gurukul expanded from Delhi-NCR to Purulia West Bengal, in order to empower the tribal community’s children especially girls, who are first generation learners by educating them and helping them become self-reliant. Decade later, these girls have become a role model for their communities and it has dampened the efforts of marrying the girls at an early age.

The definition of literacy has changed in recent years, and digital literacy has become a major aspect of education. Singh says that their digital presence has become an integral part of their operations, and initiatives like Gyantantra Digital Dost (GDD) have helped students gain access to mobiles and laptops to ensure digital education.

While many such platforms have become hugely popular after the onset of the pandemic, Literacy India has been following this model for nearly a decade now. With support from Dell Technologies, Literacy India developed Gyantantra in its early years, its dynamic curriculum which has animation and games enabling students to learn at their own pace through computers, Tablets and smartphones Gyantantra has become ‘go to’ digital program to strengthen the primary education of the poor and underserved children of the country. It is designed in Hindi and English therefore covering the National and Global language for primary schools.

Fizza , a daughter of roadside Dhaba -wala, use to face difficulties in focusing on her studies due to distractions and managing her daily chores, eventually she dropped out of school. A regular and sincere student, she was enrolled in GDD, her pre-test showed that she was weak in English and Mathematics. Eventually with the help of GDD, she became better and cleared her board exams.

Another such student was Maya, who shied away from other children and extracurricular activities but enrolling in GDD helped her gain confidence, get a good grasp on concepts, and perform well in her tests.

With the motto ‘Earn While You Learn’, the Karigari initiative was started to train and provide subsistence to oppressed women and youth across various parts of India. This initiative also introduced backward communities to modern livelihood options and gave them the opportunity to explore new avenues where they could put their skills to good use.

With a focus on grooming youth as the leaders of future generations, Karigari presented opportunities to the youth and women by designing several programs and entrepreneurship models. This initiative taught skills like designing, painting, embroidery, and more to help them find suitable and sustainable careers including self employment.

Education is not limited to textbook learning, and Indha proved that possessing livelihood and artisan skills can help a person feel empowered. Under the guidance of Captain Indraani, the initiative was launched with an aim to focus on the skill development of women from urban slums and rural communities in Delhi-NCR, Haryana, West Bengal, Jharkhand, and Rajasthan. With over 650 women working in 17 centres, the initiative has actualized the true spirit of Corporate Social Responsibility and has helped over 10,000 artisans.

Going by its out-of-the-box ideas to help women upskill, Literacy India imparted motor driving lessons to women, a flagship project under the Women Empowerment Program that listed the non-profit organisation in the Limca Book of Records for finding India’s first woman driver.

There are very few people who know the joy of feeling empowered that Poonam feels, who carved a new career for herself by learning to drive under Sakha programme after completing her schooling. She handled airport pick-up and drops initially and being adept with GPS and road signals gave her an edge over others to grow. Presently, she works as a chauffeur for the United Nations office in New Delhi, which is a testament to the wonders that holistic education can do.

In a bid to increase livelihood opportunities for women and be part of sustainability, Literacy India also set up a waste-paper recycling unit in Gurugram, becoming the first non-profit organisation to do so in the region. Apart from working towards saving the environment, this unit also empowers local women by providing them with options to earn their daily bread.

Good healthcare is hard to find, especially in rural areas, and Literacy India aimed to address this challenge by launching Project Arogyam. This initiative addressed health-related issues in the community and focused on providing basic medical facilities for underprivileged folks, especially for children, women, and elderly citizens.

In its journey of 25 years, Literacy India has touched more than half a million lives. Apart from making life better for underprivileged people, the NGO is also focused on saving the environment with the help of several initiatives.

Since the beginning of 2020, Literacy India Campus has been doing rainwater harvesting and utilising solar energy at their school in Bajghera, an idea later implemented in Rajasthan and Gujarat as well. , In 2015, Literacy India focused on encouraging organic farming and educating farmers about sustainable agriculture in order to try and preserve the environment. Since then, over 200 Krishi Sakhis have been trained to adopt organic kitchen gardening and farming. Literacy India takes pride being a part of Nation`s SDG2030 goals.

Literacy India’s story has been that of growth, progress, and like-minded individuals coming together to help marginalised societies across the country. With a vision to drive change in society, Literacy India surely has made an infallible impact on the way society perceives education over the last 25 years.