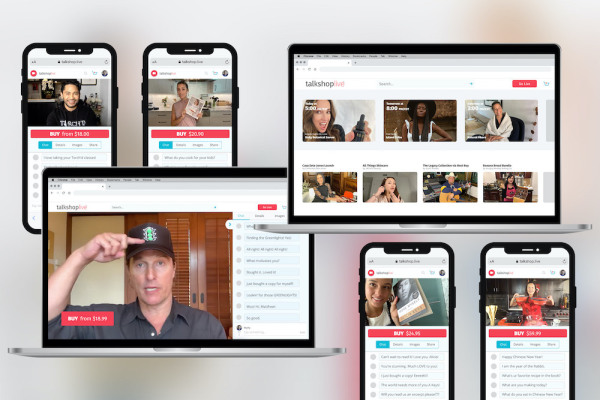 Talkshoplive is a startup that’s worked with stars like Paul McCartney and Garth Brooks, as well as small businesses, to host shopping-focused live videos. Today, it’s announcing that it has raised $3 million in seed funding led by Spero Ventures.

CEO Bryan Moore founded the company with his sister Tina in 2018. Moore previously led social media efforts at Twentieth Television (previously known as Twentieth Century Fox) and CBS Television, and he said he was inspired  to launch Talkshoplive by the rise of livestreamed shopping experiences in China.

At the same time, Moore said it wasn’t enough to just copy what worked in China: “Small businesses are different here, talent is different, the needs are different.” One of the keys, in his view, is to focus on helping creators and businesses meet their customers where those customers already are — which he also suggested differentiates Talkshoplive from competing services as well.

For one thing, the startup does not require consumers to download any additional apps in order to watch its videos. Instead, it’s created a video player that works on the Talkshoplive website, on the websites of its partners and anywhere else that videos can be embedded. And wherever those videos are played, they also include a one-click buy button.

Moore said Talkshoplive started out with a focus in books and music, working with famous names like Matthew McConaughey, Alicia Keys and Dolly Parton, as well as the aforementioned Brooks and McCartney. For example, Brooks used Talkshoplive to exceed more than 1 million vinyl pre-sales for his “Legacy Collection” box set in 2019.

On the book side, Talkshoplive has worked with publishers including Harper Collins, Penguin Random House, Simon & Schuster and Macmillan. And Moore claimed the platform three to nine times the sales an author would see on other e-commerce sites.

At the same time, he emphasized that the startup is also working with more than 3,500 small businesses, and he said that when a small business owner is broadcasting on Talkshoplive, “You’re creating your own micro-fandom by being able to tell the story … You’re making yourself a brand story, even as a small business.”

In this sense, Moore said he sees Talkshoplive as a continuation of his previous work in social media, all connected by the question, “How are you creating human connection in a digital landscape?” The “ultimate goal,” he added, is turn the platform into a “digital Main Street” for businesses everywhere.

More recently, Talkshoplive has been moving into other categories like food and beauty, and Moore said he’s excited to work with Spero Founding Partner Shripriya Mahesh (previously an executive at eBay and First Look Media) to “continually evolve our product and create these tools that help us scale faster — and also help benefit these businesses.”

“From the moment we met the talkshoplive team, we were impressed with their focus on enabling SMB’s with a new, creative, innovative way to build their businesses,” Mahesh said in a statement. “Talkshoplive also innovates on the marketplace model with a way for buyers to truly engage with the sellers, get to know them, and experience shopping in a whole new way. We are incredibly excited by the community that is taking shape at talkshoplive and are thrilled to be working with Bryan, Tina, and the TSL team as they grow their community and the marketplace.”

Nursing Home Abuse: Don’t Hesitate to Stand Up for Your Rights!

Build a solid deck for your quarterly board meetings – TechCrunch