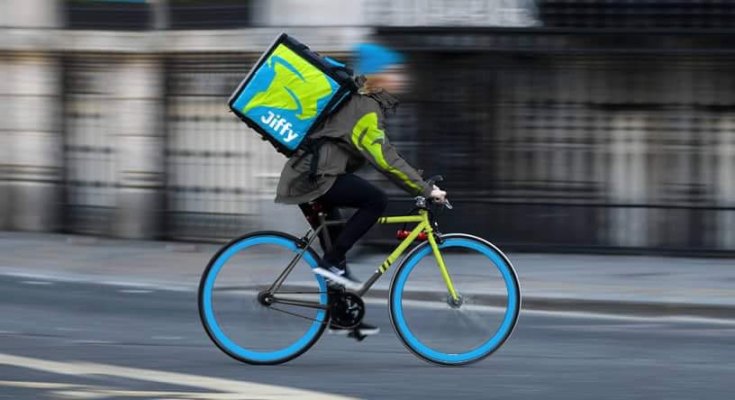 Another online grocery delivery and “dark store” operator breaks cover today: London-based Jiffy, which aims to deliver fresh groceries and household essentials in around 15 minutes, has raised £2.6 million in seed funding as it readies for launch.

Jiffy says it will use the injection of capital to launch its first stores in London, as early as this month. It plans to make the service available in Westminster, Waterloo, Lambeth, Battersea, Clapham Town, Shoreditch, Bethnal Green, Hackney, Whitechapel, Stepney Green, and Leytonstone.

The company will then launch a further 20 local fulfilment hubs across the U.K. later this year, and I understand is already out fundraising again. On its deck is likely a slide highlighting an executive team with online and offline retail chops, including former managers from Sainsbury’s and Deliveroo.

“We live in 2021 when you can purchase a ticket to Mars, but you still can’t get your groceries delivered on demand when you need them,” says Jiffy founder Artur Shamalov, who has previously started several companies in the food and delivery space. “The online grocery shopping experience is frustrating for most U.K. customers, as slots are often unavailable for days and weeks in advance, and some stores charge a premium fee for a ‘rapid’ delivery that still takes up to two hours. We believe it shouldn’t be this way, and that getting your groceries should be as accessible and affordable as shopping at an offline grocery store, but with the convenience of an ultrafast delivery service”.

To that end, Shamalov says that Jiffy is creating a service it believes will partially replace the traditional daily grocery shop. This will see it offer a variety of fruits and vegetables, meats, meals, and household essentials from popular brands and local suppliers, with a total product range “exceeding” 2,000 SKUs per store.

“Our goal is to make it as accessible as possible for a very wide audience: from busy parents juggling work, raising children and an active social life to busy professionals in urban areas for whom saving time on essential shopping means they are free to use it for activities they really enjoy,” says the Jiffy founder. “We also think of the many vulnerable people who don’t feel safe going to supermarkets these days. They shouldn’t have to worry about their safety when they run out of bread or milk, nor should they have to wait several hours or days for their order to arrive”.

Jiffy joins a host of European startups that have raised money on the promise of delivering grocery and other convenience store items within 10-20 minutes of ordering. They do this by building out their own hyper-local, delivery-only fulfilment centres — so-called “dark stores” — and recruiting their own delivery personnel. This full-stack or vertical approach and the visibility it provides is then supposed to produce enough supply chain and logistics efficiency to make the unit economics work, although that part is far from proven.

On how competitive the grocery and convenience dark store market is already becoming in the U.K. and elsewhere in Europe, Shamalov notes it’s still a relatively new space, and that all players are creating the infrastructure required to make instant grocery delivery possible. “We believe that within a couple of years, instant grocery delivery will become an essential part of urban infrastructure, in the same way water pipes, broadband lines and telecoms are now,” he says. “So, in a sense, we are all building this new infrastructure together, and we are all competing jointly against the traditional grocery distribution channels”.

The growing (though not definitive) list includes Berlin’s Flink, which has raised $52 million in seed financing in a mixture of equity and debt, and Berlin HQ’d Gorillas, which has raised $44 million in Series A funding and recently expanded to London in addition to Germany and Netherlands. Also operating in London are Weezy, Getir, Dija and Zapp. The U.S. unicorn goPuff is also reportedly looking to expand into Europe and has held talks to acquire or invest in the U.K.’s Fancy.

It’s not just a land grab but a capital grab, too, since the model is an infrastructure play as much as anything. Large amounts of financing will be needed to build stores and run loss leading customer acquisitions campaigns, something that is already ramping up in London. In contrast to competitors, although it is yet to launch, Jiffy appears underfunded.

“We don’t think we are underfunded,” says Shamalov, pushing back. “We take as much capital as we think is efficient considering dilution of the founders and building the company step by step rather than missing out on overpromised ambitions.

“We don’t necessarily agree that having the most funding and overspending on acquisition and expansion will automatically lead to a greater success in this industry. Hyperlocal business models require a hyperlocal approach to everything, so our focus is on expanding within just one market, instead of going globally”.

In addition, Shamalov claims that Jiffy is seeing strong inbound interest from investors, which he says is surprising since the startup is still operating in a stealth mode. “We are confident the next funding round will be a solid step forward,” he adds.

Here Are The Indian Apps That Track The Modern Lifestyle