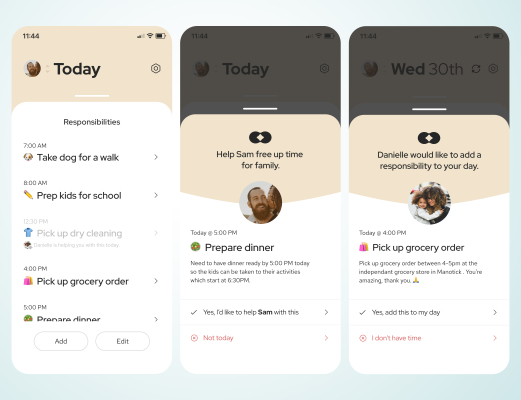 Much of our daily lives have been transformed in one way or another by technology – and often through intentional efforts to innovate thanks to the advent of new technology. Now more than ever, we rely on shared collaboration platforms and digital workspaces in our professional lives, and yet most of the changes wrought by tech on our home and family lives seem like the accidental effects of broader trends, rather than intentional shifts. Maple, a new startup launching today, aims to change that.

Founded by former Shopify product director and Kit (which was acquired by Shopify in 2016) co-founder Michael Perry, Maple is billed as “the family tech platform,” and hopes to ease the burden of parenting, freeing up parents, aunts, uncles, grandparents and kids to spend more quality time together. The startup, which is launching its app on iPhone and Android for all and onboarding new users from its waitlist over the next few weeks, has raised $3.5 million in seed funding – an impressive round for a company just about seven months into its existence. The round was led by Inspired Capital, and includes participation by Box Group, but is also supported by a number of angels who were Perry’s former colleagues at Shopify, including Shopify President Harley Finkelstein.

Perry and his co-founder Mike Taylor, who also co-founded Kit, decided to leave Shopify in order to pursue Perry’s vision of a platform that can help parents better manage their family lives – a platform made up of a social layer, a task-focused list of shared responsibilities, and a bourgeoning service marketplace that looks and feels a lot like the ecosystem Shopify has built for empowering e-commerce entrepreneurs. That’s by design, Perry says.

“I think you’re gonna see a lot of Shopify inspiration in this product – we think we’re the back office of every family,” Perry told me in an interview. “And we think we’re building the app ecosystem of apps, services, all kinds of things that are going to live on this platform that’s going to revolutionize parenting.”

In its current early incarnation, Maple’s primary interface for parents is a list of various tasks they need to take care of during the day. During onboarding, Maple asks parents what they’re typically responsible for in the household, and then uses some basic machine learning behind the scenes to build a customized schedule for getting those things done. Maple has signed on three initial partners to assist with accomplishing some of these tasks, including Evelyn Rusli’s Yumi food and nutrition brand for infants; Lalo, a DTC baby and toddler furniture and gear brand; and Haus, which will be providing date night packages for parents to enjoy for some getaway time. 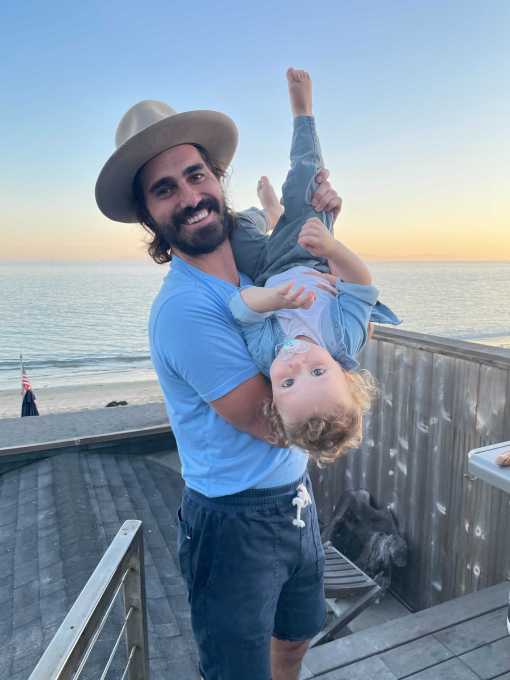 The platform will offer users the ability to tap others for help with tasks – these could be other family members added to the household, or the partners mentioned above (the plan is to bring on more, but to gate admittance initially while developing API endpoints that any company can potentially tap into). When interacting with family members, Maple also encourages smalls social interactions, like thanking someone for their help on a particular task or just showing general appreciation. Perry says this is a key ingredient he prioritized in product design.

“We have this cool thing that every day at eight o’clock, we give you an end of the day recap with your family,” Perry said. “So you click on it, and it will show me that, for example, Alex [Perry’s wife] completed three responsibilities for our family today, and how many I did for my family today, and how much help I received from other people today. And directly in app, you can send these cool little ‘Thank you ‘messages and say, you know, I love you, I appreciate you – we’re a great team. And Alex will get those messages. We believe in a world where this can be incredibly dynamic, in many different ways kto kind of bring some love and appreciation and make parenting feel more rewarding and easier.”

Perry is quick to note that what Maple offers today is only the beginning, and it’s clear he has bold ambitions for the platform. He talked about building “the family graph,” or a trove of data that can be used to not only build intelligent recommendations and develop ever more advanced machine learning to optimize family management, but also to provide partners with the tools they need to build products to best serve families. I asked Perry what that means for privacy, given that people are likely to be far more reluctant to share info around their families than they are about their work lives. He said the they team plans to go slow in terms of what it exposes to partners, when, and how, and that they’ll have user privacy in mind at each step – since, after all, Perry himself is a father and a husband and is wary of any incursions on his own private life.

For now, partners like Yumi only receive what users share with them through their own account creation and login mechanism, and they only pass back a basic attribution token – essentially letting Maple know the task was completed so it can mark it off in a user’s list. 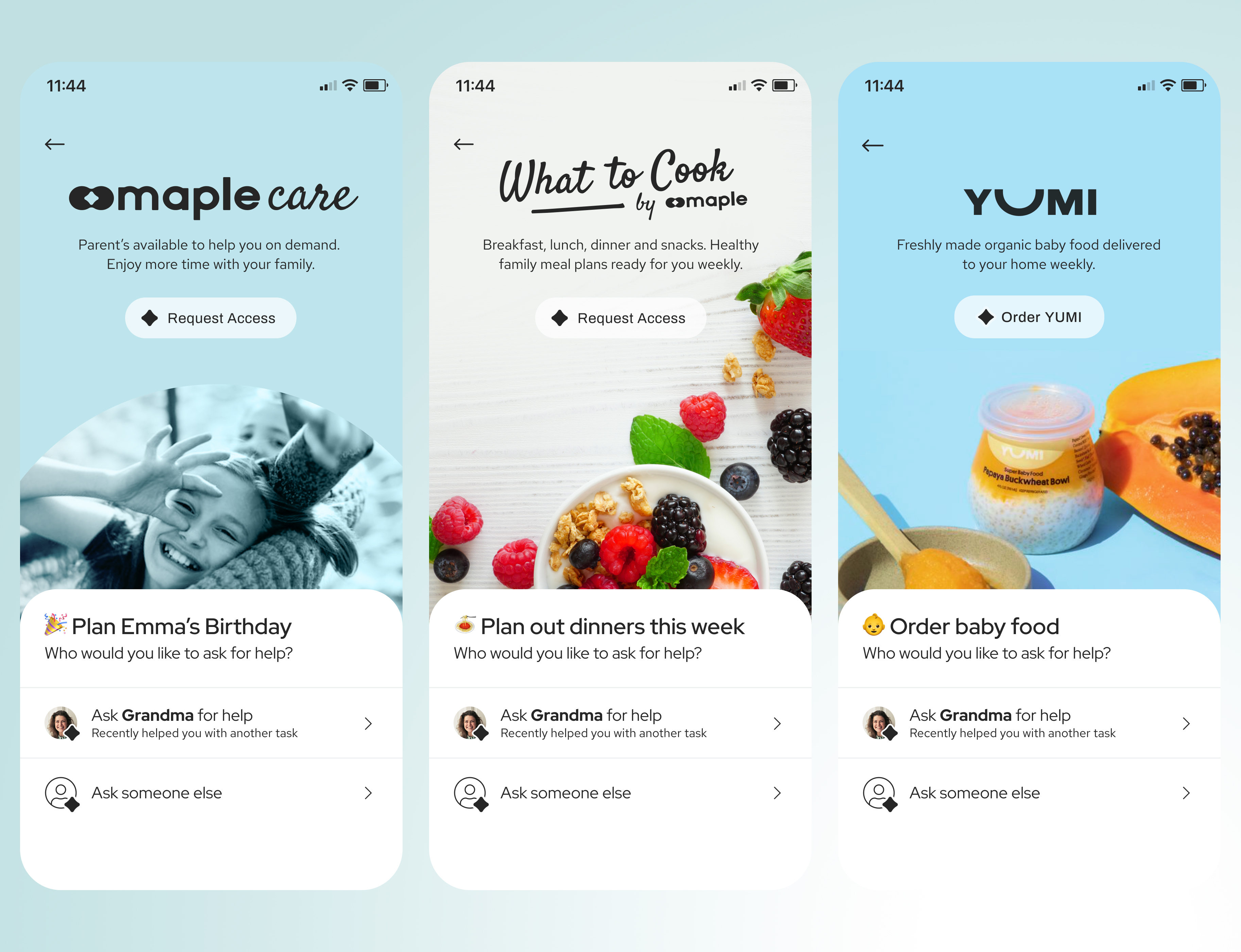 Maple’s partners today are representative of the kind of businesses that might make use of the platform in future, but Perry has a much broader vision. He hopes that Maple can ultimately help parents handle their responsibilities across a wide range of needs and income levels. Right now, Perry points out, a lot of what’s available to parents in terms of support is only available to higher income brackets – ie., nannies and dedicated caregivers. Perry says that his experience growing up relatively poor with a single mother supporting the entire family led him to want to provide something better.

“You have 125 million households in America, you have 3 million children being born every year, you have 30% of the households in America being single parent-run households,” Perry said. “It’s hard. Some people are working one two jobs, most couples are working couples. Every industry that’s changed has been about making things more accessible. In the case of Shopify, at one point building, an online store required hundreds of thousands of dollars and a bunch of skilled people. Now you can start a store for $20 in five minutes – 20 years ago, that was unfathomable.”

For Perry, Maple represents a path to that kind of shift in the economics of parenting and a network of family services, including goods, care, leisure and more. The startup has plans to eventually enlist other parents to provide services, which Perry says will unlock part-time income generation for full-time parents, allowing parents to help each other at the same time.

I asked him if he thought people would be reluctant to treat their family lives with the same kind of optimization approach favored by enterprise and commercial platform tools, but he suggested that in fact, not taking advantage of those same technologies in our personal lives is a missed opportunity.

“We believe that, uniquely, we’re living through a generation where we can start creating more time for people,” Perry said. “I think what makes Maple so unique is that no company has approached this by asking ‘How do we create more time for you so that you can spend more time with your kids?’ in the consolidated way that we have.”

Disclosure: I worked at Shopify from 2018 to 2019 while Perry was employed there, but we did not work together directly.

Office Remodeling: Things to Know as a Business Owner

Three Innovations Everyone Will Talk About in Ten Years