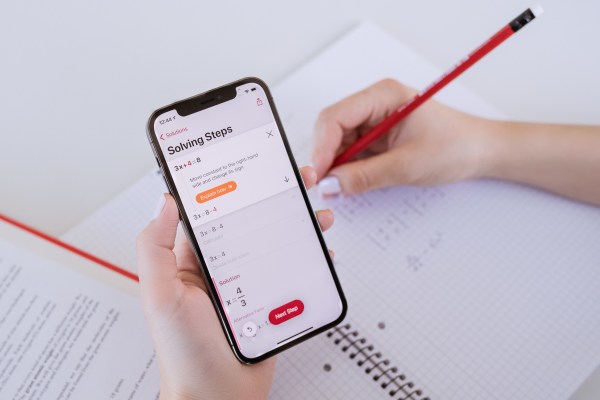 Photomath, the popular mobile app that helps you solve equations, has raised a $23 million Series B funding round led by Menlo Ventures. The app is a massive consumer success, and chances are you might already know about it if you have a teenager in your household.

The app lets you point your phone’s camera at a math problem. It recognizes what’s written and gives you a step-by-step explanation to solve the problem. You might think that it’s the perfect app for lazy students.

But there are many different use cases for Photomath. For instance, you can write an equation in your notebook and use Photomath to draw a graph.

Typing an equation on a keyboard is quite difficult. That’s why bridging the gap between the physical world and your smartphone is key to Photomath’s success. You can just grab a pen and write something down on a piece of paper. Essentially, it’s an AR calculator.

There’s an interesting story behind the app’s success. Photomath was originally designed as a demo app for another company called MicroBlink. At the time, the team was working on text recognition technology. It planned to sell its core technology to other companies that might find it useful.

In 2014, they pitched MicroBlink at TC Disrupt in London. And things changed drastically overnight as Photomath reached the first spot of the iOS App Store.

Photomath has now attracted more than 220 million downloads. As of this writing, it is still No. 59 in the U.S. App Store, one rank above Tinder. Other companies tried to build competitors, but it seems they didn’t manage to crush the tiny European startup.

The app seems even more relevant as many kids are spending more time studying at home. They can’t simply raise their hand to call on the teacher for some help.

Photomath is free and users can optionally pay for Photomath Plus, a premium version with more features, such as dynamic illustrations and animated tutorials.

8 Keys To Maximizing Your Confidence and Self-Esteem

3 invaluable founder lessons I learned on my immigration journey – TechCrunch