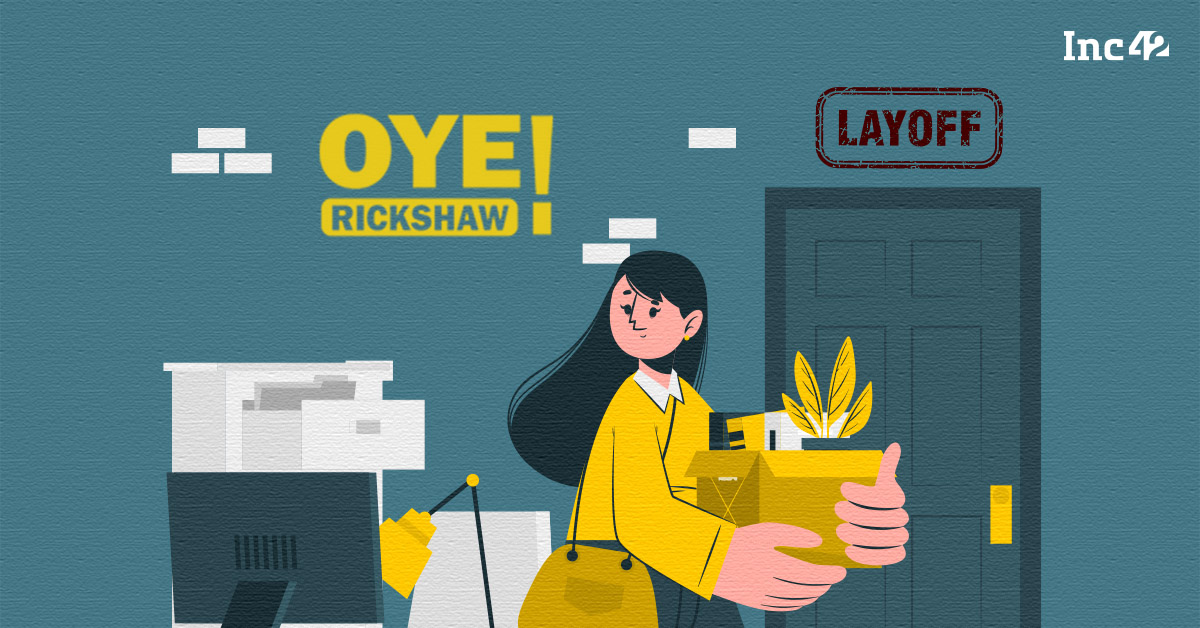 The startup has laid off employees from various teams including tech, marketing, sales, among others

Oye Rickshaw’s struggling ‘Ride business’ saw the maximum layoffs, and the startup is considering winding down the business, sources said

According to Inc42’s layoff tracker, Indian startups have laid off around 10,998 employees so far in 2022.

A spokesperson of the startup confirmed the development, saying it laid off 40 employees out of its total employee count of 200 across verticals. However, Oye Rickshaw attributed the layoffs to the market downturn.

Mohit Sharma, cofounder and CEO of Oye Rickshaw, in a statement said, “As we head towards a market downturn, we have had to make some difficult decisions to ensure the company continues to stay stable and achieve our mission of redefining India’s EV ecosystem. These current market developments have pushed us to make some hard decisions and re-look at structuring teams across verticals.”

“…it saddens me further that unfortunately, we had to part with some incredibly talented resources from the team. These are some of the most challenging times we have faced as a company and hope to collectively as an industry navigate the market,” he added.

In the future, with an improved market, the startup would look at getting some of the resources back on board, Sharma said.

However, sources told Inc42 that the startup has been witnessing a steady decline in its business, resulting in it resorting to layoffs to increase its runway.

The startup’s core business – Ride business – is making the highest losses. As a result, most of the laid off employees are from that vertical, the sources told Inc42.

1) Ride business: It is an e-rickshaw aggregator which enables customers to book e-rickshaws for their commute

The startup’s ‘Ride business’, which caught investors’ attention and brought funding to Oye Rickshaw, has been performing poorly, the sources added.

“Unlike cab and auto drivers, it is difficult to explain to e-rickshaw drivers about the app. You explain it today, they will forget it tomorrow,” said one person aware of the development, adding that the layoff count is higher than 40.

Another source added that instead of using the app, a commuter can simply get an e-rickshaw from the road.

The Oye Rickshaw ride app, which is still available on Google Play Store, is filled with negative reviews, with customers complaining about lack of e-rickshaws, bugs in the app, and various other issues.

The startup has significantly trimmed its workforce for the ride business and is considering winding down that business, the sources said.

However, the startup’s spokesperson rejected the claim that the ride business is seeing a slowdown.

“The ride business has been the primary business model for Oye! Rickshaw and we have scaled this business in last one year significantly big. We have expanded our ride business to 7 cities from just being operational in Delhi NCR and we have ambitious plans to expand it to 25 cities by the end of this year,” the spokesperson added.

The startup said it completed 70.45 Lakh rides in financial year 2021-22 (FY22) and expects the number to grow 340% to 2.37 Cr rides in FY23, adding that the current month-on-month growth rate gives it the confidence to achieve this target.

“So there is no question of scaling down the ride business in near future and the information about loss in this business is completely false,” the spokesperson added.

Apart from the ride business, the startup has also laid off some employees from its delivery and battery swapping business.

Oye Rickshaw’s battery swapping business is also facing difficulties as it is unable to buy new batteries due to a fund crunch. Inc42 has learnt that the startup is now looking to raise INR 40 Cr in debt to run day-to-day operations.

On the funding part, the spokesperson said that Oye Rickshaw has enough funds to keep its business running. He added that the startup is nearing the close of an equity funding round, but didn’t comment about the funding amount.

The employees laid off by Oye Rickshaw are from teams such as tech, sales, marketing, on-ground executives. The startup provided one-month salary as a severance pay to the impacted employees.

Oye Rickshaw, founded by Sharma and Akashdeep Singh in 2017, had raised $10 Mn in its Series A round from investors such as Matrix Partners, Chiratae Ventures, Pawan Munjal, Xiaomi, among others. The startup also raised INR 24 Cr in debt from Alteria Capital last year.

Oye Rickshaw has raised around $13 Mn till date. As per its website, the startup operates in Delhi, Gurugram, Noida, Karnal, and Ghaziabad.

The ongoing Russia-Ukraine war, rising inflation and tightening of monetary policies by central banks has resulted in a slowdown in the global economy. This has led to a decrease in funding for Indian startups, which has forced many of them to lay off employees. According to Inc42’s layoff tracker, Indian startups have laid off around 10,998 employees so far in 2022.

What’s the process for getting International Entrepreneur Parole? – TechCrunch

Caden launches with $3.4M to help consumers take control of their data – TechCrunch

test your business creativity with Edition 19 of our quiz!

The Startup Magazine 5 Tips For A Post-Pandemic Business Model

As Q2’s lull fades, unicorn IPOs are revving up – TechCrunch