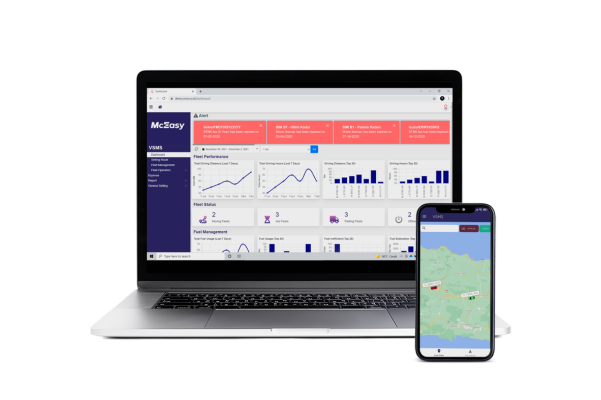 In Indonesia, many logistics providers still use old-fashioned systems to track their operations and fleets, including pen-and-paper ledgers. McEasy wants to change that. The startup, which develops software-as-a-service solutions for the logistics and supply chain industry, has raised $6.5 million in Series A funding led by East Ventures.

The startup was founded in 2017 by Raymond Sutjiono and Hendrik Ekowaluyo, and now serves more than 200 clients, including Cleo Pure Water, KMDI Logistics, MGM Bosco Logistics, Rosalia Indah and the Tanto Intim Line.

The new capital will be used on developing products for SMEs and establishing a stronger foothold in Indonesia’s Tier 2 and Tier 3 cities. McEasy says it has grown more than 12x in the past 18 months.

Sutjiono told TC that he met and became best friends with Ekowaluyo while both were studying mechanical engineering at Purdue University. The two then worked at Ford in structural engineering. Sutjiona said Ekowaluyo is an expert in structural design and program management in cars, while he focuses more on engine electronics, system control and data handling.

After returning to Indonesia, the two started McEasy to produce hybrid motorcycles. But after researching the market, they realized that the market was shifting to digital instead of hybrid bikes, so they came up with a smart tracker for motorcycles. But because the trackers were cost-prohibitive, they decided to do another shift to B2B logistics and automotive.

“B2B logistics players were still using the conventional method, and we wanted to make a digital solution to improve the business process,” said Sutjiono. “The logistics sector was chosen because of its promising potential and growth during the pandemic. Indonesia has more than 22.5 million units of passenger vehicles and more than 5 million units of freight cars.

The founders say that more than 85% of businesses in the transportation and supply chain sectors still use paper ledgers for their operations, including managing drivers, expenses, fuel consumption and route efficiency. To convince people to move from their legacy systems to McEasy, it offers a free trials and is growing its operations through word of mouth.”

In a prepared statement, East Ventures co-founder Willson Cuaca said, “McEasy has managed to accelerate positively in this post-pandemic environment. They combine the best of both worlds – logistics and technology – to elevate their offerings, strengthen their national footprints, and maintain profitability levels.”

Progcap Raises $25 Mn In Series B Round From Sequoia, Tiger Global

How To Scale Your Startup Far Beyond Organic Growth

How to Optimize Your Anchor Text Strategy For SEO