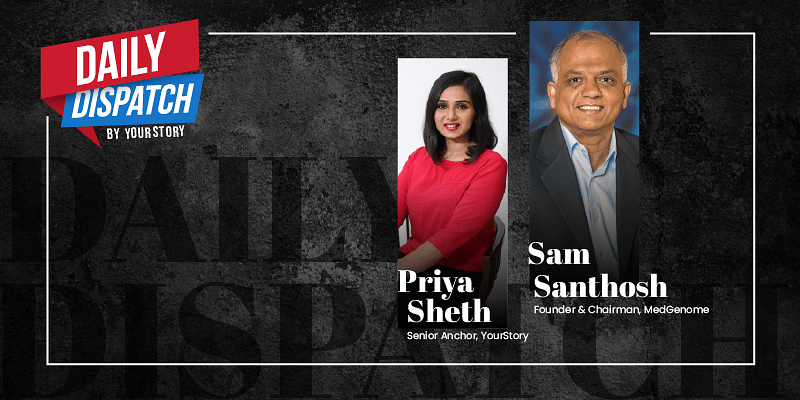 MedGenome — the India-based genetic diagnostics, research, and data company focused on expanding access for populations in South Asia and other emerging markets — is in the final stages to close a $30 million funding round from World Bank’s IFC.

In fact, the startup is eyeing a fundraise of $110-120 million in the coming months to expand testing infrastructure and capabilities.

In a conversation with YourStory’s Daily Dispatch, Sam Santhosh, Founder, Chairman, and Global CEO, MedGenome, said, “A large proportion of the funds raised would go towards building infrastructure for genetic testing as it is very expensive and requires several tools.”

In April 2020, the startup had raised $55 million in a Series D round led by Leapfrog Investments.

The startup claims it has already built the largest database of South Asian genetic variants through its leadership in genetic diagnostics in India, research partnerships, and work as a co-founding member with GenomeAsia 100K.

It has completed over 200,000 genomic tests to date and obtains samples from more than 550 hospitals and 6,000 clinicians across India.

However, since the beginning of the pandemic, it has not been a smooth ride for the startup. As hospitals only operated to cater to COVID-19 patients, MedGenome’s business took an obvious hit.

Following this, the startup pivoted and launched COVID-19 testing kits. While genome tests do not detect COVID-19 in humans, it helps to understand the virus strain or subsequent variants. These genome tests also provide insights into how a person’s genome contributes to the susceptibility of the virus.

According to MedGenome, the Indian genetic diagnostics market is expected to expand at a CAGR of 42 percent over the next five years. Globally, the market is expected to grow from $13 billion in 2019 to $28.5 billion by 2026 — driven by improving penetration, affordability, and increasing consumer awareness.

This year, the startup is launching Cardiogen — a test that will help a person understand their cardiac risk. It looks at six million data points of a person’s genome, and the algorithm checks if a person is at high risk of a cardiac problem.

While MedGenome primarily works with clinicians, Cardiogen will be supplied directly to customers and will be available pan-India.

Additionally, MedGenome will collaborate with cardiologists from across the country so that high-risk patients can immediately seek medical intervention.

“We will be launching it at the end of this month or early next month, and that will be one of the primary areas of growth for MedGenome,” the founder said.

“Maybe in two to three years, we might be big enough to go for an IPO,” Sam added.

We are trying to connect everyone in terms of data: Prem Bhatia of Graas

The future of training industry in the new normal

Why startups should focus on the last mile customer

[Product Roadmap] How this wellness startup is bringing AI, sensor technology to your yoga mat