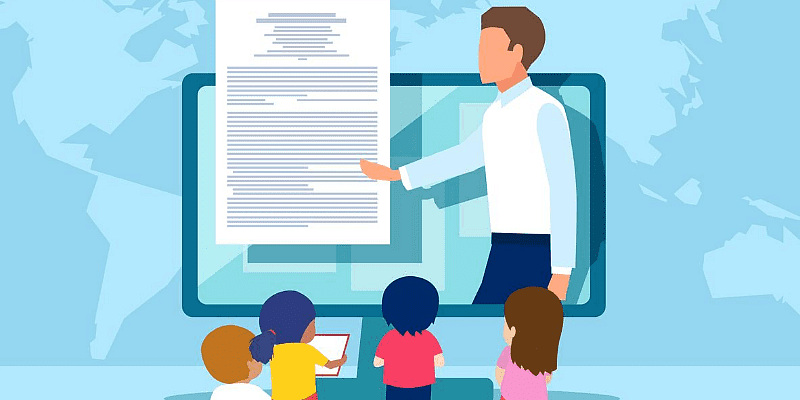 India’s folklore is littered with poignant stories of parents going to great lengths to finance their child’s education — from mortgaging houses and pawning jewellery to borrowing from local moneylenders, and sometimes even giving up on that dream.

Over the years, things may have improved slightly, but education continues to be out of bounds for a large section of the Indian population.

Sample these stats: Almost 30 percent of Indian families sell assets to fund their children’s education; 20 percent borrow from informal moneylenders at high rates per month; another 30 percent entirely give up on college education.

Traditionally, banks have offered education loans. But, due to rising loan defaults by students, banks have steadily cut down on education lending since 2018, as per RBI.

However, due to the rising cost of education and limited access to formal credit, the demand for education finance continues to soar. India’s edu-loans market is estimated to be worth $10 billion or more, according to Unitus Ventures. Currently, only five percent is serviced by organised lenders. Hence, the opportunity is huge.

In the last 18-24 months, a new crop of startups, digital lenders, and NBFCs have attempted to fill this void in the education finance space by offering flexible loans at low or zero interest rates, admissions and career counselling support, and a ‘Study Now, Pay Later’ option — an extension of fintech’s popular ‘Buy Now, Pay Later’.

A recent report by the IVCA and PGA Labs identified ‘fintech in education’ as one of the top five trends to watch out for in edtech. Education loan providers are said to be leading the ‘next wave of value creation’ in the sector, the report stated.

YourStory drew up a list of the top Indian startups in this segment.

Founded in 2016 by Varun Chopra (IIT Madras alumnus) and Raheel Shah (IIM Ahmedabad alumnus), Eduvanz has disbursed education loans worth Rs 300 crore to over 20,000 learners across 350+ Institutes in India.

The Mumbai-based startup wants to make education accessible to all learners across K-12, test prep, upskilling, and UG/PG courses by enabling them to apply for zero-interest loans through its ‘Study Now, Pay Later’ product.

It uses proprietary AI-based algorithms and predictive analytics to provide loans based on the future employability of learners. Eduvanz is also looking to expand its network of mentors and educational institutes, for which it acquired video-based career mentoring platform Klarity in November 2020.

Founded by Avinash Kumar and Mayank Batheja in 2017, Delhi-based Credenc serves as a ‘financial aid office’ for over 200 management colleges across 17 cities in India. It has approved loans worth over Rs 100 crore, servicing 200+ loan requests a day.

In late-2019, Credenc raised $2.5 million in a seed round led by Omidyar Network India, with participation from EMVC, Better Capital, and IIM-K Alumni Fund.

GyanDhan was founded in 2016 by IIT alumni Ankit Mehra and Jainesh Sinha as an educational financing marketplace for Indians students pursuing studies abroad. The Delhi-based startup has partnered with over 300 institutes and enabled 2,000+ loans through leading Indian banks. It also offers admission counselling and scholarships.

Following a $125,000 funding round led by US-based impact investor Gray Matters Capital in 2019, GyanDhan expanded its portfolio to include loans for skill-building courses. It plans to disburse 45,000 skill-building loans by 2021 through its lending partners by using a proprietary student employability assessment framework.

The platform is also creating a ranking of vocational training institutes in India, and developing behavioural scorecards to assess the loan applicant’s willingness to pay.

The San Francisco and Bengaluru-based edu-fintech startup’s target segment includes students who look to pursue undergraduate degrees in the US.

Leap Finance has partnered with 150 colleges in the US to help Indian students avail education loans at interest rates starting at 8 percent — less than half the rates they pay lenders in the US. The startup is looking to finance 1,000 students this fall.

Leap Finance has raised $5.5 million in a round led by Sequoia India, and top angels such as Kunal Shah (Founder of CRED) and Bhupinder Singh (Founder of InCred).

Founded in 2017 by ex-bankers and consultants, Bibhu Prasad Das, Victor Senapaty, and Brijesh Samantaray, Propelld goes beyond CIBIL scores and present-day creditworthiness to evaluate students based on their future income potential.

The Bengaluru-based startup offers flexible education finance products, including fee payment in up to 24 monthly instalments, loan for 80 percent of the course fee, moratoriums on principal amount, repayment cycles of up to eight months, etc.

Propelld has partnered with over 150 educational institutes across the country and extended loans to more than 1,500 students. It raised Rs 15 crore from Stellaris Venture Partners and India Quotient in 2019. The startup plans to use the capital to expand its base of institutes and student network by 10X by 2021-end.

Finwego calls itself a neo-banking platform for education. It was founded in 2018 by the husband-wife duo of Pavee Ramanisankar and Shiv Vadivelalagan, after being incubated at Harvard. It earned a grant of $25,000 from Harvard Innovation Labs.

Unlike most edufin startups that target students, Finwego offers loans to the school management, teachers, vendors, tutors, and other staff for their working capital needs that can range from buying two-wheelers to upskilling to family expenses.

The Chennai-based startup has disbursed loans to 3,500 institutions, primarily in Karnataka, Tamil Nadu, and Puducherry. Finwego also offers a white-labeled app to educational institutions that can help them stay connected with the student community, collect fees digitally, manage admissions, payroll, expenses, and so on.

The startup is backed by Elevation Capital (earlier SAIF Partners), which led a $1.7 million seed round in 2019. Some HNIs and angels also participated in the round.

Founded in 2017 by Rishab Mehta and Rahul Mehta, GrayQuest enables over 7 lakh students with access to formal credit. It also serves as a source of liquidity and fee collection platform for 250-odd partner institutions, including schools and colleges.

The Mumbai-based startup’s target market is the 100 million-plus learners, who enroll in private educational institutions annually.

GrayQuest’s ‘Study Now, Pay Later’ product gives parents the option of paying their children’s annual fees in up to 12 monthly installments — as opposed to paying in bulk — without any extra costs.

GrayQuest raised a pre-Series A round of $1.2 million led by Foundation Holdings in 2020. A bunch of well-known family offices also participated in the funding round. It claims to have on-boarded 650+ institutions in the pandemic alone.

Founded in 2008 by Samir Mehra, ISFC is one of the oldest education lenders in India. It operates like an NBFC that lends to private schools, affordable schools, vocational colleges and institutes, coaching centres, and individual teachers.

The Hyderabad-based company looks to disburse loans worth $100 million over the next two years through its K-12 partner network of 15,000 schools.

Last August, ISFC raised $30 million in a mix of equity and debt from Gray Matters Capital. InCred, U GRO, and Profectus Capital also participated in the round. At the same time, ISFC also appointed veteran banker Sandeep Wirkhare as its MD and CEO.

GoAir, now Go First, could launch its IPO in August; SEBI nod to come in July