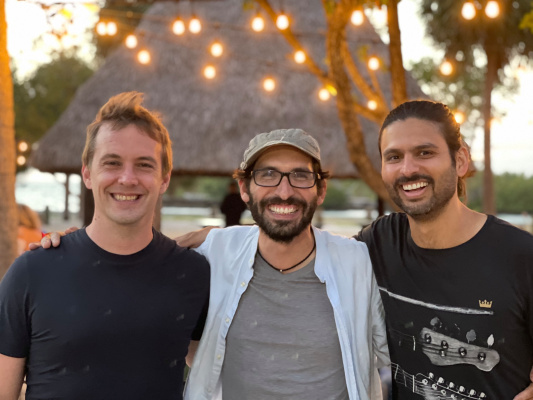 Here in the U.S. the concept of using driver’s data to decide the cost of auto insurance premiums is not a new one.

But in markets like Brazil, the idea is still considered relatively novel. A new startup called Justos claims it will be the first Brazilian insurer to use drivers’ data to reward those who drive safely by offering “fairer” prices.

And now Justos has raised about $2.8 million in a seed round led by Kaszek, one of the largest and most active VC firms in Latin America. Big Bets also participated in the round along with the CEOs of seven unicorns including Assaf Wand, CEO and co-founder of Hippo Insurance; David Velez, founder and CEO of Nubank; Carlos Garcia, founder and CEO Kavak; Sergio Furio, founder and CEO of Creditas; Patrick Sigris, founder of iFood and Fritz Lanman, CEO of ClassPass. Senior executives from Robinhood, Stripe, Wise, Carta and Capital One also put money in the round.

“While we have been friends for a while, it was a coincidence that all three of us were thinking about building something new in Latin America,” Chadha said. “We spent two months studying possible paths, talking to people and investors in the United States, Brazil and Mexico, until we came up with the idea of creating an insurance company that can modernize the sector, starting with auto insurance.”

Ultimately, the trio decided that the auto insurance market would be an ideal sector considering that in Brazil, an estimated more than 70% of cars are not insured.

The process to get insurance in the country, by any accounts, is a slow one. It takes up to 72 hours to receive initial coverage and two weeks to receive the final insurance policy. Insurers also take their time in resolving claims related to car damages and loss due to accidents, the entrepreneurs say. They also charge that pricing is often not fair or transparent.

Justos aims to improve the whole auto insurance process in Brazil by measuring the way people drive to help price their insurance policies. Similar to Root here in the U.S., Justos intends to collect users’ data through their mobile phones so that it can “more accurately and assertively price different types of risk.” This way, the startup claims it can offer plans  that are up to 30% cheaper than traditional plans, and grant discounts each month, according to the driving patterns of the previous month of each customer.

“We measure how safely people drive using the sensors on their cell phones,” Chadha said. “This allows us to offer cheaper insurance to users who drive well, thereby reducing biases that are inherent in the pricing models used by traditional insurance companies.”

Justos also plans to use artificial intelligence and computerized vision to analyze and process claims more quickly and machine learning for image analysis and to create bots that help accelerate claims processing.

“We are building a design driven, mobile first and customer experience that aims to revolutionize insurance in Brazil, similar to what Nubank did with banking,” Chadha told TC. “We will be eliminating any hidden fees, a lot of the small text and insurance specific jargon that is very confusing for customers.”

Justos will offer its product directly to its customers as well as through distribution channels like banks and brokers.

“By going direct to consumer, we are able to acquire users cheaper than our competitors and give back the savings to our users in the form of cheaper prices,” Chadha said.

Customers will be able to buy insurance through Justos’ app, website, or even WhatsApp. For now, the company is only adding potential customers to a waitlist but plans to begin selling policies later this year..

During the pandemic, the auto insurance sector in Brazil declined by 1%, according to Chadha, who believes that indicates “there is latent demand rearing to go once things open up again.”

Justos has a social good component as well. Justos intends to cap its profits and give any leftover revenue back to nonprofit organizations.

The company also has an ambitious goal: to help make insurance become universally accessible around the world and the roads safer in general.

“People will face everyday risks with a greater sense of safety and adventure. Road accidents will reduce drastically as a result of incentives for safer driving, and the streets will be safer,” Chadha said. “People, rather than profits, will become the focus of the insurance industry.”

Justos plans to use its new capital to set up operations, such as forming partnerships with reinsurers and an insurance company for fronting, since it is starting as an MGA (managing general agent).

It’s also working on building out its products such as apps, its back end and internal operations tools as well as designing all its processes for underwriting, claims and finance. Justos’ data science team is also building out its own pricing model.

The startup will be focused on Brazil, with plans to eventually expand within Latin America, then Iberia and Asia.

Kaszek’s Andy Young said his firm was impressed by the team’s previous experience and passion for what they’re building.

“It’s a huge space, ripe for innovation and this is the type of team that can take it to the next level,” Young told TC. “The team has taken an approach to building an insurance platform that blends being consumer centric and data driven to produce something that is not only cheaper and rewards safety but as the brand implies in Portuguese, is fairer.”

You better back your SaaS up – TechCrunch