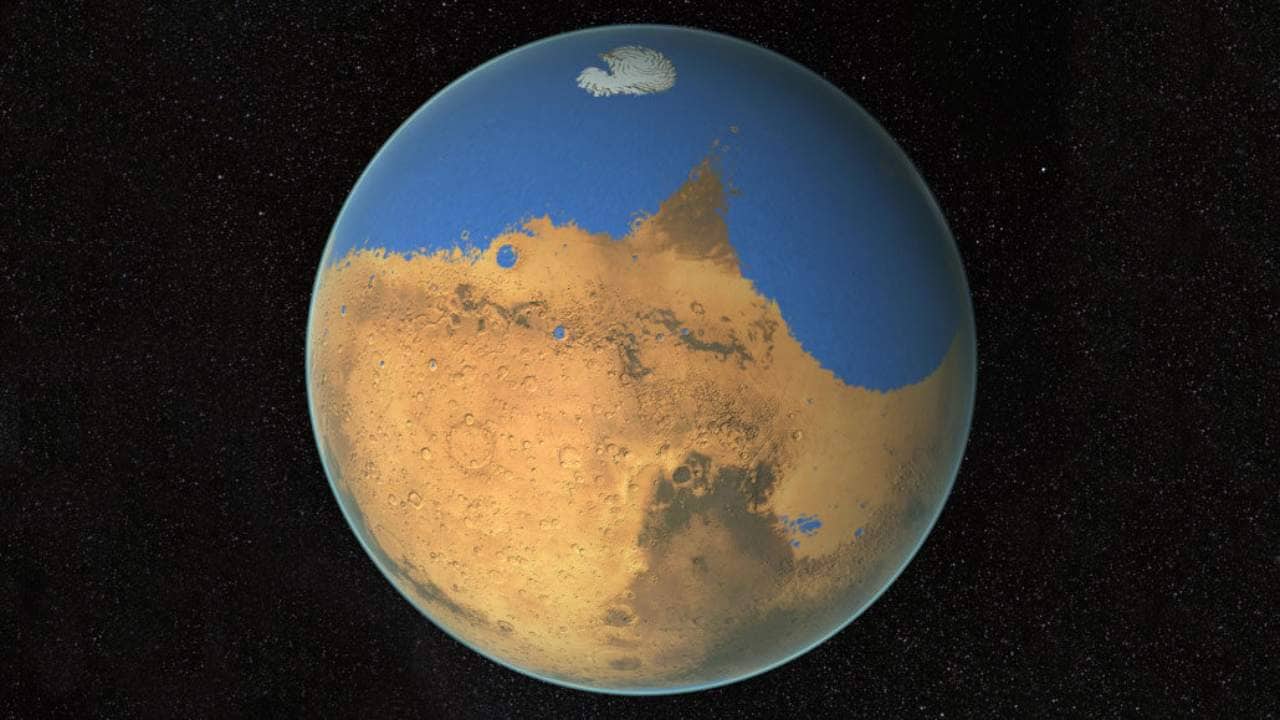 Vast amounts of ancient water may have been trapped beneath the surface of Mars, according to a NASA-funded study which challenges the current theory that the Red Planet’s water escaped into space. Evidence found on the surface of Mars suggests that abundant water flowed across Mars billions of years ago, forming pools, lakes, and deep oceans, and where did all that water go has been a matter of investigation. The new study, published in the journal Science, shows that a significant portion of Mars’s water – between 30 and 99 percent – is trapped within minerals in the planet’s crust. The researchers from California Institute of Technology and NASA’s Jet Propulsion Laboratory (JPL) found that around four billion years ago, Mars was home to enough water to have covered the whole planet in an ocean about 100 to 1,500 metres deep.

However, a billion years later the planet was as dry as it is today.

Previously, scientists seeking to explain what happened to the flowing water on Mars had suggested that it escaped into space due to Mars’s low gravity. Though some water did indeed leave Mars this way, it now appears that such an escape cannot account for most of the water loss, the researchers said.

“Atmospheric escape doesn’t fully explain the data that we have for how much water actually once existed on Mars,” said Caltech PhD candidate Eva Scheller, lead author of a paper on the research.

The team studied the quantity of water on Mars over time in all its forms – vapour, liquid and ice – and the chemical composition of the planet’s current atmosphere and crust. They did so through the analysis of meteorites as well as using data provided by Mars rovers and orbiters, looking in particular at the ratio of deuterium to hydrogen.

Water is made up of hydrogen and oxygen: H2O. Not all hydrogen atoms are created equal, however. There are two stable isotopes of hydrogen – deuterium and hydrogen. The lighter-weight hydrogen has an easier time escaping the planet’s gravity into space than its heavier counterpart, according to the researchers. Because of this, the escape of a planet’s water via the upper atmosphere would leave a telltale signature on the ratio of deuterium to hydrogen in the planet’s atmosphere, and there would be an outsized portion of deuterium left behind, they said. However, the researchers noted that the loss of water solely through the atmosphere cannot explain both the observed deuterium to hydrogen signal in the Martian atmosphere and large amounts of water in the past.

The study proposes that a combination of two mechanisms – the trapping of water in minerals in the planet’s crust and the loss of water to the atmosphere – can explain the observed deuterium-to-hydrogen signal within the Martian atmosphere.

The researchers said that when water interacts with rock, chemical weathering forms clays and other hydrous minerals that contain water as part of their mineral structure, a process that occurs on Earth as well as on Mars.

Since Earth is tectonically active, old crust continually melts into the mantle and forms new crust at plate boundaries, recycling water and other molecules back into the atmosphere through volcanism, they said.

Mars, however, is mostly tectonically inactive, and so the “drying” of the surface, once it occurs, is permanent, according to the researchers.

“Atmospheric escape clearly had a role in water loss, but findings from the last decade of Mars missions have pointed to the fact that there was this huge reservoir of ancient hydrated minerals whose formation certainly decreased water availability over time,” said Bethany Ehlmann, associate director for the Keck Institute for Space Studies.

“All of this water was sequestered fairly early on, and then never cycled back out,” Eva Scheller added.

Five new shrub frog species have been discovered in the Western Ghats as part of a decade long study- Technology News, FP

Why does Russia want Ukraine so badly? Here’s what a geography book tells us