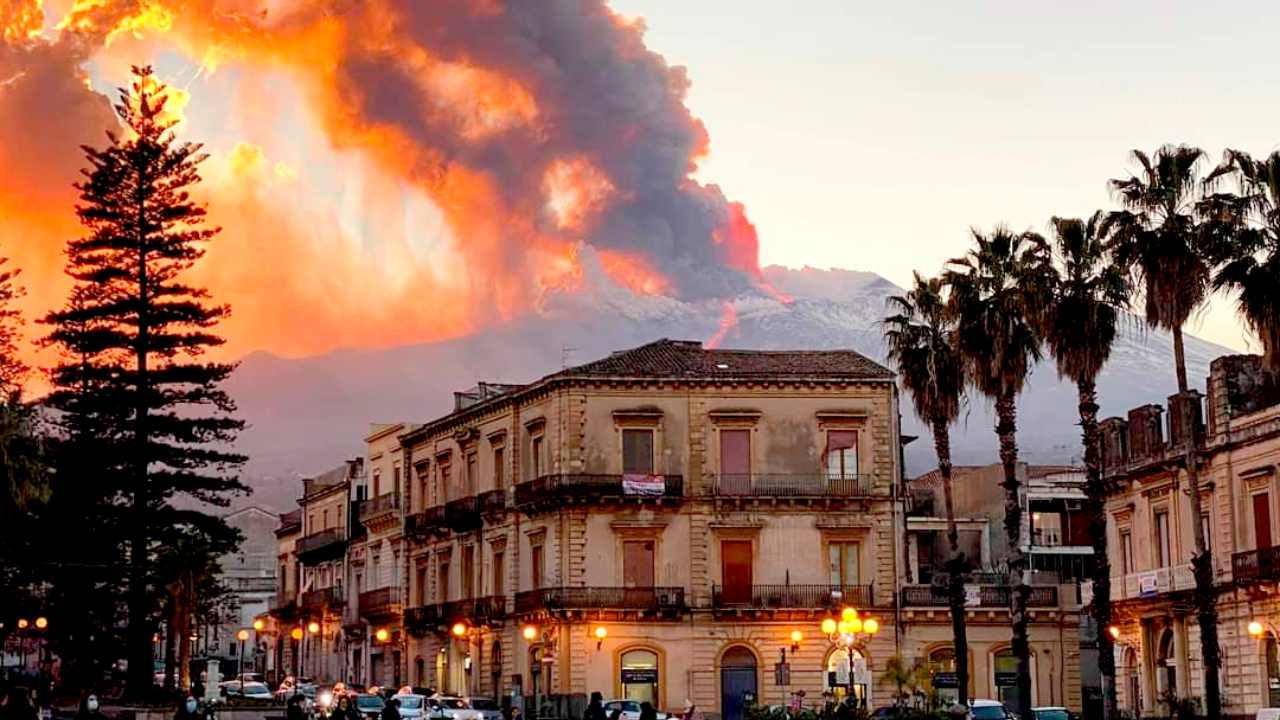 Mount Etna, the volcano that towers over eastern Sicily, evokes superlatives. It is Europe’s most active volcano and also the continent’s largest. And the fiery, noisy show of power it puts on for days or weeks, even years every so often, is always super spectacular. Fortunately, Etna’s latest eruption captivating the world’s attention has caused neither injuries nor evacuation. But each time it roars back into dramatic action, it wows onlookers and awes geologists who spend their careers monitoring it’s every quiver, rumble and belch. On 16 February, Etna erupted, sending up high fountains of lava, which rolled down the mountain’s eastern slope toward the uninhabited Bove Valley, which is five kilometres (three miles) wide and eight kilometres (five miles) long. The volcano has belched out ash and lava stones that showered the southern side.

The activity has been continuing since, in bursts more or less intense. The flaming lava lights up the night sky in shocking hues of orange and red. There’s no telling how long this round of exciting activity will last, say volcanologists who work at the Etna Observatory run by the National Institute of Geophysics and Volcanology.

While public fascination began with the first dramatic images this month, the explosive activity began in September 2019, becoming much stronger two months ago. The current activity principally involves the south-east crater, which was created in 1971 from a series of fractures.

Etna towers 3,350 meters (around 11,050 feet) above sea level and is 35 kilometres (22 miles) in diameter, although the volcanic activity has changed the mountain’s height over time.

Occasionally, the airport at Catania, eastern Sicily’s largest city, has to close down for hours or days, when ash in the air makes flying in the area dangerous. Early in this recent spell of eruptive activity, the airport closed briefly.

But for pilots and passengers flying to and from Catania at night when the volcano is calmer, a glimpse of fiery red in the dark sky makes for an exciting sight.

Living with a volcano

With Etna’s lava flows largely contained to its uninhabited slopes, life goes in towns and villages elsewhere on the mountain. Sometimes, like in recent days, lava stones rain down on streets, bounce off cars and rattle roofs.

But many residents generally find that a small inconvenience when weighed against the benefits the volcano brings. Lava flows have left fertile farmland. Apple and citrus trees flourish. Etna red and whites are some of Sicily’s most popular wines, from grapes grown on the volcanic slopes.

Tourism rakes in revenues. Hikers and backpackers enjoy views of the oft-puffing mountain and the sparkling Ionian Sea below. For skiers who want uncrowded slopes, Etna’s a favourite.

It can be deadly

Inspiring ancient Greek legends, Etna has had scores of known eruptions in its history. An eruption in 396 B.C. has been credited with keeping the army of Carthage at bay.

In 1669, in what has been considered the volcano’s worst known eruption, lava buried a swath of Catania, about 23 kilometres (15 miles) away and devastated dozens of villages. An eruption in 1928 cut off a rail route circling the mountain’s base.

More recently, in 1983, dynamite was used to divert lava threatening inhabited areas. In 1992, the army built an earthen wall to contain the lava, flowing from Etna for months, from hitting Zafferana Etnea, a village of a few thousand people. At one point, the smoking lava stopped two kilometres (just over a mile) from the edge of town.

Over the last century, a hiccup in geological time, low-energy explosive eruptions and lava flows, both fed from the summit and side vents, have characterized Etna.

Also read: Sicilians ‘not worried’ that Mount Etna is erupting as they have ‘seen worse’