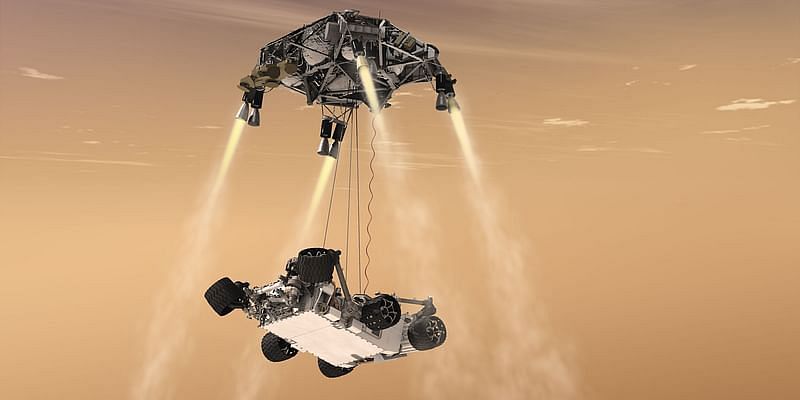 After a journey that lasted 203 days, NASA’s Mars rover, Perseverance, has successfully landed on the Martian grounds. Claimed to be one of the most advanced rovers, Perseverance’s key objective is astrobiology, including the search for signs of ancient microbial life.

Indian origin scientist Dr. Swati Mohan, who was leading the development of attitude control and the landing system for the rover, confirmed Perseverance’s successful landing. “Touchdown confirmed! Perseverance is safely on the surface of Mars, ready to begin seeking the signs of past life,” she exclaimed.

Nicknamed Percy, the Mars rover will investigate the rock and sediment of Jezero Crater’s ancient lakebed and river delta to characterise the region’s geology and past climate. It will also look for signs of microbial life on Mars.

The car-sized, plutonium-powered vehicle landed at Jezero Crater, on an ancient river delta full of pits, cliffs, and rocks, making it one of the most difficult landing areas on Mars. According to the official statement, scientists believe that 3.5 billion years ago, the crater had its own river delta and was filled with water.

“The mission itself personifies the human ideal of persevering toward the future, and will help us prepare for human exploration of the Red Planet,” acting NASA Administrator Steve Jurczyk said in a statement.

The Mars 2020 mission was launched July 30, 2020 from Cape Canaveral Space Force Station in Florida. Over a period of seven months, Percy traveled 293 million miles (472 million km) to land on the red planet.

According to NASA, the Mars rover is the first mission which is aimed at collecting Martian rock and regolith, paving the way for human exploration of the Red Planet. A PTI report revealed that the space agency is looking to bring the sample back to Earth as early as 2031.

“Perseverance is the most sophisticated robotic geologist ever made, but verifying that microscopic life once existed carries an enormous burden of proof. While we’ll learn a lot with the great instruments we have aboard the rover, it may very well require the far more capable laboratories and instruments back here on Earth to tell us whether our samples carry evidence that Mars once harbored life,” said Lori Glaze, director of NASA’s Planetary Science Division.

The space agency revealed that Mars Sample Return mission is being planned in collaboration with European Space Agency (ESA). As a part of this, a spacecraft will be sent to Mars for collecting the samples from the surface and return them to Earth for in-depth analysis.

The samples will allow scientists to study and search for definitive signs of past life on Mars.

“This rover is blazing its own path and daring new challenges in the surface mission. We built the rover not just to land, but to find and collect the best scientific samples for return to Earth, and its incredibly complex sampling system and autonomy not only enable that mission, they set the stage for future robotic and crewed missions,” JPL Director Michael Watkins explained.

According to NASA, the 1,026-kilogram robotic geologist and astrobiologist, Percy, will undergo several weeks of testing before it begins its two-year science investigation of Mars’ Jezero Crater.

Scientists have claimed that Percy is one of the most advanced and sophisticated rovers. Percy is equipped with Mastcam-Z, a pair of zoomable science cameras on its remote sensing mast which is creating high-resolution, colour 3D panoramas of the Martian landscape. Apart from this, a SuperCam has been installed on its mast which uses a pulsed laser to study the chemistry of rocks and sediment.

The rover also includes a Planetary Instrument for X-ray, Lithochemistry (PIXL), and the Scanning Habitable Environments with Raman & Luminescence for Organics & Chemicals (SHERLOC) which will work together to collect data on Mars’ geology close-up.

“With an eye on future Red Planet explorations, the Mars Oxygen In-Situ Resource Utilization Experiment (MOXIE) technology demonstration will attempt to manufacture oxygen out of thin air – the Red Planet’s tenuous and mostly carbon dioxide atmosphere. The rover’s Mars Environmental Dynamics Analyzer (MEDA) instrument, which has sensors on the mast and chassis, will provide key information about present-day Mars weather, climate, and dust,” NASA said in a statement.

Apart from this, a diminutive Ingenuity Mars Helicopter is attached to Percy. It is a technology demonstration that will attempt the first powered, controlled flight on another planet.

NASA’s Perseverance rover marks Earth’s third visit to Mars in just over a week after two spacecraft from the United Arab Emirates and China entered into orbit around Mars last week.

With this mission, Earthians will be more close to finding life on another planet. “Perseverance is more than a rover and more than this amazing collection of men and women that built it and got us here. This mission is about what humans can achieve when they persevere, ” said John McNamee, project manager of the Mars 2020 Perseverance rover mission.

Vaccine designed to reduce complexity and seriousness of COVID-19, not cure it, says Dr Jagdish C