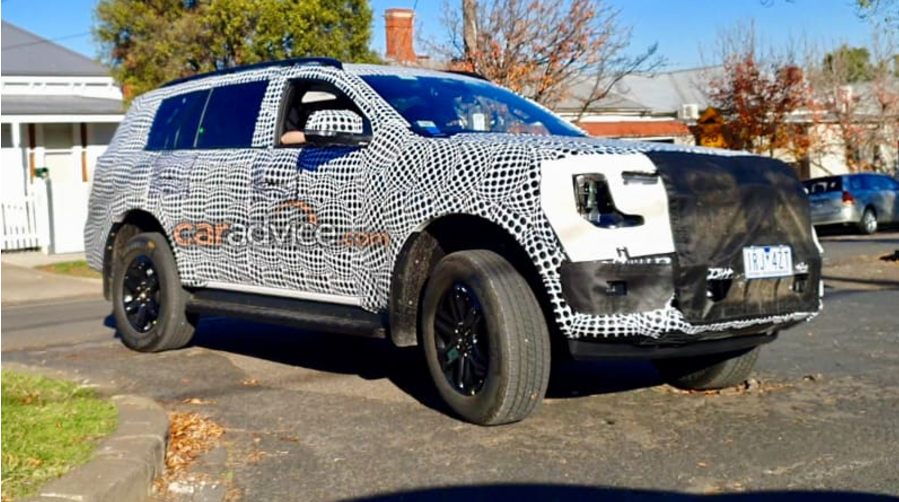 The next-gen Ford Endeavour has been spotted undergoing testing in Australia ahead of its global debut by early next year. The Endeavour, termed the Everest in most other markets, is expected to continue with its ladder-frame construction in its third generation, shared with the Ranger pick-up. Notably, Volkswagen will collaborate with Ford to create its version of a rugged SUV/pick-up based on the new Endeavour’s underpinnings. The 2022 Ford Endeavour is expected to continue with the same ladder-frame structure as seen on the current SUV since 2014. But this is expected to be heavily reworked to improve rigidity and to accommodate newer electrified powertrains and more stringent safety norms. While it will continue with its ladder-frame construction, the 2022 Ford Endeavour will feature several chassis upgrades. Image: CarAdvice

The images suggest the new Ford Endeavour will grow in size and adopt some angular edges, in keeping with Ford’s newest design trends. The big change is to the face though, which now seems heavily influenced by Ford’s F-Series pick-up trucks. The new Endeavour seems to sport large C-shaped LED headlights and an oversized grille in an arrangement like that seen on Ford’s popular trucks. The rear is more sharply defined now, with a more sharply raked windscreen and large vertical tail-lights.

The interiors haven’t been shown yet, but some F-150 influences can be expected in there as well. There should be a slew of connectivity features, larger screens, a digital driver’s display and quite a few touches to improve in-cabin practicality. The next-gen Ford Endeavour is also expected to get a 3.0-litre V6 diesel engine. Image: CarAdvice

The primary engine option will continue to be the 2.0-litre single-turbo diesel that makes 170 hp/420 Nm and the twin-turbo version that puts out 213 hp and 500 Nm. Reports suggest there will also be a hybrid version in certain markets, as well as a range-topping 3.0-litre V6 diesel. These engines should pair with a 10-speed automatic transmission.

The new-generation Ford Endeavour should launch in international markets like Australia and Thailand by early 2022, followed by an India launch later in the year. Prices should see a five to ten percent increase over the current version, which currently starts at Rs 29.99 lakh (ex-showroom). The Ford Endeavour competes with the likes of the Toyota Fortuner, MG Gloster and Isuzu MU-X.

Yahoo Answers is shutting down and all its archives will be wiped off on 4 May- Technology News, FP

GB WhatsApp, a third-party app, has gone viral but it can get your original WhatsApp account permanently blocked- Technology News, FP