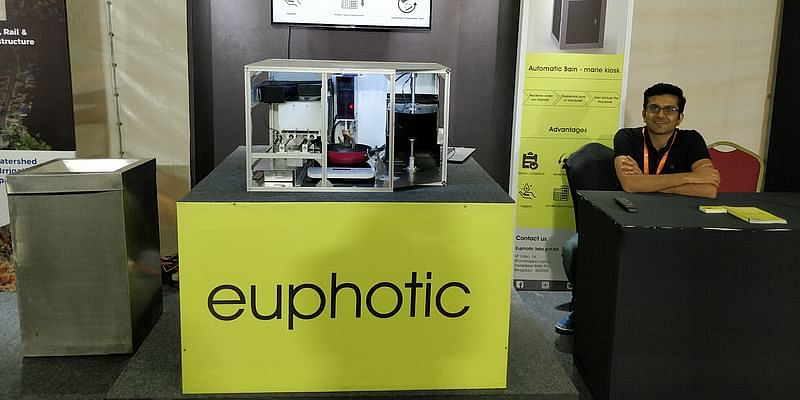 When we think of home, many of us remember our parents cooking their signature dishes. But with our lives becoming busier than ever, cooking food has taken a backseat. This is where Bengaluru-based Euphotic Labs has stepped in with a solution.

“Our vision is to make the food experience seamless so that everyone can have freshly cooked food as per their taste preference, work schedule, and health requirement,” Yatin Varachhia, Co-founder of Euphotic Labs, tells YS.

No time to cook

It all started with the classic urban problem, that is, having no time to cook.

Hailing from Kantva, a small village in Gujarat, Yatin went to Bengaluru in 2008 to pursue a Master’s in Technology from the Indian Institute of Science. This was when he first started living away from home, however, did not like the food he was eating.

He would crave home-cooked food even when he got married and continued to stay in Bengaluru.

The working couple found themselves busy and did not get time to cook their favourite dishes or find a cook who could match their taste.

A hardware expert who previously built a motion camera that was sold in more than 23 countries, Yatin had always been interested in product development. So, he started thinking of building a product that could solve his food problem.

To understand the problem better, Yatin surveyed his friends in Bengaluru and the US and found that more than half of them face challenges when it comes to managing their food. “Some complained about upset stomachs after eating restaurant food, some said they hate to wait for delivery, some hate cooking, while others just eat ready-to-cook or frozen food, and so on,” tells Yatin.

Yatin, who did not like the corporate life and was bitten by the entrepreneurial bug, decided to quit his job and start Euphotic Labs in 2018 with three engineers to build Nosh. Later, Pranav Raval, Amit Gupta, and Sudeep Gupta came together as co-founders, as they “believed in the potential of the product.”

“Our single goal of serving healthy and homely food and making eating hassle-free in every home brought us together when we were introduced through common friends who knew about Nosh,” tells Pranav.

While Pranav comes with more than 25 years of experience in the consumer durable industry, having worked with Hitachi and Bosch & Siemens (BSH), Amit is an ISB Hyderabad and NIT Raipur alumnus, who worked in marketing at AB InBev and was an early employee of Mu Sigma and Value Edge (acquired by WNS). Sudeep is a BITS Pilani and Georgia Tech alumnus with a background in system design engineering background and has worked at Broadcom.

To use the robot, users have to put the ingredients in the box-shaped robot – such as water, oil, and spices are already stocked in — and punch the name of the dish they want the robot to cook.

Amit says that the startup made artificial intelligence a key feature of Nosh, as there is an AI-enabled camera embedded in the robot, which is programmed to add ingredients in a sequence that a human would. For example, adding other veggies only after onions turn golden-brown. He also says that a user can customise the taste, such as making the dish less spicy, adding less salt, and more.

It took the team three years, six prototypes, numerous recipe iterations, and countless user feedbacks to develop the final product. Yatin recalls the first dish prepared by Nosh towards the end of 2018 was potato fry, and the team loved the taste.

“With Nosh, users can plan their meals, order groceries in-app from the automated grocery list and cook any dish, track calories, customise dishes to their taste and build new recipes,” Yatin adds.

Treading uncharted waters, Yatin says that Nosh is a new category product, which means “there is no product we can directly refer to and learn from.”

“As a result, we go through a cycle of extreme experimentation, failure, evolution, and adoption. Add to that the nascent Indian hardware ecosystem with very few successful indigenous hardware startups,” he says.

Amid all this, the pandemic has not made it any easier for the team in terms of taking the product to consumers, conducting events, user trials, and product development.

Euphotic Labs is currently focused on India and the millions of Indians living abroad who crave freshly home-cooked food with convenience. “The idea is to deliver the best possible experience to Indians across the world, starting from the US and India, and then expanding to other consumers such as Asian-Americans, as well as other geographies, such as the UK, Singapore, Australia, etc.,” tells Amit.

According to the founders, though the B2C cooking ecosystem has evolved, our home kitchens still involve a lot of human intervention and lack deep technology. “In India, households opt for cooks, which is not a viable option for Indians living abroad. That’s why we are building a new category product combining AI, food sciences, and robotics,” adds Yatin.

Speaking about the competition, Amit says the product comes with a unique USP “such as AI-based cooking rather than time-based cooking to replicate homely food, taste customisation to cater to taste preferences, and a recipe-building app to enable home chefs to not just cook conveniently but also disseminate their recipes.”

Investments and the road ahead

Nosh got its first customer while Yatin was raising funds and was talking to his friend Mohammadi about the problem he was working on. “Mohammadi was really excited about what we are building and wanted to have the product in his life. He invested Rs 5 lakh in the company in his personal capacity and also became the first customer,” tells Yatin.

Yatin initially invested Rs 5 lakh in the company. Besides this, it raised about Rs 25 lakh from friends and family, and has also received funding of Rs 40 lakh from the Society for Innovation and Entrepreneurship (SINE), IIT Delhi.

The company is currently manufacturing 1,000 units of Nosh in Bengaluru and plans to proceed to mass manufacturing based on its order book.

Going ahead, Yatin shares that Nosh aims to become a cooking platform providing fresh home-cooked food with convenience at every stage of the cooking journey.

“Nosh has come to life with a promise that no matter where you live, you can get freshly cooked food that tastes just like home,” adds Sudeep.

Car-sharing startup Turo has filed confidentially for an IPO – TechCrunch

3 Reasons Mobile-Minded Marketing Is More Important Than Ever