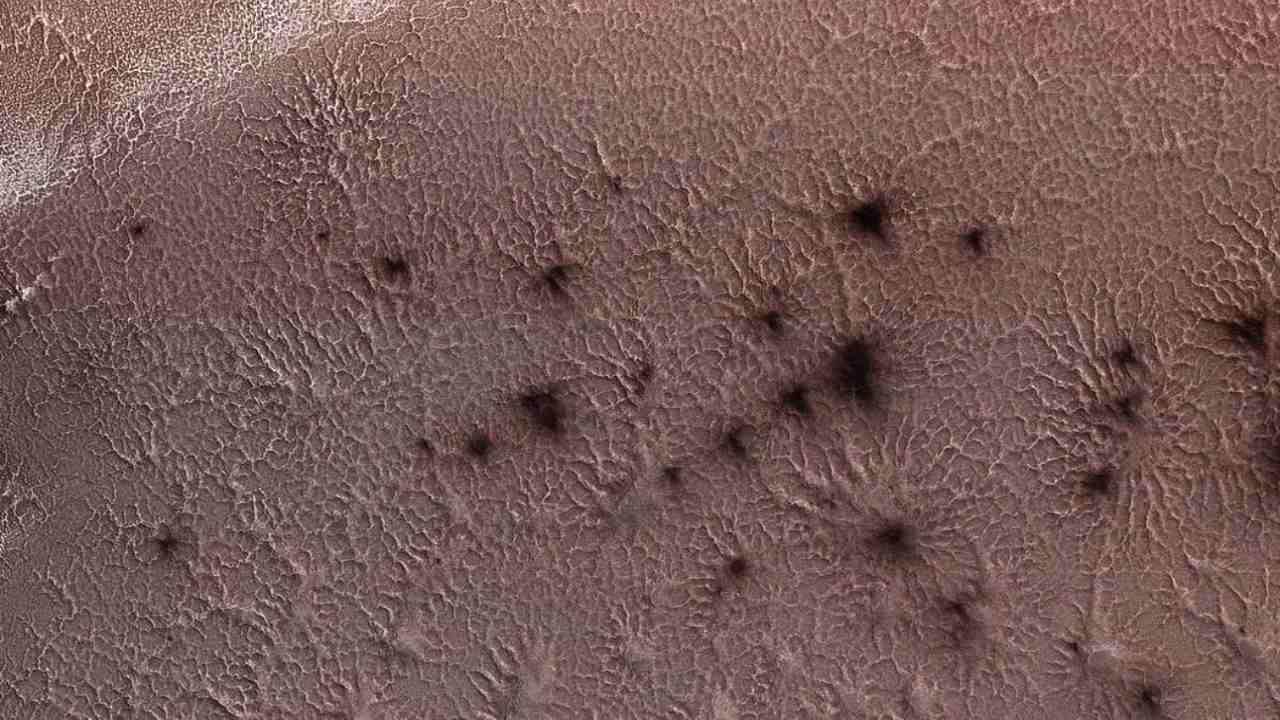 A team of scientists has found an explanation for the formation of ‘spider’-like structures on the surface of Mars. These dark, spider-like branching troughs known as ‘araneiforms’ are found only in the southern polar region of Mars. New research points to these formations being the first physical evidence of frozen carbon dioxide sublimating on Mars, i.e., going straight from its frozen solid state to vapour state. Araneiforms were earlier thought to form by sublimation, and have now been confirmed to, using simulations of Martian conditions in a lab. Researchers from Ireland and the UK reportedly simulated their formation using the Open University Mars Simulation Chamber.

Araneiforms are not found on Earth, and are believed to be carved into the Martian surface by dry ice that changes directly from solid to gas (sublimating) in the spring. Mars’ atmosphere, unlike Earth’s, comprises mainly carbon dioxide. As temperatures decrease in the winter, atmospheric CO2 is deposited on the surface as CO2 frost and ice, according to a statement by Trinity College Dublin. The findings from the study, carried out by researchers at The Open University, Trinity College, and Durham University, were published in the peer-reviewed journal Scientific Reports. The simulation involved an experiment using CO2 ice blocks, which scientists drilled holes into, and suspended above different kinds of gravel, ranging from course to fine. These surfaces were made to resemble that of Mars by lowering the temperature and pressure inside a vacuum chamber before the ice blocks were lowered to touch the surface. Almost instantly, the blocks began to vaporize, and left behind a plume of gaseous carbon dioxide. These CO2 blocks sublimated and left spider-like impressions on the surface, according to the study, akin to Araneiforms on Mars.

The explanation researchers proposed for the process is Kieffer’s hypothesis, which states that the ground beneath heats up when spring arrives, causing sublimation of the ice. When the pressure created by the gas escapes, it leaves an impression on the surface, which in this case, resembles spiders. So far, it has not been known if such a theoretical process is possible, and the process has never been directly observed on Mars.

The Open University researcher Lauren McKeown said, speaking of their research, that the findings were exciting, having contributed empirical evidence for a process that has a widely-accepted explanation for the last 10 years.

A handy list of incentives and benefits for electric vehicles in each state- Technology News, FP

Elon Musk confirms that he will step down as Twitter CEO, but will he really step down? Not exactly- Technology News, FP

Six-year-old stumbles on coral fossil from million of years ago in England garden- Technology News, FP

From features to possible pricing, here’s everything we know so far- Technology News, FP