Back when we drove the Nexon EV, it was refreshing, surprising and the best version of the Nexon we had driven. While still a minuscule market, you can tell that Tata Motors pulled off a coup by the number of Nexon EVs you can see on the streets. But at close to Rs 16 lakh for the top model, the Nexon EV was still a bit of a push sell. With the new Tigor EV, the salesperson’s pitch becomes a bit shorter.

What is the Tigor EV?

Adding ‘EV’ to the Tigor name does what you’d expect: swap out the internal combustion engine for an electric motor and a lithium-ion battery. It’s still front-wheel drive and most of the moving parts are up front below the bonnet, while the boot has a bit of a hump where the battery pack protrudes from below. It’s a sub-4m sedan with reasonable accommodations for four, or even five occupants. The Tigor, and by extension, the EV, don’t try to be ‘premium’, so our expectations were well managed. 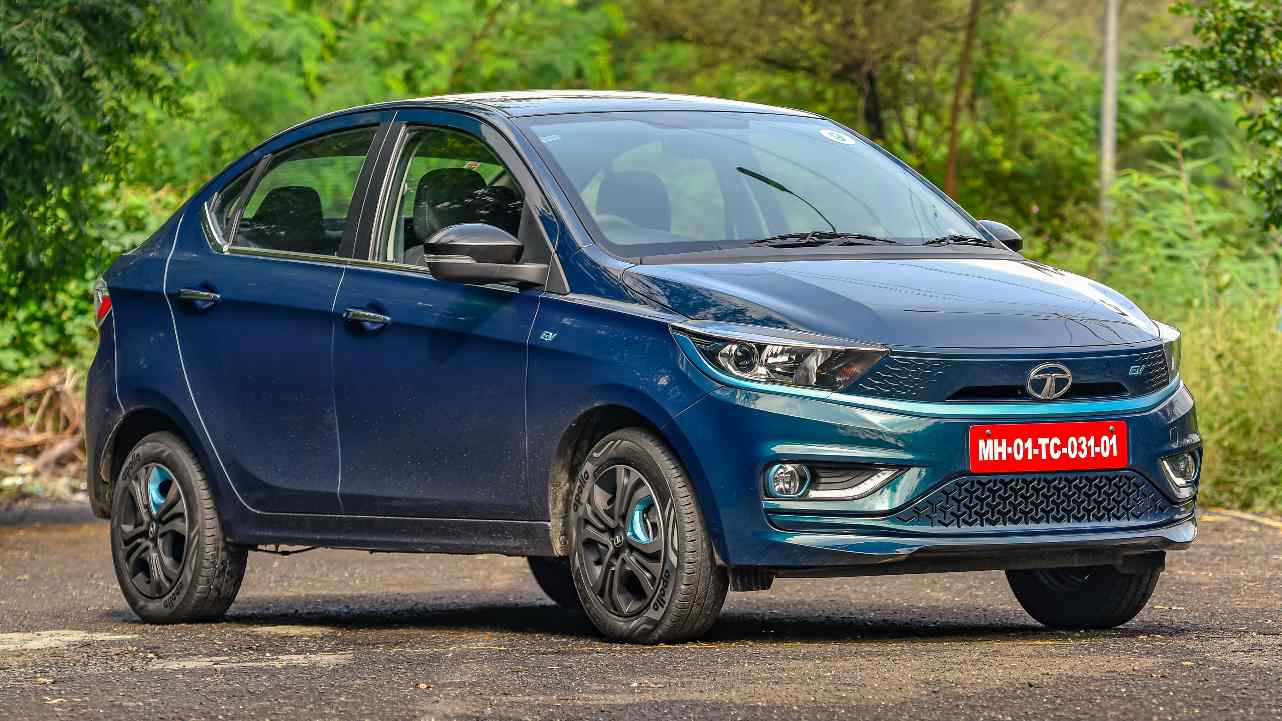 Priced between Rs 11.99 and Rs 12.99 lakh (ex-showroom, before state subsidies), the Tata Tigor EV Ziptron comes in a fair bit cheaper than the Nexon EV, which goes for between Rs 13.99 and Rs 16.65 lakh. Also bear in mind that electric-friendly states such as Maharashtra provide subsidies that could bring the top-spec Tigor EV down to Rs 11 lakh on-road, which should certainly make you think about moving away from petrol.

The ARAI-certified range is rated at 306 kilometres from its 26 kWh battery, but our indicator showed roughly 250km on a full charge. These figures fall short of the Nexon EV’s. We didn’t have a long enough drive to test these numbers, but a colleague at the press drive managed to put in 111 km from a full charge, and still came back with 47 percent charge left. That’s a good sign. While the ARAI-certified range is pegged at 306 km, real-world range is likely to be between 200-250 kilometres. Image: Anis Shaikh/Overdrive

Physically, the key differentiator for the EV version of the Tigor is going to be its striking electric teal colourway. The front grille also sees changes, but not so much as to be jarring. The tyres are basic 175/65s spooned on 14-inch steel wheels. Yes, you don’t have the option of alloys on this vehicle, but the clever wheel covers (identical to those seen on the pre-facelift Tata Tiago NRG) with a colour-matched teal accent make up for this to some degree. The tyres do look small and generally don’t do the side profile any favours. I don’t think the Tigor is a particularly handsome car, but your subjective opinion may differ.

Just because Tata dropped the price and spec on the Tigor EV doesn’t mean you get less to play with. Tata Motors’ iRA connected car suite is present and accounted for and allows you to remotely start and cool the car for those hot days, geo-fence and use a host of security features, lock and unlock the car, check on charge level and so on. TaMo has worked on the “Z Connect” companion app over time, and it is okay to look at, but nobody is about to accuse Tata Motors — or any carmaker — of being UX experts. The iRA connected car suite brings a host of useful functions one can carry out remotely from the smartphone app. Image: Anis Shaikh/Overdrive

The touchscreen interface is as it has been in Tata cars for a while. It’s reasonably responsive, basic and has the same caveats — tiny icons for status indicators that are easily missed. Smartphone connectivity is wired-only, and there’s no wireless charger in sight. The music piped through the speakers is decent and tuned by Harman. I think this is the absolute bare-minimum that you should expect in a car these days. The driver binnacle has no expansive TFT, but a large and comprehensive colour screen for the multi-function display. It is surrounded by the typical idiot lamps and indicators for charge, power usage and regenerative braking. It’s basic —rough-looking, even — but gets the job done.

Interior: basic, with plenty of room for four

Coming to the car with expectations in check, the interior did not disappoint. While the plastics may feel thin and hollow, they do have some interesting textures to make up for this. There’s a fabric insert in the door panels for a bit of a human touch, and a flat-bottomed steering wheel that we’ve already seen in the facelifted petrol Tigor. The dash is two-tone, and the black/beige combo is well-received on other cars. Being an EV, one simply must have electric blue accents everywhere. Thankfully, they aren’t overdone with the Tigor EV, limiting themselves to the trim around the AC vents and the seat upholstery, which is fabric. 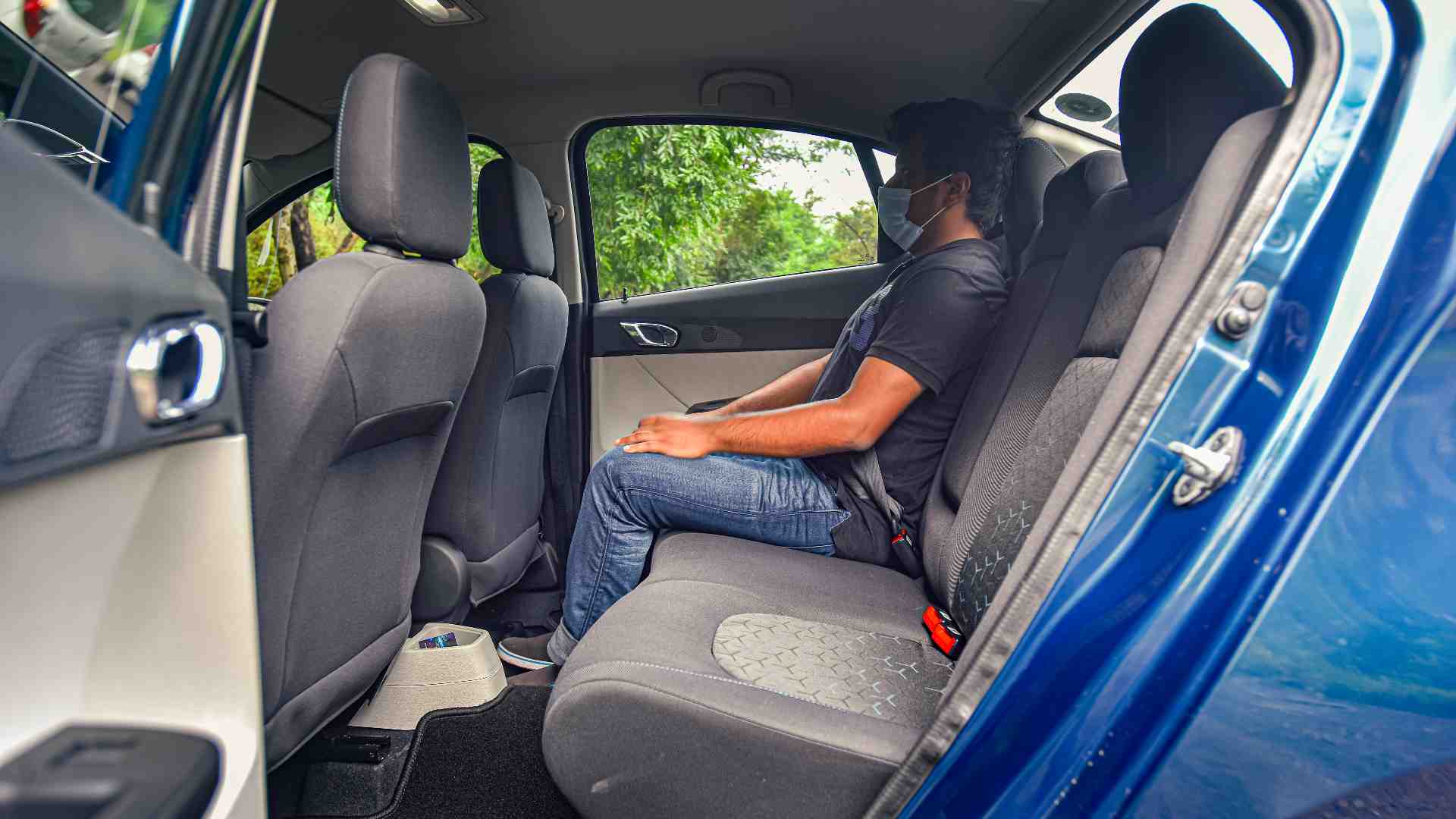 The rear seat in the Tigor EV has enough space for even taller passengers. Image: Anis Shaikh/Overdrive

Room in the second row is fine for two, even for tall occupants. As is the case with most sub-four-metre vehicles, three will be a squeeze, but perhaps not as much as in some other vehicles I’ve been in recently. I’d certainly rather squeeze three-abreast into a Tigor than a Kushaq, for instance. Back in the boot is where the most compromise is to be seen. The battery pack lives below the boot floor, so it is domed, taking away some of the practical volume as well as leaving a trough around the dome that doesn’t help storing things flat. Naturally, there’s no space for a spare tyre down there, so it is placed upright toward the right side of the boot. At 316 litres, there’s still decent volume in the boot, just not as much as in the fossil-fuelled version.

There isn’t much else to speak of about the interior. You don’t get rear AC vents or charging ports, though there is one 12-volt socket placed a little further back near the handbrake that could be used by rear passengers.

On the go: feels more expensive than it is

The Tigor EV has no airs about its performance. There are no selectable driving modes, and the numbers are about what you’d expect from a diesel hatchback — about 75 hp and 170 Nm of torque. However, your mind will need calibrating to come to terms the performance and not be surprised every time. You see, an electric motor doesn’t need to be wound up to deliver acceleration; it does this from a dead stop with equal vigour as higher in the rev range.

Set the Tigor EV in drive mode and you’re off around town just like any other runabout. Performance is adequate in the city, there the convenient creep function just like any other automatic and you can overtake with ease. As you’d expect, the drivetrain is almost dead-silent, but this is a sub-4m sedan we’re talking about, so massive and expensive sound-deadening treatments are not present. You can actually hear the AC compressor more than anything else. Road and wind noise is present, but acceptable. You can certainly get quieter cars in the Rs 10 lakh range. The Tigor EV pulls away from a dead stop like a more expensive car. Image: Anis Shaikh/Overdrive

Put the innocuous (and annoying, as I will later explain) drive mode dial into ‘S’ and the real fun happens. The Tigor EV then pays much more attention to your right foot and delivers its torque with abandon. Off a green light, you’ll easily pull ahead of most vehicles short of a performance car driven with intention, and you’ll do it with no drama or noise. The 170 Nm at zero rpm is the party trick here. The Tigor EV will go from 0-60 kph in a respectable 5.7 seconds (claimed), and it topped out at 120 kph in our testing; the point at which all cars are mandated to annoy the living heck out of the driver with an incessant chime. The Tigor EV pulls away from a dead stop like a more expensive car.

The steering is light, and the suspension seems sorted for this sort (and weight) of vehicle. There were no major crashes or thuds, and body roll is present, but acceptable. The high-profile tyres will probably make bad roads less jarring, but our test car came with overinflated tyres, so we weren’t able to test this hypothesis. What is it with dealers, workshops and hyper-inflated tyres? It makes the car poorly!

Cars are getting so good these days that the differentiating factor often comes down to user experience. This is where I think carmakers still have some way to go. Infotainment system apart, even the simple drive selector knob — a device dropped by corporate cousins Jaguar-Land Rover — is great in theory, but terrible in execution on the Tigor EV. The LED light that indicates what mode the car is in is weak in darkness, and entirely invisible in daylight. The knob itself also has no stops, and you can rotate it 360-degrees wondering whether you’re going to go forward or backward. The only practical way to know what ‘gear’ you’re in is to look at the MFD, which tells you. With state subsidies factored in, the Tigor EV Ziptron is the most affordable electric car on sale today by a big margin. Image: Anis Shaikh/Overdrive

Fit and finish is a mixed bag. Panel gaps, interior plastic fit and paint are on point, but the details are ignored. You can see bits of glue peeking between rubber beadings, and there’s a mass of unsightly wires below the dash on both sides. Thankfully, none of these niggles are hard to fix, and we hope Tata Motors ups its game as customer deliveries hit their stride.

Verdict: If you like the Tigor, why not the EV?

The Tigor is a practical sub-4m sedan, and like the Nexon before it, I believe the Tigor EV is the best variant. You get excellent performance and very practical range for an electric premium. The additional sum of roughly around Rs 2 lakh puts the Tigor EV into a space where you can get more quality and equipment with a petrol engine, but there’s simply nothing else on the market that can compete with the Rs 11 lakh on-road price (Maharashtra, including the early bird state subsidy) of the Tigor EV. If you like the Tigor, there is now nearly no excuse left to avoid going electric.

As Duolingo files to go public in the US, a look at the company’s trajectory over the years-Art-and-culture News , FP