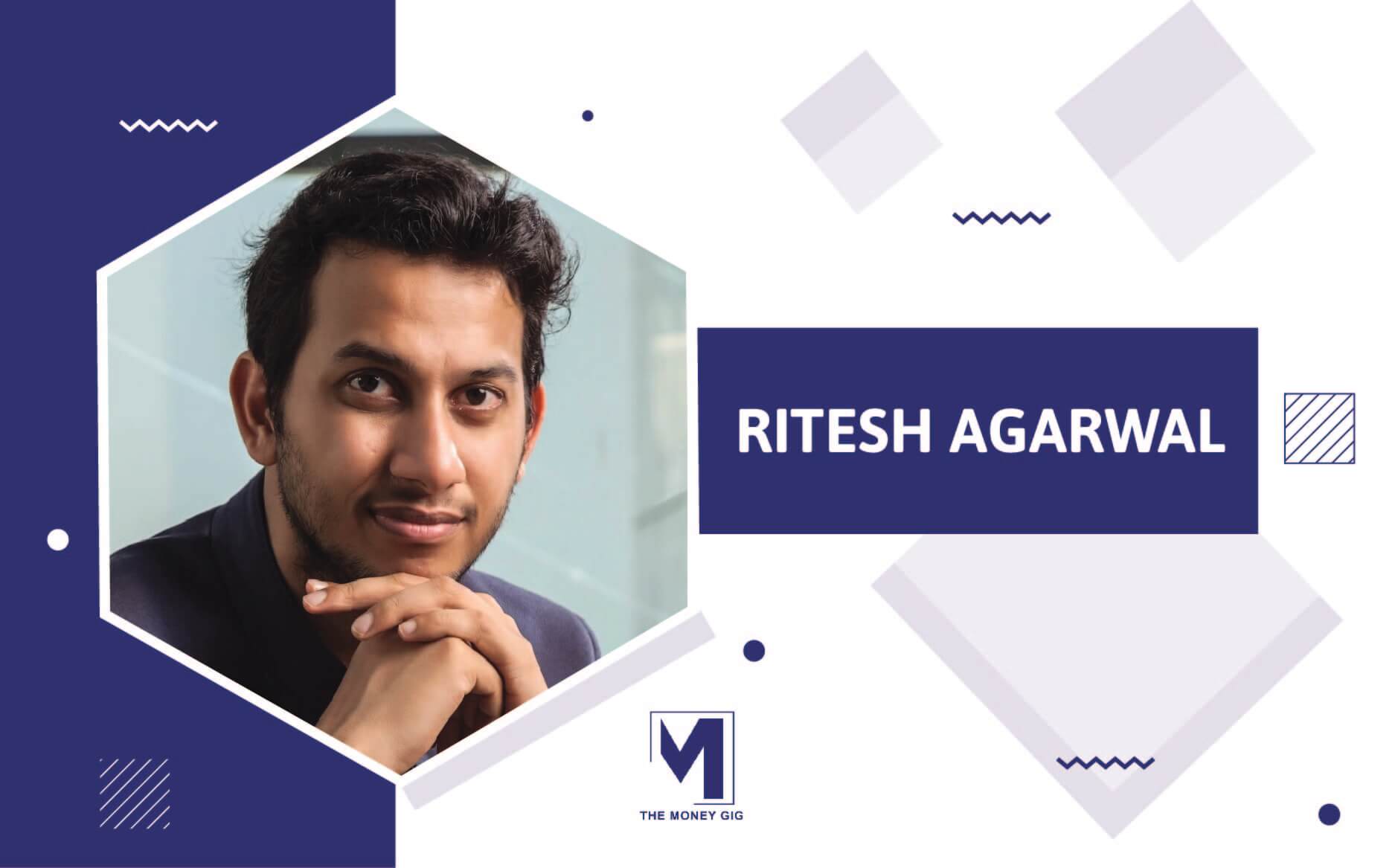 One of the most successful startups in India and the country’s largest budget hotel chain, OYO Rooms has come a long way. With over 23,000 hotels, 8,50,000 rooms and 46,000 vacation homes across the globe, OYO has quickly overtaken the entire hospitality industry in India.

The success of this chain could be attributed to the fact that it resolves pressing issues of guests like affordability, cleanliness, and availability of budget hotels in Tier-I and Tier-II cities in the country. Or, the phenomenal success could be credited to the mastermind of this entire operation – Ritesh Agarwal.

A man with a vision, Ritesh is the youngest billionaire of India at the age of 26. With several accolades to his credit, Ritesh wasn’t born into the business world. Instead, with pure grit and a great idea, Ritesh has made his way to becoming one of the most successful entrepreneurs of the decade. Surely, his journey wasn’t a walk in the park and he had to overcome several difficulties and obstacles to make his unconventional work.

In this article, we cover the journey of the man who managed to single-handedly revolutionize the hospitality industry in India.

An Entrepreneur From The Start

Ritesh has always harnessed the one quality that an entrepreneur must have to be successful; curiosity. During his childhood, while other children were playing, he was busy learning more about computers and software. It was from there that his love for technology grew and he knew he wanted to use this knowledge to build something new.

To pursue his passion, he moved from his hometown to the capital of the country, Delhi, where he enrolled in the Indian School of Business & Finance. He aimed to travel abroad, hence, he joined the University of London’s course.

However, Ritesh couldn’t control his urge to start a new venture, so he took a day’s leave to work on a project. Funnily, he never went back.

A wayfarer at heart, Ritesh had travelled across the country multiple times while growing up. It was during these times that he realised major issues with budget hotels. Using his personal experience, he set out to find a solution, which then went on to become his first venture. At the mere age of 17, Ritesh launched Oravel Travels. Modelled after Airbnb, Oravel Travels was an aggregator of bed and breakfasts across the country.

He was able to grow his business after collaborating with VentureNursery, and accelerator firm that brought investors to nurture young startups. Through this organization, Ritesh was able to secure a funding of 30 lakhs.

However, soon Ritesh noticed that the problem with budget hotels was much bigger than just availability. With an aim to expand and address all the issues guests were facing, he launched OYO Rooms.

While running Oravel Stays, Ritesh stayed at over 100 bed-and-breakfast rooms and realised that he hasn’t touched upon some of the main issues guest were facing. In an interview, Ritesh said, “the big problem was that these portals are not standardised.”

Call it luck, or sheer determination, it was around the same time that Ritesh became the first-ever Indian to be chosen fo the Thiel Fellowship, which is given to entrepreneurs below 20 years of age, wherein they skip 2 years of college to start running their own business. Ritesh was given a $100,000 grant by early Facebook investor and PayPal co-founder Peter Thiel.

With this money, Ritesh decided to pivot the way of his business model to OYO Rooms. OYO is meant to be an abbreviation for ‘On Your Own.’ He said, “One big learning from Thiel fellowship was thinking really big and create an impact, without thinking if anybody has done it before.”

In the OYO model, Ritesh wanted to focus on standardizing the hotels in the non-branded hospitality sector. Basically, instead of owning hotels, OYO tied up with certain hotels and made some basic changes to the hotel, like adding bottles of water, or ensuring they are well-kept.

The model started off with the OYO team reaching out to prospect hotel owners and pitching the idea to them. Once they were on-board, a team was sent to audit the hotel and understand what changes need to be made to standardize the hotel as per OYO standards.

As word caught on, hotels soon started reaching out to OYO, and soon Ritesh knew, he had a potential empire if he played his cards right.

The Rise & Rise of OYO Rooms

In 2014, OYO Rooms secured a funded of 4 crores from the partners or LightSpeed Venture and DSG Consumer at a total evaluation of 14 crores. Since then, the success of the company has reached leaps and bounds.

Becoming the first technology-driven network that allows access to standardized budget hotels in all the major countries of India, OYO quickly became a go-to option for all budget travellers.

It has a major presence in metro cities like Mumbai, Delhi, Bangalore, Kolkata, and others.

In terms of bookings, the OYO Rooms app has over 10 million downloads as of 2019, and more than 300,000 daily active users. Moreover, the app is one of the best-rated on Google Play Store and has been listed in the top three apps in the Travel and Local category.

Building An Empire With OYO Townhouse

The next step to building his empire, Ritesh launched the OYO townhouse initiative in 2016. Acting as a hotel, home, cafe, and store all in one, the OYO townhouse was created with an aim to become the social hotspot of the neighbourhood its located in.

To make this a success, Ritesh rebuilt every single element of the hotel, right from the booking process to the menu. Moving away from the traditional lego-brick approach of most traditional hotels, the OYO Townhouse is designed by taking into account the neighbourhood. Staffed with highly trained managers that strive to deliver world-class hospitality that caters to millennials.

Moreover, along with outstation guests, this initiative also encouraged local guests to use the property and the facilities of the Townhouse to host relatives, conduct business meetings, or just for social catch-ups or Sunday brunches with friends.

By the end of 2017, OYO Townhouses aimed to build a presence in 12 cities in India and since has doubled and thrived in almost every city of the country.

The revolutionary day of September 25th 2018 gave India its latest unicorn startup as Ritesh’s hotel chain, OYO Rooms, received a funding of $1 billion. Led by its existing investors SoftBank Vision Fund, Sequoia Capital, and Lightspeed Venture Partners, the capital infusion came after the partners had already made an $800 million investment in the company.

With this investment, OYO Rooms became India’s latest unicorn private startup valued over $1 billion, and the second more valuable startup in all time.

A Man of Many Talents: Ritesh Agarwal

When Ritesh Agarwal walked in the meeting with venture investor Bejul Somaia in 2015, he was the centre of attention, especially with his rucksack in tow. When questioned about his rucksack, the answer truly surprised everyone and he was one step closer to getting an investment.

Ritesh was used to carrying all of his possessions wherever he went as he was checking into a new room every night. As the founder of an online aggregator of budget hotel rooms at the time, Ritesh wanted to personally experience the challenges and issues guests were facing so he could come up with the best solutions. While Ritesh moved into an apartment shortly after that meeting, the entire ordeal clearly shows his dedication and need to satisfy consumer demand.

In his short lifespan, Ritesh has accomplished many feats, the youngest billionaire in India being just one of them. Some of his accolades include:

Moreover, besides being an entrepreneur, Ritesh is also an accomplished author, coder, and even a brilliant orator. At a young age, Ritesh published a book – A complete Encyclopaedia of top 100 engineering colleges, which soon became a national bestseller.

Also, he started coding at the young age of 8 and at 16, Ritesh got an opportunity to be one of the 240 students who were part of the Asian camp held at the Tata Institute of Fundamental Research.

Additionally, Ritesh was the youngest speaker in the panel of ThinkEdu, which was conducted in 2014, and is a constant speaker at multiple VCCircle Events.

The journey of this young entrepreneur is nothing short of inspiring and motivating. Many young individuals aspiring to enter the business world are taking out pages from Ritesh’s book and following his footsteps to think out of the ordinary to achieve success.

To read about the journeys of other successful entrepreneurs or for tips on how to make it big in the business world, keep reading The Money Gig.

US assures help to India in fight against COVID-19

[The Turning Point] 5 years on, here’s a look at what led 3 former Flipsters to launch B2B ecommerce startup Udaan

If you want startup prices to come down, stop paying higher prices – TechCrunch

This IIT-Bombay grad is bringing astrology and technology together at his startup, Taaraka