Parler, the social network that drew millions of Trump supporters before disappearing from the internet, is back online a month after Amazon and other tech giants cut off the company for hosting calls for violence around the time of the Capitol riot.

Getting iced out by the tech giants turned Parler into a cause celebre for conservatives who complained they were being censored, as well as a test case for the openness of the internet. It was unclear if the social network, which had positioned itself as a free speech and lightly moderated site, could survive after it had been blacklisted by the biggest tech companies.

For weeks, it appeared the answer was no. But on Monday, for the first time since Jan. 10, typing parler.com into a web browser returned a page to log into the social network — a move that had required weeks of work by the small company and that had led to the departure of its chief executive.

Parler executives did not respond to requests for comment on Monday.

After many large web-hosting firms rejected Parler, the site came back online with the help of a small provider near Los Angeles called SkySilk. Kevin Matossian, SkySilk’s chief executive, said in a statement that he was helping Parler to support free speech. For other services required to run a large website, Parler relied on help from a Russian firm that once worked for the Russian government and a Seattle firm that once supported a neo-Nazi site.

Parler’s return appeared to be a victory for small companies that challenge the dominance of Big Tech. The company had sought to portray its plight about the power of companies like Amazon, which stopped hosting Parler’s website on its computer servers, and Apple and Google, which removed Parler’s mobile app from their app stores. 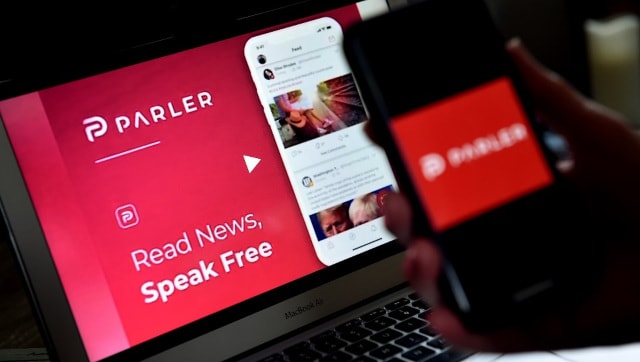 Parler had become a hub for right-wing conversation over the past year, as millions of people on the far right had flocked to the platform over what they perceived as censorship of conservative voices by Facebook, Twitter and Google. Much of the content on Parler was benign, but for months ahead of the Jan. 6 Capitol riot, the site also hosted hate speech, misinformation and calls for violence.

Days after the riot, Amazon, Apple and Google said they had cut off Parler because it showed that it could not consistently enforce its own rules against posts that incited violence. Apple and Google have said they would allow Parler’s app to return if the company could prove it could effectively police its social network.

After Amazon booted Parler from its web-hosting service, Parler sued it, accusing it of antitrust violations and breaking its contract. A federal judge said last month that Amazon’s contract allowed it to terminate service and declined to force the company to keep hosting Parler, as the startup had requested.

Parler had more than 15 million users when it went offline and was one of the fastest growing apps in the United States. It is largely financed by Rebekah Mercer, one of the Republican Party’s biggest benefactors.

John Matze, a software engineer who was Parler’s co-founder and chief executive, said earlier this month that Mercer had effectively fired him over disagreements on how to run the site. Mercer hired Mark Meckler, a leading voice in the Tea Party movement, to replace Matze.

Before the site’s return on Monday, Parler executives had said they were rejected by multiple web-hosting companies that either feared a public-relations backlash or a cyberattack if they agreed to support the site.

On Monday morning, after Parler suddenly appeared on the web again, data behind its website showed that it was being supported by SkySilk. Hours later, Matossian, SkySilk’s CEO, emailed the statement that said he was taking a stand for Parler.

“SkySilk does not advocate nor condone hate, rather, it advocates the right to private judgment and rejects the role of being the judge, jury and executioner. Unfortunately, too many of our fellow technology providers seem to differ,” he said. “While we may disagree with some of the sentiment found on the Parler platform, we cannot allow First Amendment rights to be hampered or restricted by anyone or any organization.”

About a week after it went offline, Parler set up a webpage with messages that said the company was working to get back online and notes of support from conservatives like Sean Hannity, the Fox News host, and Senator Rand Paul, R-Ky.

That page, which was so simple it could have been hosted from a single laptop, still required cybersecurity protections to stay online, in part because Parler has been under attack from internet vigilantes who believe it helped play a role in the Capitol riot.

To stay online, Parler got help from DDoS-Guard, a Russian firm, which raised concerns among some internet researchers that the Russian government could surveil Parler users. Parler also partnered with Epik, a Seattle company, for its domain registration, a basic service of the internet. Epik has helped support other fringe sites that lost their support from other companies, including the Daily Stormer, a neo-Nazi site.

Matze founded Parler in 2018 with a fellow programmer outside of Las Vegas, aiming to tap into growing discontent with Silicon Valley, particularly among people on the far right, who were finding themselves increasingly restricted on mainstream social networks as Facebook and Twitter cracked down on hate speech, threats and misinformation.

Parler is essentially a clone of Twitter, where users can broadcast messages to their followers, though it is harder to navigate and often much slower. It is also dominated by conservatives. The website prompts new users to follow a series of conservative voices, including Hannity, actress Kirstie Alley, and Phil Robertson, star of the reality TV show “Duck Dynasty.”

Parler gained momentum in 2020, particularly after the November election when Facebook and Twitter began labeling posts from former President Donald Trump asserting that the election was rigged. So many new users signed up that at times the flood overwhelmed Parler’s systems and caused the site to crash or slow down.

Ahead of the Capitol riot on Jan. 6, the conversation on Parler turned dark, with users calling for fellow “patriots” to take back the United States and some calling for violence, including coordinated assassinations of Democrats.

In the days after the riot, Facebook and Twitter removed Trump’s account from their sites, causing millions more people concerned about what they saw as censorship to register accounts with Parler. It became the No. 1 app on Apple and Google’s app stores. Then Apple and Google removed the app, and Amazon cut off its service.

Spotify now has over 2 million podcasts, saw an increase of 1,500% in last 3 years- Technology News, FP

UFOs remain unexplained but are no evidence of aliens, says US govt report-World News , FP