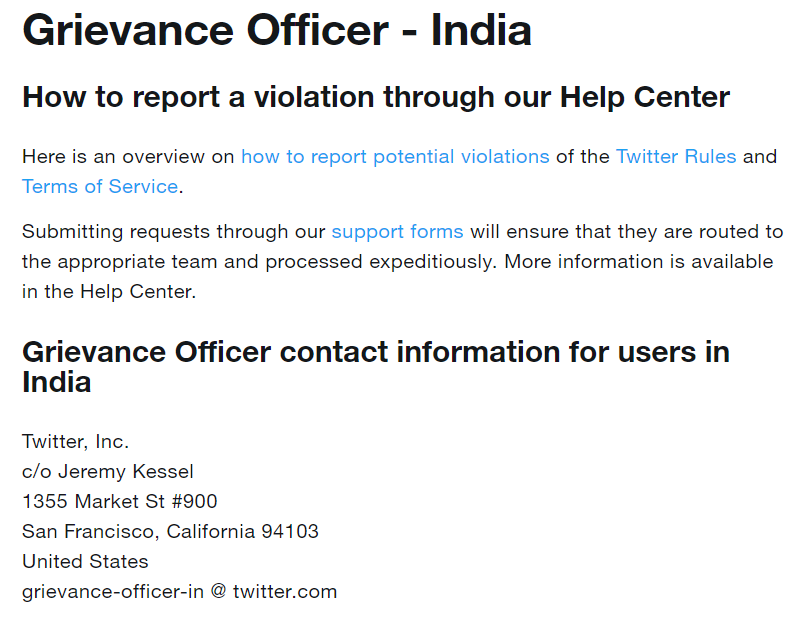 Twitter must perform its statutory and executive duties as a “significant social media intermediary”, the petition reads

Twitter is in tussle with the Indian government, after it tagged BJP spokesperson’s tweet as manipulated media on May 21

A day after Twitter pitched for a constructive dialogue with the Indian government about the new information technology (IT) Rules of 2021 that came into effect on May 26, a petition has been filed in the Delhi High Court against the microblogging website over non-compliance with the said policy. The petition says that Twitter must perform its statutory and executive duties as a “significant social media intermediary”.

The plea was filed by Amit Acharya, a practising advocate at the Delhi high court and the Supreme Court, through advocates Akash Vajpai and Manish Kumar. The petition stated that Acharya came across “defamatory, false and untrue” tweets on Twitter on May 26 and wanted to raise the issue with the Resident Grievance Officer, whose appointment has been mandated under the new IT Rules 2021.

However, Acharya was unable to find the contact information of the officer on Twitter’s website. The petitioner argued that Twitter has appointed a US resident as the Grievance Officer but the same “is not in true sense implementation of the Rule 4 of Information Technology (Intermediary Guidelines and Digital Ethics Code) Rules 2021”.

“The petitioner has a legal and statutory right under the Information Technology (Intermediary Guidelines and Digital Ethics Code) Rules 2021 to raise objection and complaint against any defamatory, untrue and false tweets or post on Twitter before its Resident Grievance Officer as it is a significant social media intermediary,” the plea read.

Social Media Reluctant To Comply With India’s IT Rules

Notably, Facebook is the only social media giant that has confirmed that it will be complying with the country’s IT Rules, and is working to implement operational processes as well as improve efficiencies.

WhatsApp, on the other hand, has sued the Indian government over these policies as it would have to break its encryption in order to comply with certain aspects. WhatsApp has particularly raised objection over the clause that requires social media companies to share details of the “first originator of information” when authorities demand it.

Meanwhile, Twitter is in a tussle with the Bharatiya Janata Party (BJP)-led Indian government , after it flagged a tweet by BJP spokesperson Sambit Patra as ‘manipulated media’ on May 21. In that tweet, Patra had portrayed that an alleged toolkit prepared by the Indian National Congress to amplify the support given to Covid patients was merely a PR gimmick. India’s ministry of electronics and IT (Meity) had reportedly asked Twitter to remove the “manipulated media” tag attached to Patra’s post.

A few days later, Twitter India’s offices in Delhi’s Lado Sarai and Gurugram were raided by a special team of Delhi Police on May 24 evening. Notably, the Delhi Police comes under the jurisdiction of the central government of India, which is led by the BJP.  The microblogging platform has also raised redflags over “the use of intimidation tactics by the police”.

Twitter issued a statement yesterday, raising concerns over the safety of its employees working in India and the potential threat to freedom of expression for the users it serves. It also said that it has concerns over certain aspects of the regulations and wanted to have an open discussion with the authorities.

“We, alongside many in civil society in India and around the world, have concerns with regards to the use of intimidation tactics by the police in response to enforcement of our global Terms of Service, as well as with core elements of the new IT Rules. We plan to advocate for changes to elements of these regulations that inhibit free, open public conversation. We will continue our constructive dialogue with the Indian Government and believe it is critical to adopt a collaborative approach. It is the collective responsibility of elected officials, industry, and civil society to safeguard the interest of the public,” the company said.

TestBox launches with $2.7M seed to make it easier to test software before buying – TechCrunch

Smart Ways to Invest in Your Employees